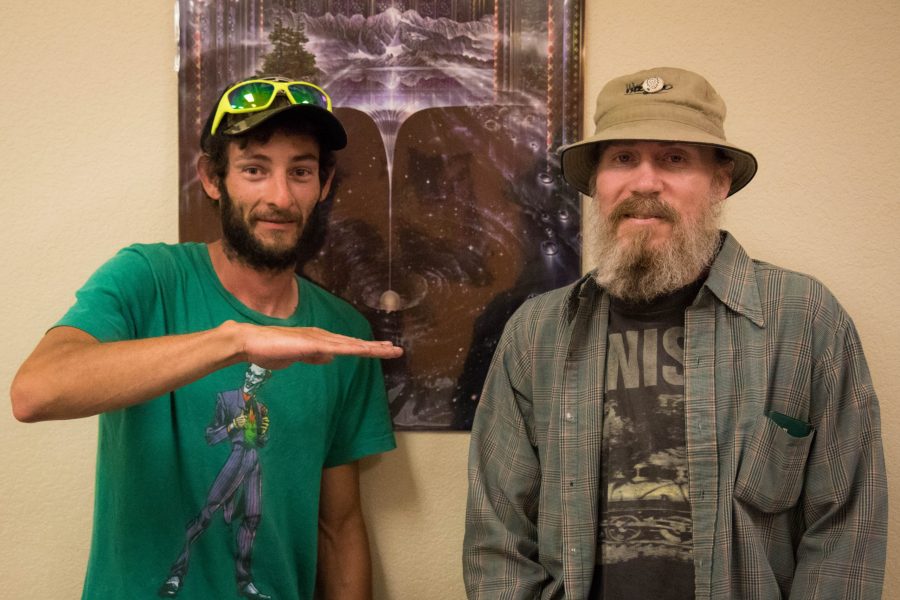 Donald Hailey and Chris Branch, two members of the Flat Earth and Other Forbidden Topics group, meet at the Purple Cup Cafe to discuss topics like the Earth being flat and the Mandala effect. (Julia Trowbridge | Collegian)

Disclaimer: These ideas presented by the Flat Earth Society are not endorsed by any scientific sources.

Flat Earth or Other Forbidden Topics questions what is considered common knowledge today.

Flat Earth or Other Forbidden Topics is the Fort Collins-based group of The Flat Earth Society. The society believes that the Earth is not a sphere, as it was discovered over 2,000 years ago. They believe it is actually flat. Their evidence for this is the fact that these members cannot see the curvature of the Earth, which is around eight inches per mile, according to NASA, and the Flat Earth Society finds the math to be “insane.” They also believe that an ice wall, known to most as Antarctica, holds the water on Earth.

Flat Earth or Other Forbidden Topic, which was founded by John Vnuk in March, meets Tuesdays at the Purple Cup Cafe to discuss ideas like the concept of a flat Earth, the Mandela effect and the idea that space does not exist.

Hailey finds this treaty among nations to be suspicious, supporting the idea of the ice wall.

Some Flat Earth Societies believe that an awareness of the Earth being flat has come about due to the Mandala effect. The Mandala effect, the idea that timelines and realities are crossing over, is supported by small changes that almost go unnoticed, like the “Berenstein Bears” versus the “Berenstain Bears.”

“There’s been a shift of awareness to different things,” said Nate Nichols, another member of the group. “People are starting to look outside of the box.”

“CNN released an identical video in 2010, except for the Earth is spinning in the opposite direction,” said Nichols, claiming this proves that the video is computer-generated. “They computer-generated stars in the background, which makes it a dead giveaway.”

The Flat Earth Society is dedicated to questioning information that has been given to them and believes that they have been lied to for the entirety of their lives.

“It’s a gut-wrenching idea that we’ve been lied to since the `60s,” Nichols said. “The human race stomached (the moon landing). Once you trust the source telling you the information, the depth of lies is astounding.”

The Fort Collins Flat Earth or Other Forbidden Topics group meets at the Purple Cup Cafe every Tuesday at 6 p.m.