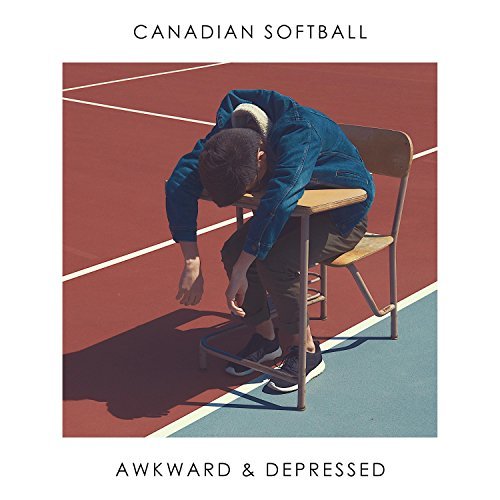 Crowd-funded albums have become a popular thing over the past few years. With an ever-growing list of good crowd-funded albums you might think that it would be difficult to stand out. Canadian Softball is proving with their debut album “Awkward & Depressed” that all they need to stand out is some comedy.

Canadian Softball is a project from YouTuber and comedian Jarrod Alonge. In the same vein as Sunrise Skater Kids and his other projects, Canadian Softball is an effort to make fun of the emo rock scene. From satire to straight parody, Canadian Softball isn’t afraid to pull any punches. This album is the product of a Indiegogo campaign that successfully raised a little over 20,000 dollars. “Awkward & Depressed” will have something for everyone to either laugh at.

“Awkward & Depressed” is a 13-track record that clocks in at around 41 minutes in length. From start to finish, it is diverse, funny and well produced. The hard part making a comedy album is getting jokes to land in the right way, but Jarrod Alonge has had plenty of experience with that with “Friendville” and “Beating a Dead Horse” under his belt. From self-deprecation to politics, no one is completely safe when listening to this record, and that is arguably what serves this record for the best.

Musically, you have a wide variety of music in one record. Everything from early 2000’s emo music to more modern day rock and just about everything in between. While you have slower tempos and rhythms that are supposed to create a somber tone in tracks like “Average Joe” and “Pink Wednesday,” there are also plenty of faster paced tracks that are bound to get your energy building like “Your Validation” and “Lysergide.” Then you listen something like “Ohio Is for Emo Kids,” which is a melody of every popular emo song in the last two decades. It is bound to connect with you in a lot of ways, but at the same time it is something completely different. “Awkward & Depressed” is as diverse with its sound as it is with its jokes, and you can hear just how well produced every single track is.

Lyrically, there is a lot to digest here. Even if you can hardly make out anything on the track “Mumble,” there are plenty of things to laugh at throughout this entire record. This is a record made by people, who just like many others, went through an edgy emo phase. “You Validation” is a track that points that out from the get go. Alonge, who is a massive Star Wars fan, turned one of 2017’s biggest Star Wars memes into a song, “Peev Shalpatine.” Even the greatest generation isn’t safe from Alonge’s jokes as “Great Again” makes fun of the 1950’s values and American ideals. If you always wondered what President Trump’s tweets sound like in song, then “United We Skramz” is the track for you. No matter what, each time you come back to listen to album, you will find something new each time.