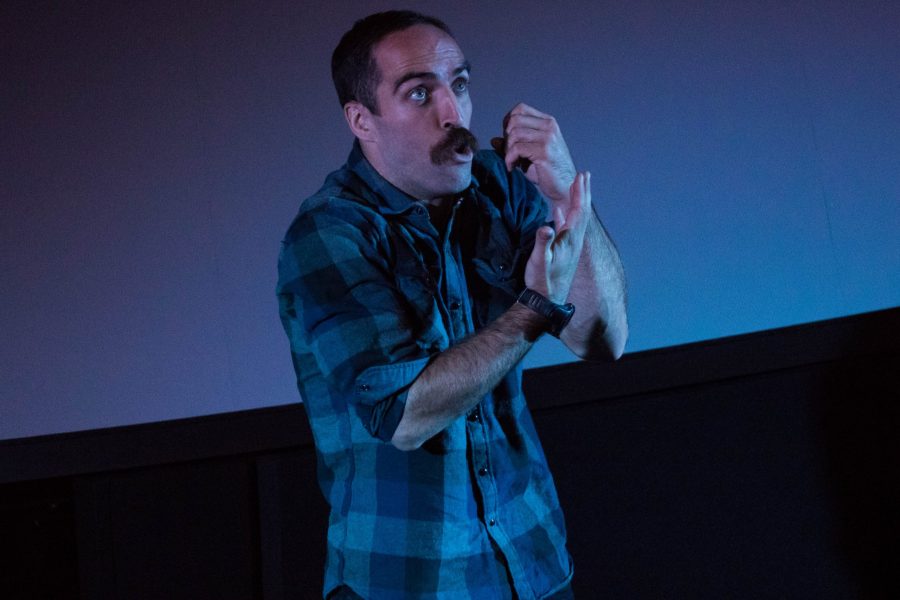 Mike Largent presents Move: A Mountain Goat's Monologue, a recount of his adventure with recovery and fourteeners at the 2017 Fort Collins Fringe Festival (Julia Trowbridge | Collegian)

The Fringe Festival is one of the funkiest things that happens in Fort Collins each year.

Here is an inside look at some of the performers and their experiences participating in the Fort Collins Fringe Festival:

“It was really fun,” said Katelyn Kimbell, an actress who performed in the musical. “All of the cast became friends, and we joked around a lot in rehearsals, which made it really fun.”

Slam-o-gadros, a group of slam poets that performs on the last Sunday of each month, presented “Slam-o-gedden” at the Fort Collins Fringe Festival. This was the group’s third time at the festival, and they decided to do something different this year. Combining poetry and theater, the group performed an improv performance with a environmentally conscious theme.

“Our message is that the stage is sacred,” said Chris Vanjonack, an organizer of Slam-o-gadros. “It can’t be interrupted. And (this performance) mixed spoken word and theater to tell a story with slam poetry.”

Mike Largent, an actor in the Fort Collins area, presented “Move: A Mountain Goat’s Monologue.” This performance was a story about Largent in the mountains. It included a lot of jokes, but he also spoke about his life struggles.

“My performances always affect me emotionally,” Largent said. “I don’t condemn my emotions but revel in them as I relive these circumstances. That’s what it’s all about. I’m creating a window for people to connect to another human and feel validated.”

Largent plans on moving out of Fort Collins soon, but before he goes, he will be guest teaching some classes at La- De- Da Performing Arts.

360 Film at the Otterbox Dome

Jesse Nyander is a cinematographer who documented the Fort Collins Fringe Festival and designed the buttons and t-shirts for the festival, but he also participated. Nyander performed a presentation about the 360 film work that has occurred over the past two years in the Otterbox Dome Theater at the Fort Collins Museum of Discovery. These films take five projectors to create images that surround the audience.

“It (360 film) is a new frontier in film-making,” Nyander said. “Film and theater have been separated for a long time, and 360 film is bringing them together. Fort Collins Fringe Festival is the perfect venue to combine these two arts.”

Johnson plans on expanding the festival even more in the coming year.

“I was so inspired by what I saw this weekend, and I loved seeing the artists to do what they do best,” Johnson said.

Artist’s Pick: “Move: A Mountain Goat’s Monologue”Audience’s Pick: “Under the Stars with Brews and the Bard: As You Like It”Windsor Community House Best of Fringe: “Premonitions”