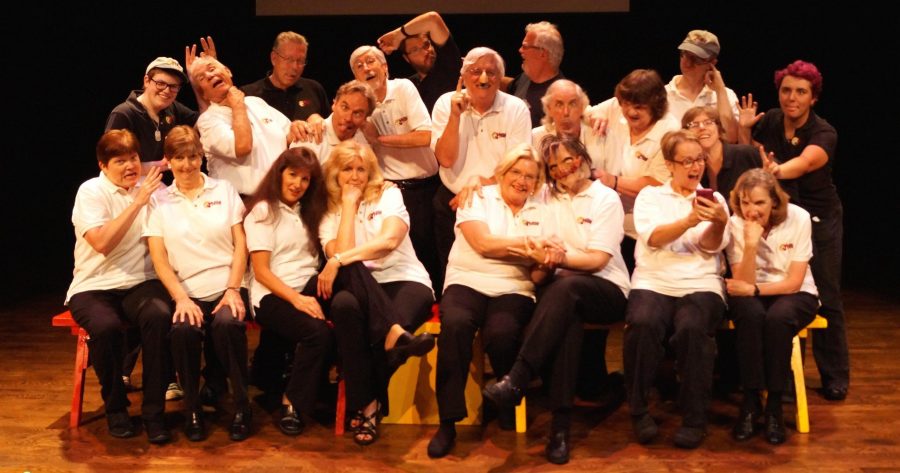 Photo courtesy of: The Mostlies

For the past 25 years, musical parody group The Mostlies has been annual shows in Fort Collins. Their songs entail local and national topics, covering everything from politics to lifestyle issues. Their 2017 show, “Parody Tonight!: 25 years of Fake News,” alternates new songs with select older songs.

The Mostlies began as tom foolery in 1992, performing at the Foothills Civic Theater, before changing names and moving to Fort Collins in 1993. They perform one show every year, except during years of federal elections, in which they perform a show the week before Election Day in November.

Betsy Noland and Betsy Kellogg are co-directors of the show and were founding members of The Mostlies, Noland credits the variety and quality of the song to the collaborative process The Mostlies share together.

“We have a lot of fun,” Noland said. “People submit this material, but through the rehearsal process, it evolves as we add visual bits to the music. Words get changed, and we add taglines.”

Creativity is not all fun, of course.

The most recent song was written after Sean Spicer resigned as Press Secretary on July 21.

Shelley Johnson, who teaches math and science to pre-schoolers, has been a writer since 2008 and on stage since 2010. Johnson was recruited after another member saw her performing some limerics for the public. She did not have any performance background before joining The Mostlies, but her relationship with the other group members is what keeps her coming back.

Patty Bell has been performing with The Mostlies since the beginning. She started as a writer before deciding to also perform. One of her favorite songs is titled “AARP,” a parody of The Village People’s “YMCA.”

Although The Mostlies do not begin preparing and rehearsing in earnest until the new year, they are actually working on new material all year.

“We’re always reading and listening to the news and observing human nature and looking for what we can make fun of,” Bell said. She said that people often give them ideas off the street, offering suggestions or hopes for topics they would like to see the next year.

Co-directors Kellogg and Noland balance the audience’s desire for local material with their own desire for the political.

“The situation now is just ripe for it,” Kellogg said.

On the show’s 25th anniversary, it has been difficult for some cast members to grasp that they have been performing for that long.

“It’s crazy,” Noland said. “My daughter was a year old when we started, and now she’s in the light booth doing projection.”

Kellogg, who is also a writer, said her relationship to the parodies has changed over time, especially the ones about aging.

“All of those things we thought we’re so funny, really aren’t now that we’re arriving at that age,” Kellogg said.

“As long as people keep coming to see us, we’ll keep doing it,” Noland said.

Noland is always impressed at the appreciation of the audience.

“After the show, they say, ‘thank you for making us laugh about these things,”” she said.

The Mostlies will continue their performances at the Lincoln Center Thursday, July 27 through Sunday, July 30.