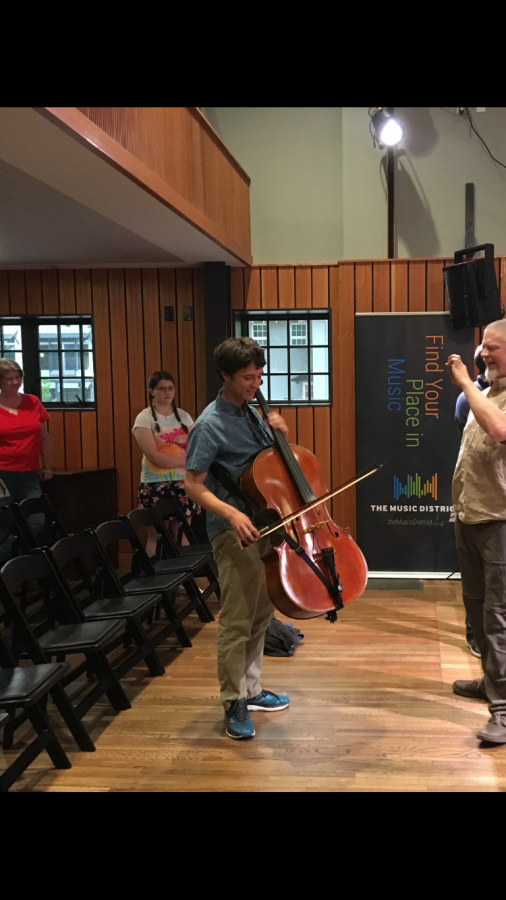 The workshop was part of the Silk Road Ensemble’s circuit in Colorado. The circuit began Monday at New Belgium with a screening of Yo-Yo Ma’s documentary “The Music of Strangers” and will continue through the week with a performance on Friday at The Stanley Hotel in Estes Park on Friday and a children’s show at The Music District on Saturday.

The Silk Road Ensemble was formed in the summer of 2000. According to Shanahan, its purpose is to explore music by combining the music of different cultures.

“The idea initially was to explore the historic Silk Road train route as a metaphor for cultural exchange,” Shanahan said. “It started off as a music exploration. We got together musicians from all across the Silk Road region combined with western musicians and commissioned a lot of different pieces and composers to write pieces for that unique combination of instruments. Since then it’s evolved over the years to incorporate a lot of different people. It’s more of a metaphor now than it is a literal Silk Road idea. We’re using that idea as a way to explore many different kinds of cultural collaboration and cross-cultural exploration of those things.”

The group aims to collaborate in a way that will celebrate different cultures.

“I was always interested in this idea of cross-cultural collaboration,” Watanabe said. “One reason is that in order to do a true organic collaboration, we’re not losing our own color and flavor, but we’re actually bringing our distinct flavors and colors together in a way that they enhance each other.”

The group began with a song written by Shanahan called “Oil Field Fires.” According to Shanahan, the song was inspired by seeing pictures and video of the invasion of Kuwait and the oil fields that were set on fire.

The group demonstrated their unique instruments from around the world. Watanobe introduced a variety of Japanese transverse flutes such as the noh kan, ryuteki and shinobue.

Block started his segment by playing a song by Bach on the cello. He was originally classically trained, but later branched out from classical music.

“There was a certain point in my life when I realized I liked to listen to non-classical music as well,” Block said. “I realized I wouldn’t be truly happy as a professional musician unless I tried to play all the types of music that I enjoyed listening to. A big part of what I’m passionate about professionally is learning music from different cultures and finding different ways I can use the cello.”

The last song the group played was a mash-up of the Indian song “Raghupati Raga Raja Ram” and the American song “Where the Soul Never Dies” by Hank Williams Jr. After the set, the Silk Road Ensemble musicians took questions and let the audience play the instruments.

Audience members Liam Kimball and Dan Seese were blown away by how Shanahan played the riq, a type of tambourine.

“It was really cool seeing all the different types of instruments tonight,” Kimball said. “That was the first time I was introduced to that sort of thing with the drummer. I liked how he changed what is commonly known to be heard from an instrument; he’s manipulated it.”

“The riq was amazing,” Seese said. “What he could do with it was beautiful.”

Kimball was fascinated with the way the Silk Road Ensemble blends different cultures and music.

“It introduced me to the idea of the cultural connections with music and how they’re trying to blur the line between culture and music,” Seese said.

For Seese, the workshop was inspiring.

“I think for me it’s to reconnect with doing music,” Seese said. “I used to play all the time. I put my guitar down 15 or 20 years ago. This was an inspiration to pick it up again.”