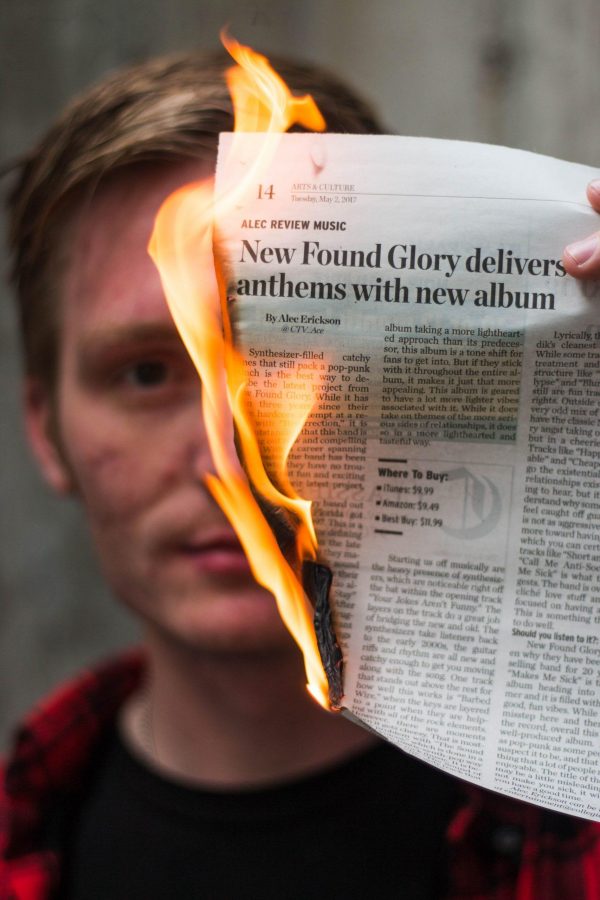 Every day, we are all around music in one way or another. Whether it’s advertising that clouds our news feeds, or we are just listening to our favorite records, we as human beings are constantly listening to, evaluating and, dare I say, criticizing music. I am not that different from anyone else who listens to and judges music. I just get paid to do it.

To better understand who I am as a critic who has now been published over 100 times, we need to start with how I got this job. It was luck and circumstance above all else. I came to CSU to study journalism, and I never thought I would actively write for the Collegian. I came here to become a broadcast journalist, but life has a crazy way of changing our plans.

Before “Alec Reviews Music,” there was “Danny Reviews Music.” Danny Bishop wrote about everything at the time. It was my sophomore year of college, and I almost religiously would pick up a copy of the Collegian every time I saw his byline. I loved being exposed to new and different forms and music, and he had the most unique taste in music. Little did I know, the arts and entertainment desk was looking for a new person to write music reviews.

Fortunately, I practically lived in the newsroom (still do). One day, the arts and entertainment editor Hannah Ditzenberger and I were in there at the same time. She asked me if I knew anything about music and if I was willing to write about it. I said I would give it a try and see how I liked it.

One week later, my first review was published. It was on the Silversun Pickups’ “Better Nature.” I was beyond nervous for it to go out because, at the time, I thought I was a little too harsh on it. Sure enough, within hours I received a comment online calling me an ass, and that pretty much cemented me as a wannabe critic. I felt like I tried too hard to be balanced. Giving pros and cons and coming up with a final score was a little difficult. But, in that same day, the review received almost 2,000 page views online.

After that, I had editors essentially begging me to continue writing reviews. So, I did one here and there when I felt like it. Each time being a little less timid of criticizing an album. Then arts and entertainment got changed to arts and culture, and my editor became Randi Mattox, who thankfully pushed me to write one review every other week, which progressed to one review a week, which progressed to where I am now, writing two to four reviews a week.

Now, I’ve been published over 100 times. This has not only helped me in my confidence as a writer but helped me gain a deeper appreciation for music.

As someone who has been to more concerts than I care to count, I have always been dependent on music. I could talk about some of the performances that I have seen and how memorable they were, but it is always about the music itself. Just like most people, I have certain albums I can point to and say that they changed my life. I have albums like Frank Turner’s “Positive Songs for Negative People” that got me out of one of the lowest points in my life. There are also albums like Quiet Company’s “We Are All Where We Belong” that helped me give up on religion. There are countless albums for a countless number of scenarios that I can point to and tell you exactly what it means to me.

I think all that started for me when I was 12. My dad gave me every record he had at the time and told me to enjoy it. For someone who was in the most formative years of their life, that is exactly what I did. I gained a deep and emotional connection to the music of Eric Clapton, Van Halen, Descendents, Pearl Jam and countless other classics. Back then, I had nothing but time. So, I did what anyone would do with a physical record and listened to it from start to finish repeatedly.

This is something I try to address within all my reviews, what it is like to listen to an album from start to finish. At the end of the day, there are still artist that make a concept album that is designed to be listened to that way. An artist is always trying to deliver something to you that has some meaning.

I think the most important thing when it comes to what I write is telling readers what the good and bad are within an album. While I get criticized a lot for negatively talking about an album and still suggesting that people listen to it, I think it is important to tell readers what they are getting into when they pick up an album. I’m not going to lie. I just want readers to think more critically of the music they listen to and it means to them.

At the end of the day, I’m still adding music to the collection my dad gave me in hopes that I can pass that along. “Alec Reviews Music” is a documentation of that process. I just want to expose as many people to as many types of music as possible. Whether you think it is good or bad is up to you. I’m just sharing with you my opinion. Go ahead and call me an ass if I say something bad about your favorite artist. It’s not going to change what I write. So, sit down and pay attention. I’ve got one more semester left here at CSU, and I’m going to teach you all a thing or two about good music.