The Rocky Mountain Collegian • May 2, 2017 • https://collegian.com/articles/aande/2017/05/from-bean-to-bar-fort-collins-nuance-chocolate-makes-exotic-chocolate-from-internationally-sourced-beans/ 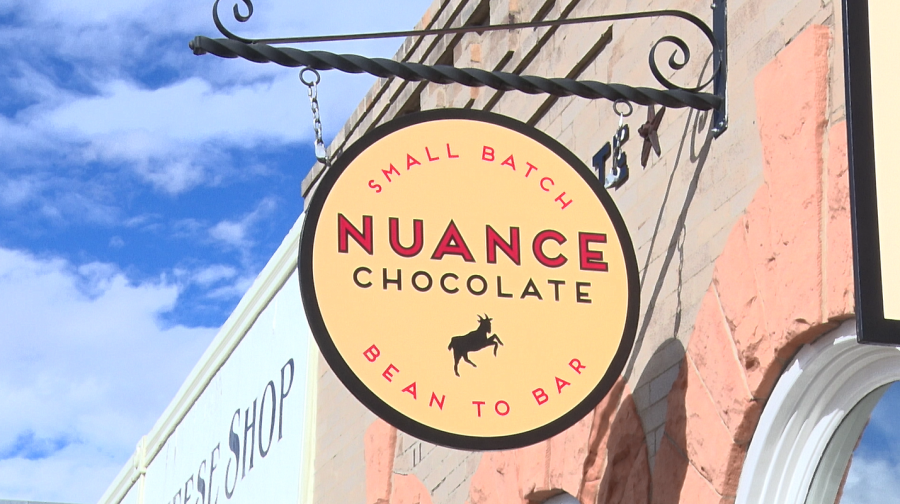 It is nigh impossible to tour Old Town and not run into a business in the likes of the Bean Cycle Roasters, New Belgium Brewing or Happy Lucky’s Teahouse, paragons of their respective brewing industries.

With the addition of Nuance Chocolate, it appears yet another industry is claiming Fort Collins as its capital. However, it is not one that brews coffee, beer or tea, but chocolate.

Nuance Chocolate is one of the only few—and growing—true bean-to-bar producers in the country. This means they buy the beans and do the rest entirely in-house. In this small classification of businesses, Nuance Chocolate stands out as one of the best.

“We got the largest selection of single origin chocolate of any chocolate maker in the world,”Toby Gadd said. co-owner on Nuance Chocolate.

Before reaching this level, chocolate making was just a mutual interest for Toby and Alix Gadd.

“My wife and I were kind of obsessed with the whole chocolate process,” Gadd said. “We were the kind of kids who would trade any low-grade Halloween candy for our sibling’s chocolate.”

“It’s a pretty esoteric hobby,” Gadd said. “Not many folks do it. A lot of people get carried away in various passions and chocolate was ours.”

After some research, the Gadds soon invested in a chocolate business they equally own and operate.

“I compare it to a home brewer who enjoys making different beers and opens up a brewery,” Gadd said. “That’s a lot like the Nuance path.”

And business has been good for the chocolate makers.

Nuance Chocolate’s beans are all ethically and sustainably sourced from 20 different regions around the globe. One such bean, the Peru Marañón, is the rarest in the world.

Thought to be extinct until 2010, the variant of the cacao tree was rediscovered in the Marañón Valley of Peru. Since then, it has been featured in the New York Times and on “Anthony Bourdain: Parts Unknown.” Its distinctive white color has earned it the nickname the mythical white bean of Peru, and it makes for fantastic apricot-flavored chocolate.

While it makes sense for coffee beans of different sources to make different tasting products, choice of cacao bean is not commonly thought of as having an effect on chocolate.

“We grew up believing that the same way some of us grew up thinking that, say, Kraft Singles was cheese,” Gadd said.

Between the cacao fermenting and roasting processes, over 600 different flavor compounds can be at work in a single batch of chocolate. That makes chocolate “about three times as complex as red wines,” Gadd said. “(Chocolate is) one of the most complex foods that we eat.”

Toby and Alix Gadd’s discussions of such nuances are what the name Nuance Chocolate emerged from.

Nuance Chocolate presents this complexity in the form of taster flights, sample platters of five different single origin dark chocolates. One flight could showcase the nutty Forastero cacao of Fiji, or Nicaragua’s Trinitario cacao with notes of caramel and tobacco.

When Smith decided to try out a Nuance Chocolate flight over a year ago, he was immediately blown away.

“I had no idea there was this whole world of single origin, bean-to-bar (chocolate),” Smith said.

The very next day he applied for a job.

He discovered working in a chocolate factory carries a number of unique quirks.

“My first day working in the factory, they discovered that I have rather hot hands,” Smith said.

This meant the task of handling the finished chocolate was relegated to his colder-handed coworkers.

Among the products, Smith helps make at Nuance’s Oak Street factory are the single origin dark bars, flavored and milk chocolate bars, truffles and a must-try iced chocolate drink, which manages to stay frothy despite its temperature.

With the opening of an online store, Nuance Chocolate hopes to attract customers beyond the Fort Collins. Already, customers influential in the international chocolate community are spreading the word.

“As our reputation spreads, so do the number of suppliers who are contacting us,” Gadd said.

Nuance Chocolate has not yet crossed the boundary into the realm of a nationally recognized brand, a transformation it seems poised to undertake. Until that happens, it will remain Fort Collins’ own little treasure.

Collegian reporter Matthew Smith can be reached at entertainment@collegian.com or on Twitter @latvatalo.