The Rocky Mountain Collegian • May 1, 2017 • https://collegian.com/articles/aande/2017/05/csu-theatre-masterfully-presents-little-shop-of-horrors/ 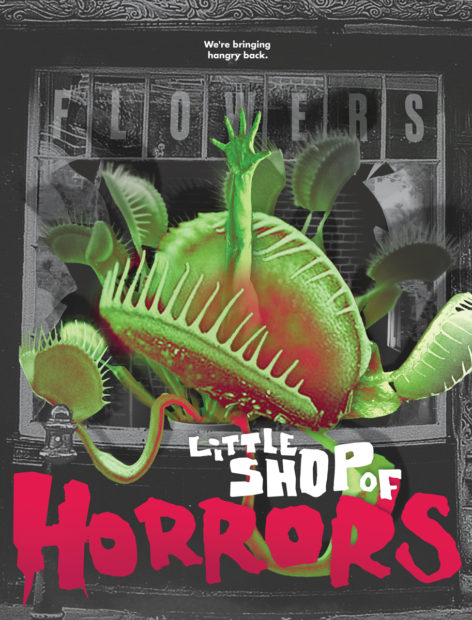 For those of you familiar with “Little Shop of Horrors,” you know that it is a goofy, fun-filled show with plenty of laughs along the way. While the University Center for the Arts’ production is not necessarily movie caliber, it certainly shares those same qualities.

The cast and crew are utterly fond of the show, calling it “the show that got them into theater” and “one of their dream roles.” But, it was not just the show that they all love.

“Everyone works so well together,” said Margaret Carr, a member of the ensemble. “The cast is such a family.”

They are also, rightfully so, proud of the work they have created.

“Every single person is in it to win it,” said Brandon Fisher, who stars as Seymour Krelborn.

Fisher and the rest of the cast also sang praises for the show’s director, Dr. Jaura Jones, who refers to herself as a “shopper” rather than a director. Fisher explained that being directed by Jones, who “never really said ‘no,'” allowed the cast the freedom to make their own acting decisions.

More specifically, the cast is also proud of the plant, known in the show as Audrey II.

Props Master Megan Ross detailed the puppet used in the show, calling it “a weird mixture of props, costumes, actors and scenic (design).”

All of the enthusiasm from the cast was well worth it, as the final product was spectacular. With such a small cast, everyone was working double time to ensure that the production was as flawless as possible. Special standouts were Brandon Fisher (Seymor Krelborn), Liam Kelley (Orin Scrivello, D.D.S.) and the Plantettes (Abby Russell, Kaya Rudolph and Charlotte Nickell).

The singular set for the show was a massive turntable, topped with a flower shop decorated in grey-scale. The design lent itself perfectly to the first half of the monotonous and Skid Row-based story, making the bright green of the plant pop during the second half.

The famous plant was nothing to discount either. Constructed by the cast and crew as a massive four-person puppet, Audrey II and all of its voices and laser-pointer eyes were an innovative marvel for such a small production.

Also of obvious importance were the costumes. Designed to set the characters apart from their dull backgrounds, they managed to fit every scene with ease without placing the show in a specific time period, which is exactly the way it was always intended to look.

Finally, and perhaps most importantly, the show offers a realistic commentary on abusive relationships, clearly condemning them and encouraging those trapped in them to reach out to the ones they love.

One scene in particular showcases the Planettes facing off against the abusive Orin Scrivello, in which they stand up for their friend, much to Scrivello’s dismay. The scene was powerful in the fact that the abuser is entirely antagonized and satirized in a way that makes him look like a fool for doing what he does, certainly a message worth applauding on a college campus.

It is no wonder that, with such a powerful message and such an enthusiastic crew, the School of Music, Theater and Dance has created such an endearing production of the 1980s classic, “Little Shop of Horrors.”

Upcoming performances of “Little Shop of Horrors” will be at the UCA May 4, 5 and 6 at 7:30 p.m and May 7 at 2 p.m. Tickets are available at csuarttickets.com.