The Rocky Mountain Collegian • May 10, 2017 • https://collegian.com/articles/aande/2017/05/alec-reviews-music-flobots-provide-protest-songs-for-the-modern-age-with-noenemies/ 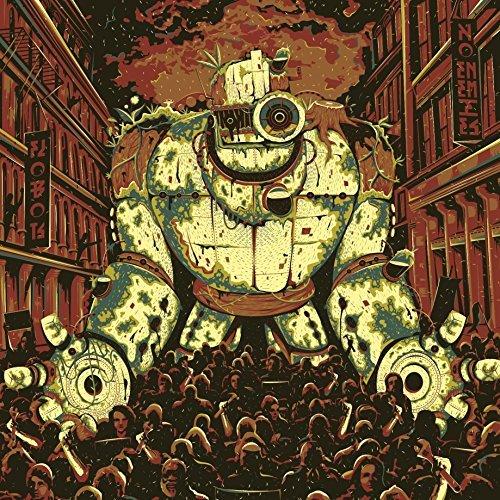 Successfully crowdfunding an entire album is no small feat. However, Flobots made it look easy when they did just that. The band, which has taken activism to a whole other level, is back to do it again with another album. This time gearing the music to represent the current state of the nation and give fans and new listeners alike something to sing along with. Flobots have always been socially active in the world, and “NOENEMIES” is the perfect representation of that.

For Denver’s own Flobots, combining hip-hop and rock has always been a niche. For this outfit, though, they never struggled with standing out. Their debut album “Fight With Tools” was a mainstream success. Taking on grassroots issues and bringing attention to causes that always needed it has been a trademark deal for the band. MCs James “Jonny 5” Laurie and Stephen “Brer Rabbit” Brackett have a unique chemistry on every track and have managed to always complement one another. The band would go on to release two more albums “Survival Story” and “The Circle in the Square,” both of which did well on the charts respectively. While most people may know the band for their single “Handlebars,” they are more than just one hit wonders and their fourth-studio album “NOENEMIES” proves just that.

“NOENEMIES” is a 17-track record that clocks in at just over an hour in length. While it has been five years since their last release, Flobots certainly show no signs of slowing down with this record. This album is geared towards one thing: motivating and educating people on the issues of this country and what they face. Struggles are one of the main themes of the record and there is a lot to take in at once. Enough so that it will keep you coming back to listen time and time again.

Musically, this record is a lot more raw than previous efforts. It does not sound as sharp around the edges in how it was produced and actually helps drive home the message it is trying to convey. There are some tracks that are not as layered as you might think with the beats and rhythm. “Carousel” is right off the bat one of the few tracks that you know what you are getting into. Then you get tracks like “American Dreams” and “Buried Alive,” which are more slow builds when you listen to them. Overall, this album is put together so it has the perfect number of peaks and valleys from start to finish. Tracks like “Failure Games” and “Sleeping Giant” are a lot of fun to listen to.

Lyrically, it is hard not to be moved by a lot of the content within this record. “NOENEMIES” is a lot more real in the sense that you can feel the intensity of emotion that goes into each track. Tracks like “Pray,” which take all the anger against the presidential administration and boils it down into a single track, takes a lot of effort. Flobots certainly knew what they are doing with their songwriting this time around. “Rattle The Cage” or “Voices of the Dead” are designed to rile up the masses and get people moving. Essentially what it comes down to, is that Flobots took the energy and emotions of a protest and that is what it is like to listen to “NOENEMIES.” From start to finish they are just so many issues to cover, and the band did it both in a tasteful and respectful way that warrants some praise.

What Flobots have managed to create here with “NOENEMIES” is something more unique and uncommon than anything we have gotten in years. This is one of the few records that I cannot stress enough how important it is that you listen to it from beginning to end. There is a lot to unpack with each listen through and you are constantly finding news things here and there that you did not notice before. While a lot of the subject matter is serious, it also has some fun with it as well. Flobots are making music for the people with this record. This is a more real effort and a more real band than anything we have heard before. “NOENEMIES” gives us a whole new Flobots and there is a lot to appreciate.