‘The (Blank) Monologues’ brings stories of abuse, consent and much more to the LSC 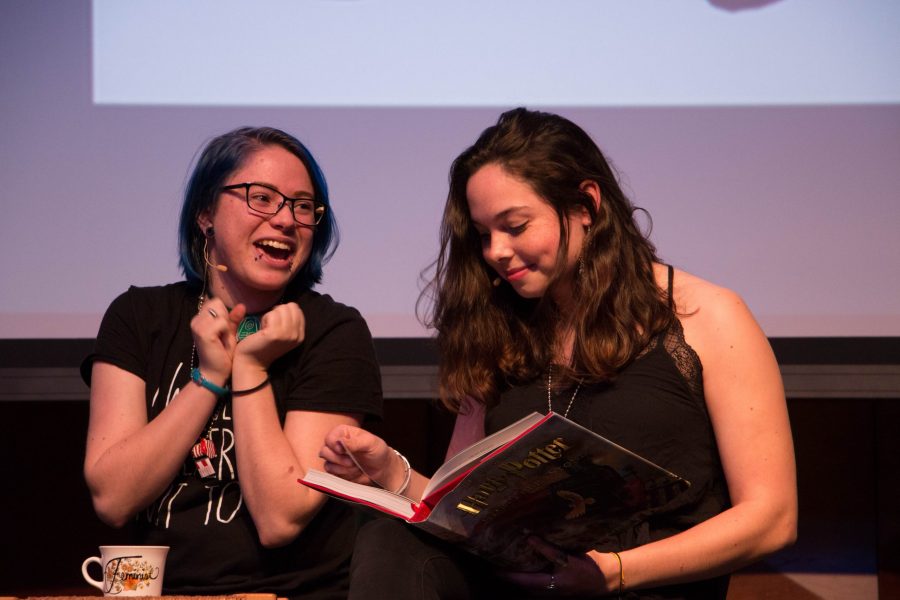 Members of the Red Whistle Brigade use a tea party skit to explain the laws of consent in Colorado. (Chapman Croskell | Collegian)

The cast of “The (Blank) Monologues” used personal stories, entertaining skits and bad tea puns to bring light to issues on campus that they care deeply about.

“I think the biggest thing I noticed, especially this year, is that it gives people a space to talk out loud about things that are very personal to them,” said Brenna Carter, senior psychology and international studies major, “things that people want to get off their chest and share with the world, but don’t really have a place to do that.”

Carter, who performed a piece discussing white feminism with her partner Samantha Swain that parodies characters from the musical “Wicked,” was one of many performers who used the space to bring up a topic that she is passionate about.

Also included in the monologues were slam poetry pieces regarding topics such as rape, a video titled “Periods aren’t that gross” and even a skit from the Red Whistle Brigade.

“We know that these conversations can be kind of hard to talk about, so we try to do it in a humorous kind of way,” said Whitney Gustafson, junior ethnic studies and sociology major and member of the Red Whistle Brigade.

The video on periods and many of the skits such as one where cast members read out humorous text conversations from services like Tinder had the audience filling the theater with laughter and broke up the more serious nature of other pieces. Gustafson, who has been working with the Red Whistle Brigade for two years and also presented two of her own pieces during the show, said that the event forces people to think about topics they might not always be comfortable thinking about and that it also helps in the healing process for many of the cast members.

“The (Blank) Monologues” is the creation of Bailey Cross, a junior political science major. As part of the Puksta Scholarship she receives she needed to create a social justice project on campus. Cross said that she was inspired by “The Vagina Monologues,” but wanted to create something more inclusive.

“It’s really opened up the door for students to talk about things they’re passionate about and issues they think need to be worked on,” Cross said. “I saw this really big issue with issues like sexual assault and domestic violence that people weren’t talking about, so we wanted to create a platform for students to put those issues out in the open.”

This was the second year of “The (Blank) Monologues” and, even though Cross is graduating next December, she said that she hopes that the event is something that can become a CSU tradition.

The crew began workshopping in September and held auditions in December. Following this, the cast met weekly to work on their monologues. Cross said that the cast and crew have grown close over the few months that they have been working together and that it has been one of her favorite parts about producing the show.

For the entire cast the show had become a space that they can feel comfortable talking about topics that they are passionate about.

“The show really brings people out of their comfort zone and helps to normalize these issues,” said Demi Serrano, junior biology major who discusses being a first-generation Latina student at a predominately white institution. “It really opens doors for more conversations on the topics.”

The show was performed on March 31 at 7 p.m. and April 1 at 4 p.m. and 7 p.m.. Due to the nature of the of the topics, viewer discretion was advised. A toiletry drive was also held before and after the show to benefit Crossroads Safehouse. According to the event page items that were especially needed were full-sized soap, shampoo, conditioner, toothpaste and feminine hygiene products.

The topics discussed during The (Blank) Monologues are ones that are critical to society but are not always brought up. Cross said that she was very excited to have produced such an important event.

“You can’t really solve an issue if no one is willing to talk about it,” said Cross. “I think it’s such an important event to have on campus.”

Collegian Social Managing Editor Chapman W. Croskell can be reached at Entertainment@collegian.com and on Twitter @Nescwick.