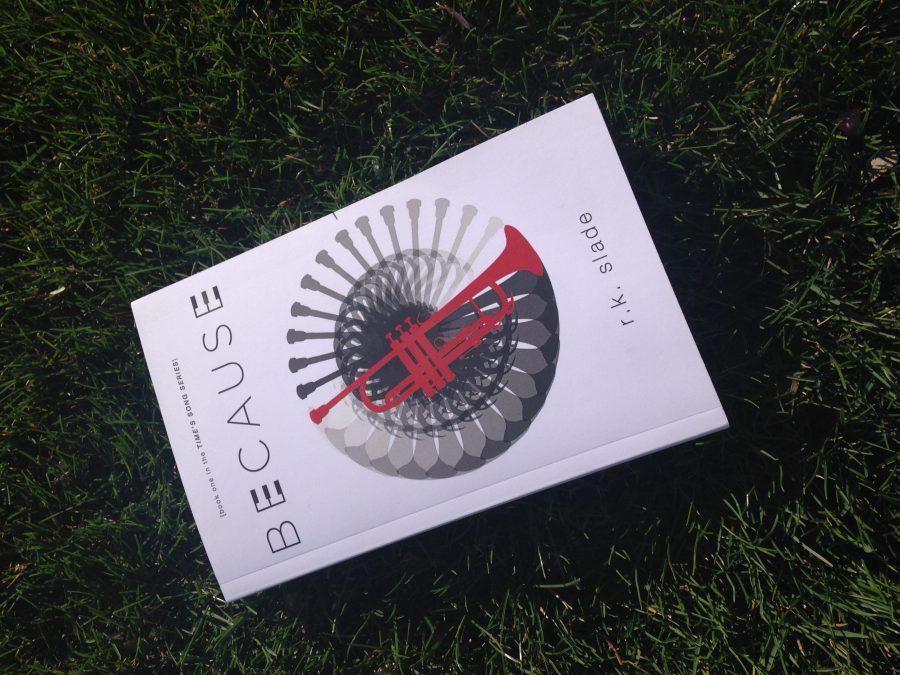 "Because" by R.K. Slade drew enormous attention from the marching band world with an accurate depiction of a music-focused lifestyle. Photo credit: Mckenzie Moore

“Because” by R.K. Slade recently skyrocketed up the Amazon bestseller charts in the music genre, quickly drawing attention from the nationwide marching band community. The story follows the adventures of Rigby Raines, a trumpet and piano player in her high school marching band who travels back in time to take music lessons from Ludwig van Beethoven. The book averages five-star reviews on Amazon.

Author R.K. Slade proves he knows the logistics and lifestyle of marching band with eight years of experience marching in high school and college. He majored in music theory and composition, which gives him credibility in writing about the complex music history involved in the story.

Though the book is advertised as being about marching band, most of the plot takes place in 1801 Vienna. The story progresses to encompass Rigby’s emotional development and slowly introduces the villain, then leaves room for the plot to continue into the second installment that will be released later. The marching band only makes an appearance in the beginning and ending parts of the book, but it serves as a driving force behind Rigby’s adventures.

Drum major auditions, mentioned in the beginning of the book and taking place at the very end, provides the characters in the story with motivation and creates tension between them. Although the actual audition process has some minor inconsistencies, the event adds another layer of emotion to the story and provides validation for readers who may find themselves in similar situations as audition season starts to heat up in the spring.

R.K. Slade also runs the “Marching Band is Awesome” social media spaces and merchandise lines. He uses the first part of the book to not-so-subtly promote products and the online platforms. This may irritate some readers and distract from the point of the book, but the “Marching Band is Awesome” line exists as a prominent aspect of many band members’ lives and the mention of it in “Because” simply connects the story more directly to the real world.

Especially in the beginning and ending, the book is littered with marching band inside jokes and themes. The running joke of “one more time!” holds true with any marching ensemble at any level or geographical location, including such universal themes makes the book relatable to any and all “band geeks” who read it. It connects the national band community with the entertaining story while educating them about aspects of music history.

Should you read it?: Yes.

Marching bands get very little representation in mainstream media, and in whatever appearances it does make, it is often portrayed in some kind of false light. Films and TV shows often use high school marching bands as the butt of jokes, perpetuating the stereotype of “nerdy” members. In media that focuses on marching bands as the premise, such as the movie “Drumline,” the activity is portrayed as hyper-competitive and bitterly elitist. “Because” transcends these predetermined boxes by depicting marching band in an accurate light, written by someone who has experienced the activity firsthand.

Most of the reviews on Amazon contain the enthusiastic applause of marching band members across the country, praising the author for creating work that portrayed marching bands in a way that both the community and the general public could relate to. Generally, the book succeeded in accomplishing its goal of uniting the nationwide marching band community and pushing the activity into a more positive and accurate light.

Collegian reporter Mckenzie Moore can be reached at entertainment@collegian.com or on Twitter @mkenziemoore172.