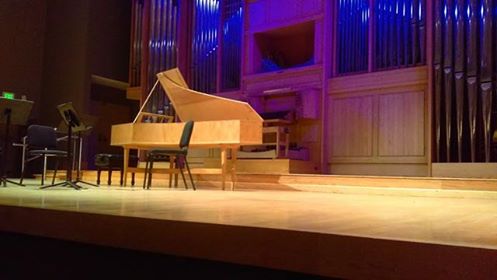 The atmosphere and presentation was professional, but also casual. The crowd consisted of mostly CSU students, although there were a handful of Fort Collins community members present as well.

“Just knowing that these are the mentors and seeing how they can play their instruments and in musical groups like this is amazing,” said Tim Koski, a CSU graduate student.

The faculty performed four pieces at the concert. They were all recent 20th century classical pieces with 19 performers in total. Some songs had as few as four performers while the last piece had 12 performers. Each song showcased all performing parts and each instrument or voice held a strong influence on the piece.

“We’ve had such a great time putting together these pieces,” said Rebecca Phillips, conductor and director of CSU bands.

There were some faculty members in multiple performances such as oboist Andrew Jacobson and cellist Barbara Thiem, both were in three pieces. Flutist Michelle Stanley was impressively in every single piece.

The performers smiled as they packed up and the applause continued until they had fully left the stage. When they bowed at the end of each piece pride and gratitude were evident on their faces.

One stand-out piece was after intermission, the show started up again on a very dynamic, theatrical note.

Soprano vocalist Tiffany Blake energized the stage and sparkled as her silver necklace and heels reflected off the stage lights. There was a certain opera and theatrical quality, which was expected as Blake’s concentration is in opera and voice.

“Singing chamber music is one of my favorite things to do,” Blake said. “I just love the small chamber works.”

There was also a movement that started with her belting, which caused some audience members to immediately perk up.

The final piece called for a lot of parts; twelve to be exact. The vocalist sang in English a poem by Dylan Thomas as the music enhanced the theme of the song and provided a deep emotional element to the piece.

Concerts like this are important because they create a personal bond between students and professors.

“It’s not enough for us to teach in the practice room,” Blake said.”We have to craft and give them something to aspire to, to say, ‘that’s my teacher too.'”

“We get so used to hearing recordings that have been perfected through autotune,” Blake said. “The magic of live performance is something that’s important to me.”