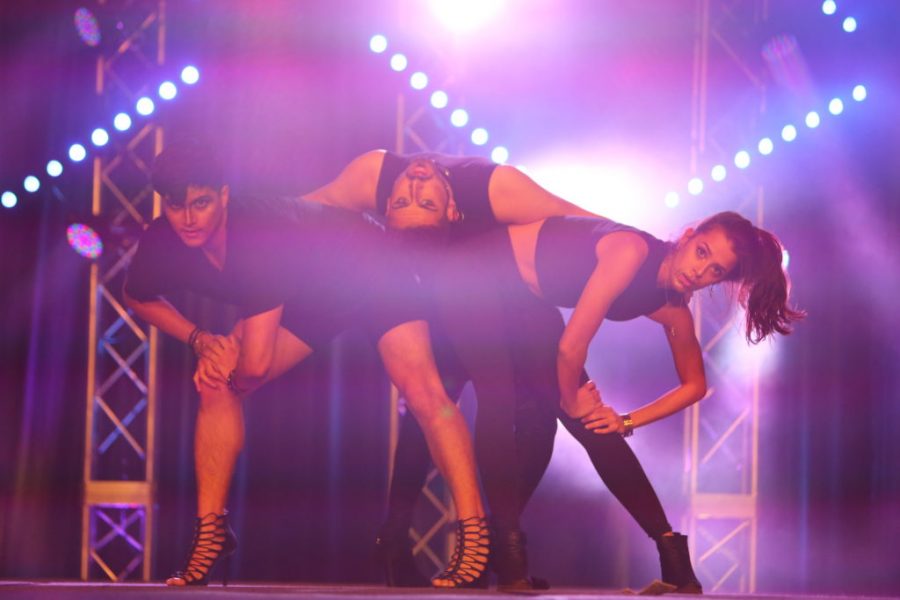 Wr3cked poses at the finale of their performance at the Galaxy Queers Drag Show hosted by PRISM. (Davis Bonner | Collegian)

The Galaxy Queers drag show could only be described as “out of this world” by co-chair Andy Auer.

The show, chaired by Auer and Delray Echohawk and hosted every semester by the student organization PRISM, featured student drag performers and professional drag performers in galactic getups Sunday evening.

The event drew a crowd of over a thousand and audience members raised over 1,400 dollars for the Pride Resource Center by throwing money on stage for performers they favored.

Both Auer and Echohawk have been involved with the drag show since their early years at Colorado State University, initially only attending the event their first year.

“The first time I came to a drag show freshman year (I) didn’t really know what to expect, what I was getting into,” Auer said. “What really struck me that first time, and has continued every drag show since without fail, is how kind of drawn into a community the entire experience tends to be.”

Echohawk said he was surprised that he enjoyed his first drag show because he had no prior experience with drag.

“I really didn’t know what drag was (and) I really kind of didn’t know what I was getting myself into,” Echohawk said. “I was never really much of an arts person. I was always more of a science (person) and into video games and stuff like that. I was really surprised at how much I enjoyed the drag show my first semester seeing it.”

Echohawk said the drag show builds a community not only for students, but for the performers.

“A lot of people I’ve performed with I hadn’t really known that well before our performance and I think this semester especially I didn’t know any of my other dancers,” Echohawk said. “It was really nice to be able to get to know these people who performed in the drag show before me and (in) other different ways. It kind of just keeps that community building aspect very well.”

The Galaxy Queers drag show marked the final show for Auer who will graduate in May. Auer said their final show would be bittersweet because of the work they have put in for it.

“It’s a little bittersweet,” Auer said. “It’s getting at (that) point in the semester where everything is really amping up both academically and (in) extracurriculars. I’ll be relieved when the show is done with, but at the same time everything is moving too fast and I don’t want it to be done with.”

Yasmin Sethna, a freshman theatre major, and Migle Prekeryte, a freshman biological science major, previously attended the Queerly Ever After drag show in the fall.

Sethna said she decided to attend this semester’s drag show because of the experience she had at the previous semester’s show.

“Last semester was the first drag show I’d ever been to, so seeing the different costumes and makeup and seeing how wonderful everyone performs was just a different experience for me,” Sethna said. “I loved that experience, so I wanted to experience it again.”

Prekeryte said she returned to this semester’s drag show because she feels connected to the performers because of her sexual orientation.

“I really feel like I associate with these people who are going out and showing themselves,” Prekeryte said. “Getting the word out about these shows and having so many people come and see them is really spreading the word (of) openness and acceptance. I feel like we really need to try to reach out to more people so people can feel more comfortable.

Auer and Echohawk said they are happy that many people continue to attend the drag show because they enjoyed those previous.

“(People say) ‘oh, the drag show! I went last semester (or) last year.’ ‘My roommate dragged me.’ ‘I went with my friend,’” Auer said. “It tends to be a really positive reaction with people really excited to go again, which is incredibly rewarding.”

Echohawk said the organizations that help sponsor the drag show enjoy being a part of the event and continue to help out.

“RamEvents loves doing it, the Residence Hall Association loves being a part of it and supporting us,” Echohawk said. “I believe last semester I was a little late in reaching out to (the police officers) and a couple of them reached out to me and said, ‘hey, when is this happening? I want to make sure that I’m off for that day and I can work it.’”

Auer and Echohawk consider the Galaxy Queers drag show to be the biggest drag show PRISM has ever hosted since Shangela Laquifa Wadley from seasons two and three of “RuPaul’s Drag Race” made an appearance.

Wadley spoke to the audience about the importance of self acceptance in between performing two songs for the crowd, her song “Werqin’ Girl” and a remix of Bruno Mars’ “Uptown Funk.” She then concluded the show with a medley of Beyoncé songs.

“(Life is) not just about the race,” Wadley said. “Life is about the marathon. It’s about … believing in yourself.”