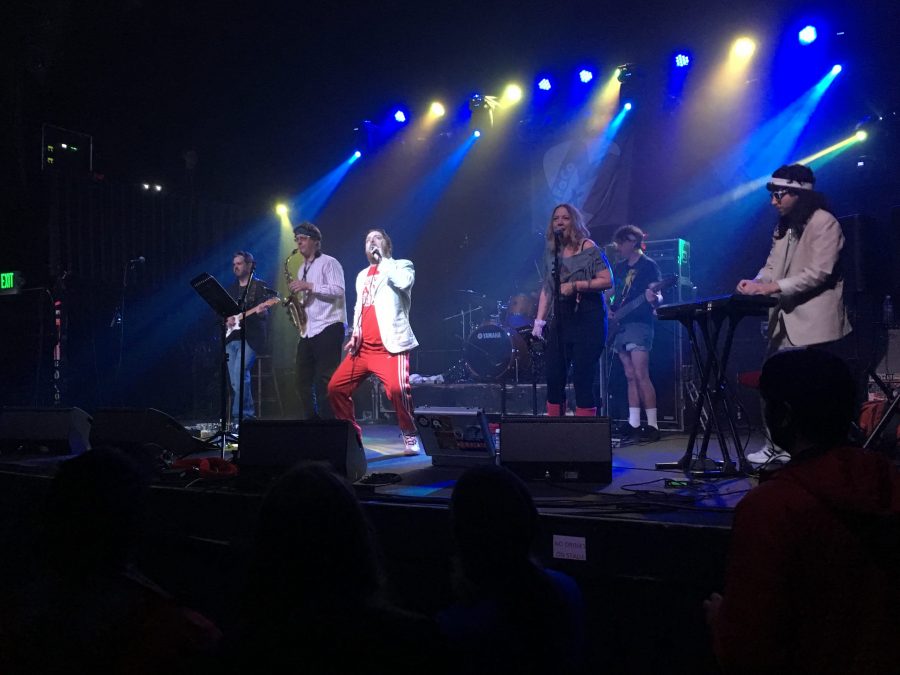 The Velvet Rope performed at the Aggie Theatre Friday for the first night of FoCoMX.

There is nothing quite like a local band. They are fun, they are genuine and they are able to connect with a crowd in a way that only a neighbor can. This is exactly what The Velvet Rope does.

The group, an `80s cover band, is comprised of six white 40-somethings jumping around on the stage, clearly having a blast. Their clothes are mismatched, but 100 percent 1980s, lending itself to the let-your-hair-down fun that can only come with a little-known group like this one.

Their lead singer, Johnny Velvet, is a bit cooky. A cross between Willie Nelson and Zach Galifianakis, he performs in a red tracksuit and a blazer until he rips his pants off, revealing cut-off jeans. Unfortunately, Velvet’s obvious drunkenness allowed him to forget song lyrics a handful of times and gyrate on his backup singer “Chakra Kahn.” As if that were not enough, he peppered his performance with jokes about a recent stint in the slammer. All in all, Velvet is an odd dude.

The rest of the band was fantastic. A man nicknamed Ivory Finger Blasts played the keys and brought an early `80s funk to the songs that just are not in the originals, bringing The Velvet Rope stamp to the numbers they performed. Another standout was Stu, the saxophonist, who added stellar riffs reminiscent of the “Full House” theme song.

The band did not perform many songs, but they played the bejesus out of the ones they did. They kicked off the night with Prince’s “Let’s Go Crazy,” showing off their guitarist’s skills and their ability to rile up the crowd. They moved on to the MJ hit, “The Way You Make Me Feel,” and “Nothing’s Gonna Stop Us Now” from the movie “Mannequin.” This song allowed Chakra Kahn to belt it out, proving she just may be the most talented member of the band.

Next came “Centerfold” by the J. Geils Band, which had the crowd jumping and singing as if it were the latest and greatest pop jam on the radio. Duran Duran’s “Rio” came next and was followed by Tina Turner’s “What’s Love Got To Do With It,” a duo of songs that proved just how dynamic this group is. The performance was wrapped up with George Michael’s “I Want Your Sex.”

The music was a blast and the Aggie is a great venue, but the best part of the night was looking out into the crowd and seeing close to a hundred glasses-wearing, balding and obviously a-bit-too-drunk parents reliving their glory days. One particular gentleman near the front was even sporting a hearing aid and not once did he or his wife, who made a point of hugging Chakra Kahn during the performance, let that get in the way of their amazing night.

If that alone does not encapsulate the fact that The Velvet Rope is a good freakin’ time, there is not much that will.

Nate Day can be reached at entertainment@collegian.com or on Twitter @NateMDay