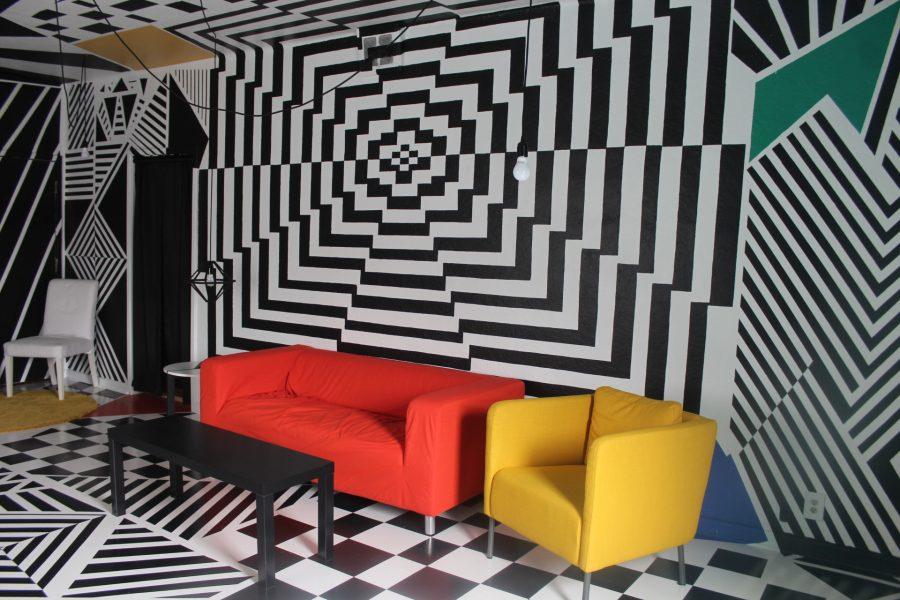 The Dazzle Room is one of the two new lounges at the Downtown Artery. Photo credit: Christian Johnson

Beyond stairs, art studios, a gallery and a door fixed with the golden lettering “Z/A” lie two secret rooms at the Downtown Artery.

The rooms, designed by the Downtown Artery’s Assistant Director and Director of Operations Lindee Zimmer and Amy Bradley, will function as experiential art pieces and a destination for wine tastings, dance parties and special events.

Behind the door and the Z/A, which stands for Zimmer and Amy, the atmosphere changes completely from the white-walled hallway outside. Hand-painted designs of golden leaves spread over the dark green walls of a bedroom-sized room. The dim lighting also illuminates golden branches specked with gems, reaching out from the corners. They combine with black wires that extend from the center of the ceiling to hanging lamps around the room, some of which sit over sets of high tables and chairs. There is also wooden bar.

This is the Fairy Cave.

“It’s very magical feeling,” Zimmer said. “It’s very calming. It has elements of nature in it. It has things fairys would be attracted to, gems, gold, branches.”

To the right of the doorway there is also a wardrobe with a full mirror covering its door. The door opens and through the wardrobe and black curtains lies the next room.

Black and white lines, shapes and designs lawlessly cover the walls, floor and ceiling. The puzzle of checker boards and what look like optical illusions are angled, sharp, jagged and stimulating. There is some sparse color. An occasional blue, yellow or green shape fits into the puzzle and few colored couches and chairs line some of the walls. As in the other room, black wires extend from the center of the ceiling to lamps. These ones are encased in black diamond structures and some hang over circular tables next to the couches and chairs.

This is the Dazzle Room.

“This one is ostentatious,” Zimmer said. “It might make some people stressed. To me it’s not (stressful) at all.”

The Dazzle Room is named after military ships that used dazzle camouflage Zimmer said, which were popular in Britain during World War I. The ships were painted with jagged and chaotic designs that made it difficult to discern their configurations from a distance. Some dazzle ships looked similar to Zimmer and Bradley’s Dazzle Room.

Zimmer said she and Bradley wanted to contrast the rooms so they would offer different experiences and different atmospheres. Zimmer said some people might prefer one room over the other. The Fairy Cave is more organic, according to Zimmer, and she wanted the M.C. Escher-inspired Dazzle Room to provide a full immersing experience.

The Downtown Artery is launching a monthly membership option soon in addition to their annual membership option, according to Zimmer, which along with discounts includes member’s only events. Many of those events will take place in these Z/A Art Lounges.

“(These rooms are) really private,” Zimmer said. “We can be in here and not really be out in the open. They’re secretive and exclusive and people like that.”

Zimmer said that the Downtown Artery hosts events in their art gallery but that it is not as private and sometimes other visitors come through. She said that in addition to wine tastings, there may also be beer tastings as well as food pairings in the Z/A Art Lounges. The wine tastings will offer wines that are not available at other places in town, according to Zimmer. Along with other special events, the lounges can also be rented out for events such as birthday parties.