Bayside returns to Denver with Say Anything 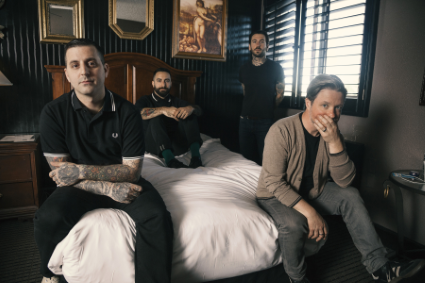 Alternative rock band Bayside will be at Summit Music Hall on May 2. Photo courtesy of Bayside

Alternative-rock band Bayside is coming back Summit Music Hall to play songs that spread across their extensive discography.

The band released their latest album “Vacancy” in August of last year. According to the press release, “Vacancy” is a personal reflection of singer and guitarist Anthony Raneri’s “coming to terms” with life after the loss of a relationship. The music still stays true to Bayside’s signature sound.

“Anthony is very specific to the song writing,” said Nick Ghanbarian, bassist of Bayside. “We’re seven records deep, so we know our sound. We find ways to push it without really changing our sound at all. We don’t feel like we need to change our sound to be creative.”

Ghanbarian’s initial influences were West Coast punk bands. Ultimately, punk bands from his hometown of Long Island, New York inspired him to pursue his life as a musician.

“When I was younger, Green Day was the reason I picked up bass,” Ghanbarian said. “Once I found my local scene and wanted to be in bands, I found more underground punk stuff like NOFX and Bad Religion. Closer to me was Bouncing Souls and local bands like Kill Your Idols and Silent Majority from Long Island that I got to see a bunch. I figured out then that this was what I wanted to do. I wanted to tour the country and tour the world playing shitty clubs.”

Bayside formed in 2000. Their first album “Sirens and Condolences” released in 2004. Ghanbarian joined the band shortly after.

“I joined a couple months after ‘Sirens and Condolences’ came out,” Ghanbarian said. “Anthony and I had a mutual friend and she asked if I could get Anthony a job between tours. I was working retail at Urban Outfitters at the time. Anthony and I hit it off. He went away on tour, came back, and said he needed a bass player. I gave it a whirl and never looked back.”

Bayside is currently co-headlining a tour with Say Anything. This is the first time Bayside and Say Anything have been on the road together.

“Of all the bands we’ve been associated with over the years, we’ve probably played with Say Anything the least,” Ghanbarian said. “We’ve played a couple random shows and festivals, but this is our first full tour. I’m surprised it hasn’t happened yet.”

Ghanbarian said Colorado feels like home to the band.

“It’s always been good for us and it feels like one of those special places that is like home as far as the reception goes,” Ghanbarian said. “People get super crazy and excited when we play and that’s what New York is like. There are only a handful of places like that in the world and Denver is one of them.”

Among those crazy Colorado fans is William Steadman. He has been listening to Bayside since the ancient days of Myspace.

“I’ve been listening to them for 10 years,” Steadman said. “I fell in love with ‘The Walking Wounded’ when I heard it on my friend’s Myspace page in middle school.”

Steadman said Bayside keeps a personal connection with their fans.

“My first Bayside show was in 2010 at Summit Music Hall,” Steadman said. “I’ll always remember how powerful that concert was and how close they were to the Colorado crowd. Anthony loves us. I felt like a little kid when he added me on Snapchat. That was a religious experience for me. I’ve been to two other shows since then and they never failed to disappoint.”

Bayside is playing Tuesday, May 2 at Summit Music Hall with Say Anything and Reggie and the Full Effect. The show starts at 6:30 p.m.