The last time we heard a record from The Mavericks it was not nearly as successful as they might have hoped it would be. “Mono” reminded us why we fell in love with the band in the `90s but did not quite bring enough new elements to keep it fresh. “Mono” was a record that tried too hard to cling to the past. That did not deter The Mavericks however, because they are back and are looking towards the future with “Brand New Day” 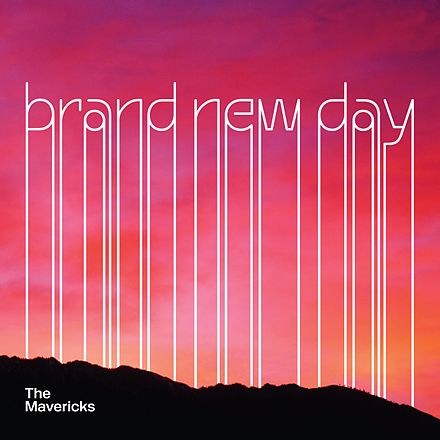 The Mavericks have a career spanning throughout the `90s and most the early 2000s. They would go on to take a hiatus in 2004 before returning in 2012. They have had no trouble landing their records at the top of country charts, with most of them even charting in the Top 10 of those same charts. That is no easy feat by any means. It may be due to how unique and influential the band has been in their career. It is hard to narrow them down to just one specific genre however, as they are a good mix of more modern swing, pop, neo-country and Americana. They have never had much trouble sticking out with their music and the only competition they have is with themselves. Trying to always be better musicians and that is exactly what they are going for with “Brand New Day.”
“Brand New Day” is a 10-track record that clocks in at around 39 minutes in length. From front to back it is everything that we would expect The Mavericks’ record to be. From huge layered tracks that are easy to dance along to, to slower and emotional ballads that tug on the heart strings. Everything about “Brand New Day” is what you want a record when you have a career nearly as long The Mavericks. This record feels like it is belonging up there with some of their better ones from the `90s, but it is so well produced that it is hard to deny this fresher sounding record belongs in the 21st century.

Musically, “Brand New Day” is not that different from “Mono” on a structural level. Execution wise, there is just a whole new energy about. Right off the bat, you are treated to “Rolling Along,” which is a much rounder track and not nearly as over the top as some of their previous songs from their past couple of records. You can hear just how much their Latin roots are influencing the tracks with the number of instruments layered into everything. Plus, with tracks like “Easy as It Seem” and “Ride With Me” it is hard not to enjoy their unique sound and have some fun listening along to it. Rhythms are catchy, melodies are memorable and best of all it is different. The Mavericks have always been at the forefront of their genre, and that is abundantly clear with “Brand New Day”
Lyrically, The Mavericks songs are more like a fine wine, better with age. That could not be any clearer with “Brand New Day.” Frontman Raul Malo’s voice has not changed throughout the years, but his songwriting sure has. Tracks like “I Think Of You” and “I Will Be Yours” are the emotional ballads that are as deep as they are meaningful. There are not any surface level tracks when it comes to this record. Plus, the soothing delivery of Malo’s vocals just reminds you of a simpler time. Tracks like “Damned (If You Do” and “Goodnight Waltz” are some of the standout tracks because of the delivery of the vocals. While not every song is a standout in their own regards, it is hard to deny that this is one strong record overall.

Should you listen to it ?: Yes!

Collegian reporter Alec Erickson can be reached at entertainment@collegian.com and on Twitter @CTV_Ace.