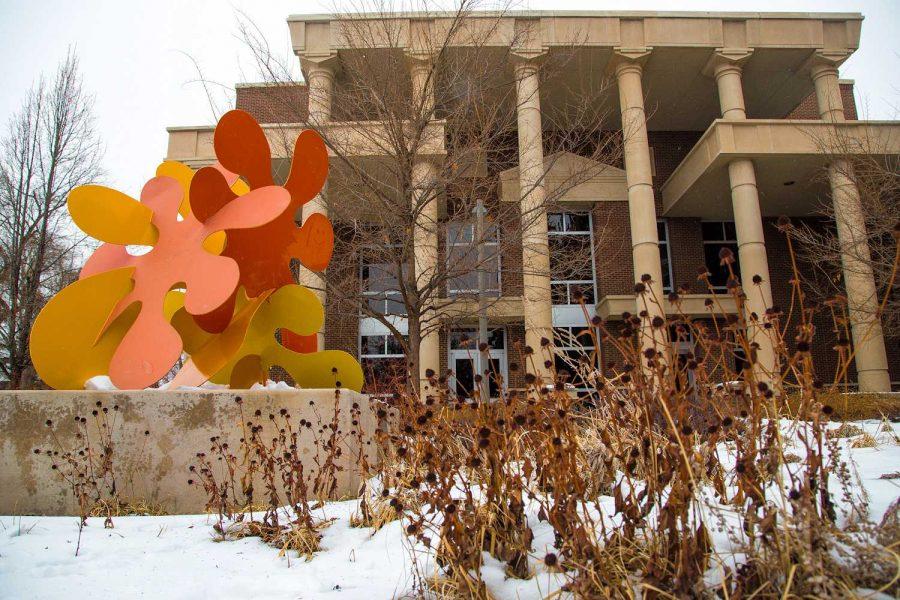 The sculpture "Steel Splat" by Doris Laughton sits in front of the University Center for the Arts. With the recent removal of the Soup Can sculpture from the UCA, the building will be adding new art instalations throughout.

Three Concerto Competition finalists competed against each other March 7, each playing a unique solo with the CSU Sinfonia. Frangel López Ceseña on violin, Joe Jones on marimba and Julius Hochmuth on cello introduced three concertos to the audience from a diverse range of composers. After the finals, the CSU Sinfonia treated Griffin Concert Hall to a Mozart Symphony while waiting for results.

Jones came in third in the competition, Hochmuth placed second, and López-Ceseña ultimately swept the first-place title with his unique and technically challenging performance.

The competition began with “Sugaria” by Eric Sammut featuring Jones on marimba. With a complex and lively solo in front of softer counter-melodies in the chamber orchestra, Jones effortlessly flew through multi-octave runs. The piece, in three unnamed movements, bookended a more mellow piece featuring the marimba without accompaniment for the first measures.

“One of the challenges of this performance was balancing the orchestra with marimba,” said Director Wes Kenney. “It’s more of a subtle instrument, and we had to work on finding the right volume for each instrument to really make it stand out.”

López-Ceseña on violin took the stage for the second segment of the concert playing “Fratres” by Arvo Pärt. The minimalistic piece featured discordant notes and rapid temp changes. It created a strange and mystic mood as it developed a particular melody line and returned to its main theme throughout the piece.

“Very few people know the composer of the piece,” López-Ceseña said. “The best part of this experience was being able to bring that music to the public because most of them have probably never heard it before.”

As the final competitor of the night, Hochmuth presented “Cello Concerto no. 1 in Eb op. 107” by Dmitri Shostakovich. The three-movement piece featured a complex melody in the cello solo. Dynamic contrast increased intensity throughout the performance and counter-melodies in the chamber orchestra created an ominous mood in the minor key.

“Shostakovich is such difficult music, especially for woodwinds and soloists,” Kenney said. “The students wanted to take on the challenge and it really made the experience great.”

While judges discussed placement, the CSU Sinfonia played “Symphony no. 40 in G minor K. 550” by Wolfgang Amadeus Mozart, a familiar four-movement performance. The lively theme varied its tempo throughout the first movement, then drifted into a waltz-sounding second movement with a heavy woodwind feature. An articulated and brief third movement gave way to the final piece of the night, “Allegro assai.” The movement used opposing dynamics to return to varying themes and created a light timbre with diverse instrumentation.

“I love any work of (Mozart’s) in a minor key,” Kenney said in a press release regarding the famous piece.

“This was my first time performing as a soloist in the United States, which makes tonight very unique,” López-Ceseña said.

According to the concert’s program notes, López-Ceseña was born in La Paz, Baja California Sur, Mexico. He has performed in Mexico, Italy, Germany and France, and he currently holds the position of concertmaster in the CSU Symphony Orchestra.

“For a lot of the soloists, it’s their first time performing with orchestra accompaniment and in front of a crowd,” Kennedy said. “It’s always interesting every year to see how they develop.”

The crowd gave the soloists and the CSU Sinfonia a standing ovation at the end of the night as the finalists embraced on stage and congratulated each other. Performing the concert gave each of the Concerto Competition finalists an opportunity to refine their skills and gain new experiences in their music careers.

Collegian reporter Mckenzie Moore can be reached at entertainment@collegian.com or on Twitter @mkenziemoore172.