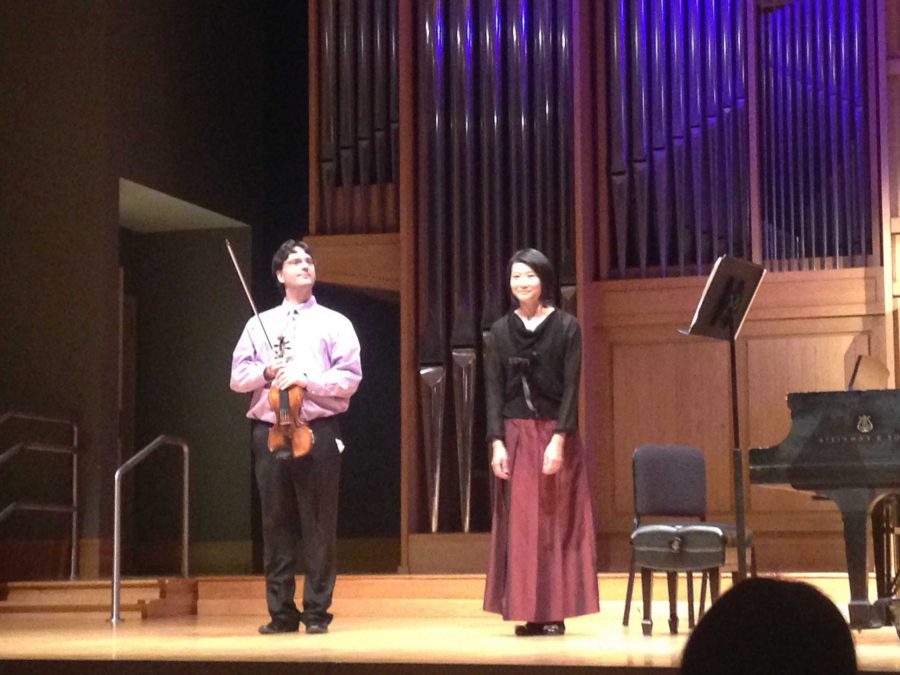 Two talented musicians came together for a presentation at the University Center for the Arts. Despite the cold and icy weather, many CSU students and Fort Collins community members made the journey to the Organ Recital Hall to watch the concert. Gregory Maytan, violin, and Chi-Chen Wu, piano, continued their ongoing Beethoven sonata project with three selections that showcased each musician’s skills.

The first piece, “Sonata Op. 12 No. 1” in three movements, Allegro con brio, Tema con variazoni: andante con moto, and Rondo: Allegro, began with a lively first movement that featured arpeggios in the piano and sustained notes from the violin.

As it switched between major and minor keys, the music grew louder and more intense, as Beethoven’s compositions tend to be. A call-and-response ensued and emphasized the main theme of the sonata, which transitioned into the second movement. Both instruments featured sets of runs and soaring high notes at forte. The movement presented an ominous mood before settling down into the lower octaves, eventually calming to a soft concluding note. The third movement began with a driving tempo from the piano and cheerfully high notes from the violin. Light articulation from both instruments decorated a jumping melody that faded into delicate high notes. Maytan and Wu brought forth a crescendo at a perfectly-timed rate that increased in intensity for a vibrant melody.

The first movement began with a smooth counter-melody in the piano and a minor-key melody in the violin. The moods of the piece alternated between angry-sounding and joyful, driving the tempo in multiple directions. Brief piano features accompanied the complex melody in the violin and ended on a strong note. The slower second movement presented a primary violin feature with some discordant upbeats from the piano. The movement built and sustained the theme, closing with an expressive, long chord. Although short, the third movement returned a cheerful and staccato theme to the movement with shrill high notes and a quick tempo. To conclude the first half of the concert, the fourth movement brought Beethoven’s trademark intense dynamic contrast. Trills and plucking gave the movement a sense of lightness and ease before making way for a dramatically different tone: low, strained notes with a syncopated rhythm.

After a brief intermission, the concert resumed for one final presentation of Beethoven’s most influential works. “Sonata Op. 30 No. 2” in four movements, Allegro con brio, Adagio cantabile, Scherzo: Allegro, and Finale: Allegro; Presto, started as a minor-key, frantic-sounding syncopated call-and-response.

With quick and low piano notes driving the melody, the two musicians fell in and out of unison to create an emotionally-strained movement that eventually became a round. The movement ended as most Beethoven pieces do: with a loud, crashing concluding note. A key change led to a more peaceful second movement with repeated notes in the violin. The music would occasionally break for loud but short runs, then resume its quiet timbre. Maytan plucked his violin to create a delicate, soft sound that built up to the final ending chord. The third movement varied between light and playful melodies and violent, stabbing rhythms, ending abruptly on a minor chord. The final movement of the concert showcased fierce low notes that made way for acute major-key runs in both instruments, but eventually returned to a minor key and rapid, repeating notes.

With a high, resounding final note, Maytan raised his bow and Wu whipped her hands away from the keys, ending the concert with the type of loud slam of a chord that Beethoven would be proud of.