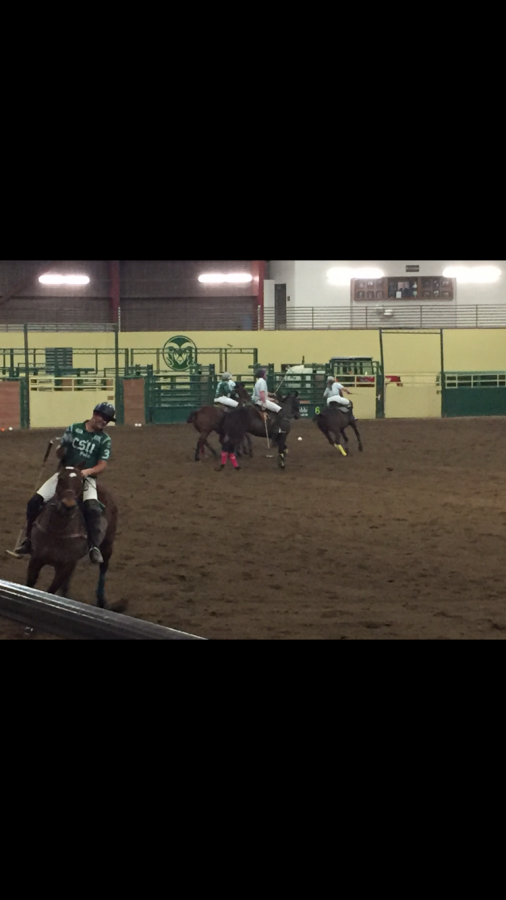 Most students think about football or basketball games when imagining college sporting events, but Colorado State University has one powerful team on horseback  that is bringing heat to the arena. The CSU Polo Club includes a men’s and women’s varsity team and both are members of the USPA or United States Polo Association intercollegiate division. The men’s team took the national title in April 2015 and both teams are looking for another competitive season.

The game works like this: teams of three, mounted on horses, use bamboo mallets to attempt to hit a ball into the opposing team’s goal. One player on the team, Raenne Magill, says that polo is different from any other organized sport. The most important rule of the game is that players cannot pass the line of the ball. This is important as it helps to keep the horses safe from swinging mallets. Some game rules can be rather abstract and difficult to follow, according to Magill, while others are fairly straight forward. For instance players must use their right hand to swing the mallet, but can swing on either side of the horse. A game is divided up into “chuckers,” which are similar to quarters in basketball. Collegiate games usually have four, but arena polo can have up to eight chuckers, each lasting about seven and a half minutes. Polo is a full body contact sport. Just as rough and rigorous as games like hockey, riders can bump and ride off so long as they are following basic rules, which helps to keep horses and riders safe.

Andrew Wildermuth, the captain of the men’s varsity team, says the game can get extremely competitive and aggressive at times.

Safety is important for both riders and horses. All players must wear a helmet, knee-high leather boots and knee pads. College teams are also required to wear either a face mask or safety goggles. Elbow pads and gloves are optional. Horses are outfitted with polo wraps and splint boots on their legs to prevent injury. Over-girths are straps wrapped over the top of the saddle to keep it fastened during the game. All gear, or “tack,” used either aids the rider in maintaining control or provides a safety feature to the rider or the horse.

A lot of dedication and time goes into a successful team. Commitment begins with caring for a fleet of horses. There are around 15 horses used by the club; 12 are regularly used, with two backup horses and one ref horse. An ideal polo horse is selected for speed and agility. These four-legged athletes must be able to turn quickly and maintain energy throughout a long game.

During the off-season the horses are kept at another location, said Chris Chun, a third-year student and one of the horse managers. When the team gets them back for practices they must be exercised back into shape like any other athlete. The horse managers are responsible for establishing and following a week-by-week exercise schedule and creating nutrition plans and vet appointments for the horses. Two students are caretakers, meaning they must feed the horses every day and blanket them at night when it gets cold.

The team’s work does not stop at horse care. Mariel Bialy, the captain of the women’s varsity team, says she spends about 10 hours a week practicing.

“Time flies by when you’re with the horses,” Bialy says. Bialy is in her fourth year of competing for CSU and has been playing polo for nine years.

“Not everyone is as lucky as we are,” Magill said. The polo team at CSU was a major deciding factor for her when choosing a college.

Students can come watch and support these dedicated student athletes this week. The men’s team will be playing at home this Friday, Feb. 24 in the B.W. Pickett Arena at CSU’s equine center.