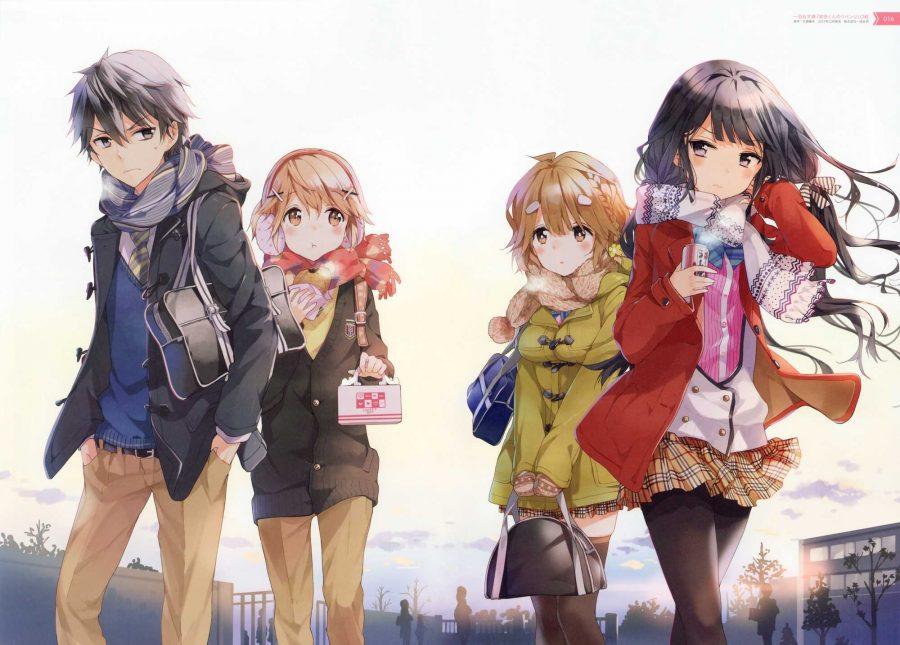 As the seasons change, we are given new anime to watch and some seasons are better than others… this rings true for the current season.

The current season of anime has an overabundance of moe shows — shows that focus on cutely drawn girls — and it also has a lack of quality action-packed shows. The previous season gave the audience Drifters, FlipFlappers, Yuri on Ice and other such gems that rounded out a wide variety of shows, however with the current season most of the talk is about Konosuba, Miss Kobayashi’s Dragon Maid, and Gabriel Dropout. These shows aren’t the only ones, though; excluding ACCA and The Saga of Tanya the Evil, this season is also giving us Masamune-kun’s Revenge, Fuuka, BanG Dream and Interviews with Monster Girls.

Every show in the moe genre focuses on cute female characters, and while the genre is good and can be fun to watch, the overabundance in a season makes the season weaker. The genre is similar to the MCU. When you’re watching Marvel films, you know what you’re paying for because most of the time the franchise focuses on a familiar plot — just with new jokes and characters. The same could be said for these shows.

Common themes presented in each show include the romantic comedy genre with Interviews with Monster Girls, Miss Kobayashi’s Dragon Maid, Fuuka, Masamune-kun’s Revenge, and Seiren. All of these shows focus on the main character and a girl they like. In Fuuka, Masamune, Interviews with Monster Girls and Seiren the audience gets the usual formula of the main girl disliking the protagonist but over time they fall for each other, a trope very common in romantic comedies. Kobayashi is the only odd one out because they try and make it unique by making the protagonist a working class woman who takes in a dragon who has fallen in love with her. All of these stories, regardless, are focused on our heroes getting the other person, unless Kobayashi throws a curve ball, which could happen, since the source material is still being written. The other four, however, all have the same thing going for them, each with a slightly unique angle.

Another issue with the shows this season is the variance of comedy, with most humorous shows being the romantic comedy genre and having cute girls in them, such as Gabriel Dropout with their repeat use of the dog stealing Satanichia’s melon bread, even in random places. We also have Gabriel being lazy all the time after she used to be an outstanding student in heaven. The show was made with some of the same people who worked on Himouto Umaru-chan, a show which also made use of repeated jokes, but the way that Gabriel Dropout handles their humor is not as unique and clever as the other offerings.

Fuuka’s humor stems from the relationship between the protagonist, Fuuka, and others in their lives. An example is the request to get Fuuka to join the track team repeatedly, where they have the protagonist misinterpret what’s going on. The humor always seems to stem from misunderstanding and awkward or surprising moments for the main characters, but adds very little to the overall show. The most redeeming aspect of the show comes solely from the great animation and cute character designs, and some of the music in the show is very pleasing to the ear as well. Fuuka’s even had minor promotion by Fairy Tail author Hiro Mashima, who had drawn his interpretation of Fuuka and posted them on his Twitter account around the time the show first aired. The show overall isn’t terrible, but the humor and lack of originality caters only to fans of the romantic comedy genre and some art fans as well due to the great animation.

Interviews with Monster Girl’s is an adaptation that adds to the monster girl genre that has obtained more publicity over time with shows like Monster Musume, where we have a protagonist surrounded by a lot of attractive monster girls who are forced to live with the protagonist. In Interviews, however, there is a different approach that is enjoyable, where the protagonist uses his job as a teacher to write his college paper on monster girls. There are only four types of monster girls according to the show, and each type currently resides in the school, so the teacher is able to find time to interview the girls and get closer to them as he begins to understand how they are. The girls in return enjoy having someone take the time to talk to them as each girl is unique in some way and he helps them with their school problems. Characters such as Machi the Dullahan, who has difficulties due to carrying her head around, loves it when the protagonist takes her head on a date, something she dreamed about doing with a guy. With the unique take however, the jokes in the show sometimes are created by the girls unique conditions and other times it’s their personalities, which are things seen in romantic comedy genres and Monster Musume as well. With the lack of unique jokes, the show suffers from being unoriginal at times.

Masamune-kun’s biggest drawback is the fact that while it is unique to watch a character pursue a girl to break up with her in a romantic comedy setting… the story doesn’t get more original than that. That isn’t to say that even their uniqueness is completely original, however it is rarely done and they do masterfully pull it off in a way to ensure that Masamune isn’t a completely unrelatable character taht has nothing going for him, except an arrogant and self interested personality. The show gives him more depth by giving us Disney channel-like parents who make the children look normal, and Nisekoi like women who remind me of Tsugumi, Marika and Chitoge. Masamune wants to have Aki fall in love with him and then break her heart, but we see early on that he starts to fall for her, after all she fits the trope of a tsundere, since she acts distant and cold but has a soft side underneath.

Other than the characters and tropes being similar to other shows, Masmune’s humor stems from miscommunication, as does most romantic comedy anime, and the show uses Masamune’s “Master” and the plans he creates to add to the humor. When Masamune thinks Aki found out about his plan, we get a shock and laugh when we see him fall into a rope trap and find out that he’s going to be getting helped by those close to Aki. We also get humor from a breeze rolling in and finding out that the new romantic rival is similar to Marika from Nisekoi, because she is unabashed by having things happen to her that might embarrass others. The personalities, as with most romantic comedies, are something that this show uses to try and make itself better, but it eventually gets to a point when romantic comedy shows with cute characters have to be unique enough in some way to maintain the audience.

Each show this season is unique with the few non-moe non-comedic shows out there, the season is lacking as opposed to the previous season. Whether or not that is because of the shows that had been suggested to animation studios was mostly romantic comedies or it is a common trait in the world of anime, the decision to air all of these shows at the same time was a mistake for studios. There is an over abundance of moe and romantic comedy shows with sub-par plots, and the uniqueness of each show varies so much that very few should be maintaining a strong following in the states because if viewers have seen enough shows, they begin to see common tropes rehashed and most of the good shows to keep watching become the prequels, sequels and continuing shows from the previous season. Each show may have some minor reasons to continue watching them but there is only one new show this season that stands out, compared to the others — Miss Kobayashi’s Dragon Maid.

In the show, we get repeated uses of Toohru trying to get Kobayashi to eat her tail, because dragon tails are delicious. We also get a lot of moments of extreme violence when Toohru stops a street mugger or when the dragons play dodge ball, and by the end the park looks like it was leveled. Another great use of repeated humor stems from the cute younger dragon, Kanna, who passes for a grade schooler. We see Kanna as she wants to go to class and find out she’s too smart for her grade. Kanna also gives a lot of cute moments when Kobayashi trains her like a dog by throwing treats or Kanna tries to find the best place to nap only to end up on Toohru’s lap. Other dragons as well have provided repeated humor in the show and given the unique flare that other shows need if they’re wanting to be a refreshing feeling romantic comedy. When Kanna and Toohru spy on Kobayashi and she spots them through the clouds, or when Kanna teaches a class to say wicked all the time, it adds to the cute and lightheartedness of the show. If you see any show this season, this is the best show from a comedic standpoint and originality in the romantic comedy genre.

As far as the repeat shows, Konosuba remained true to the first iteration, and the shows that carried over from the previous season (March Comes Like a Lion, Nanbaka, All Out) have all held their own and remained consistent with the same quality they had when they aired.