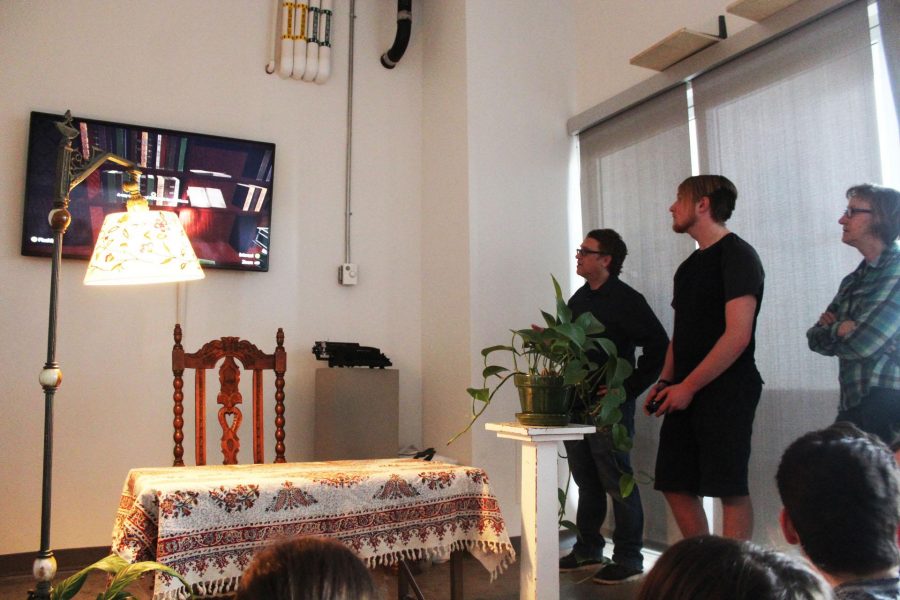 Professor Michael Salmond from Florida Gulf Coast University is making art in an unexpected place: video games. Salmond works in electronic arts and interactive design. His recent research takes the form of the game “The Diaries of Professor Ansell: Deceased.”

The game is based on H.P. Lovecraft’s short story “The Call of Cthulhu” and is currently on display and open for play at Colorado State University. The game puts players directly into Lovecraft’s narrative

“The idea is you’re the nephew, your uncle has died under slightly mysterious circumstances and you’ve got to go to his house,” Salmond said. “You’re going to take up his affairs and in going through his notes and his writings you start to understand he’s got involved in this cult, this Cthulhu worship and you don’t know anything about it. You’re exploring the house in different levels and it kind of reveals more about what Cthulhu is about and what the whole thing is about.”

While the game is great it leaves many wondering, is it really art?

“Electronic art can be a lot of things,” said Cyane Tornatzky, a professor in the electronic arts department at CSU. “It can be video art, it can be net art, it can be using the computer to process drawings and images so that they have a different look and feel.”

“What Michael’s done is he’s translated a text into this interactive space,” Tornatzky said. “So the artistry is that all of a sudden he took this 2-Dimensional text, his imagination and interpretation of the text and then translated it into a video game.”

“We’re very used to adaptations of books into film or books into television. It’s pretty rare to have books adapted into video games,” Salmond said. “That’s kind of my thing. It’s literally like a book. There are experiential games so you go through and you experience it.”

Tornatzky explained that new media, such as electronic art and video game art, is very focused on the interaction the viewer has with the art. It is much like performance art in that sense.

“So people have this different experience of art, they’re immersed in the art,” Tornatzky said. “We’re thinking about this when we make video games that are artwork. We’re doing it in a new way that is aesthetically beautiful, takes place over time and deals with greater concepts.”

Tornatzky also mentioned that her classes use some of the textbooks that Salmond has written and that her class was able to test out Salmond’s game before he gave his official talk to the public. The two hope to continue collaborating.

“Going forward Michael and I hope that our students will do an exchange and tie [our universities] more closely,” Tornatzky said.

The game will be up and running in the Electronic Arts Gallery in the Visual Arts building for about a month. It is open for anyone to play throughout the day. The only condition is that the game is a work in progress and Salmond wants feedback on any bugs.

“I want you to tell me where there’s doors you can’t get through, this doesn’t work, that doesn’t work, I fell through architecture. That sort of thing,” Salmond said. “This is how game development works.”