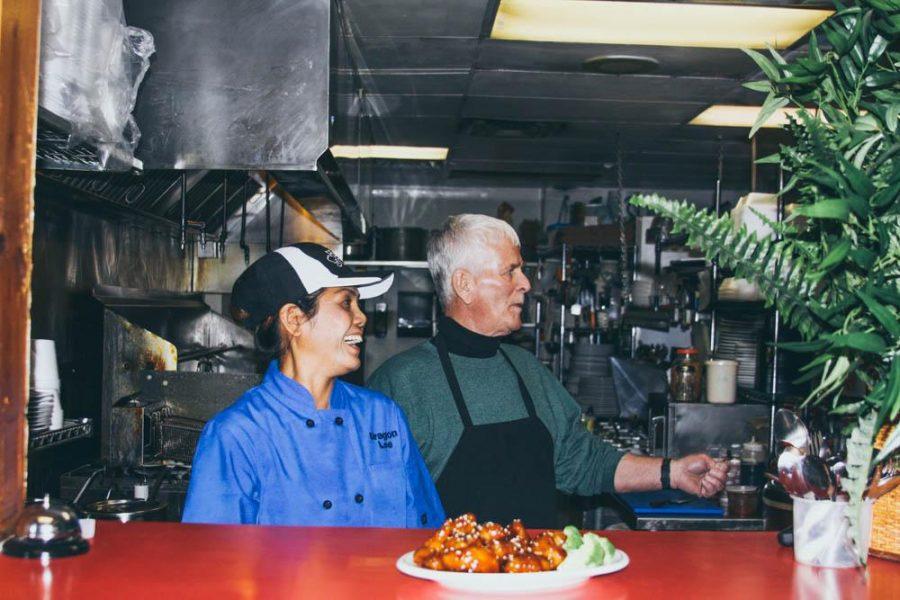 Wipa and Robert Miller own Dragon Lee on Elizabeth, which offers authentic dishes for modest prices.

Wipa happily obliges to my questions as we get down to what I’d like today. I’d already tried two of their lunch specials and today I had to try one of their noodle dishes: number 25, the stir-fried rice noodles, catches my eye. Wipa tells me it is like Pad Thai, that is exactly what I want to hear.

Wipa says I can adjust it in various heats, although it is not noted on the menu, so if they are busy you might have to ask. I go with the medium to be cautious. As Wipa gets the order started, she starts to tell me about the roots that provide a Pad Thai dish in a place self-described as a Chinese and noodle soup restaurant.

Born and raised in Taiwan, Wipa, did not move to the U.S. until she met and married her husband, Robert, eight years ago. A cook for most of her life in Taiwan and Bangkok as well, these are all Wipa’s own recipes so it is probably one of the most authentic tastes in Fort Collins.

Robert comes in, carrying supplies from the market it looks like. A small family operation, the Miller’s get many of their ingredients from nearby markets and must do so often as “almost none of our food is here for more than 48 hours,” Robert said. That freshness translates to the food.

The first two times I visited the Dragon Lee I got the Almond and Cashew chicken lunch special. One of several delicious deals for $7.99 everyday from 11 a.m. to 3 p.m., you will get a fairly large entree, an egg roll, a bowl’s worth of rice and a choice of soup. As someone who eats like he is much larger than he is, if it fills me it will fill you.

The first thing I noticed about my meals were the quality of meat, something that is questionable at a lot of Chinese restaurants. There is no mystery to this meat, no shocking paleness, no knotty pieces, I was so high on the chicken that I elected to try the Beef Broccoli next time. In one visit the Dragon Lee convinced me to try a dish I usually stray away from.

The vegetables do not fail in comparison to the meat either. The broccoli was crisp, but cooked to tenderness. The vegetables in the Almond and Cashew chicken were delicious as well, the bell peppers had a strong bell pepper taste, rather than a bland and water-filled mass. The vegetable cuts tend to be a bit large however, but that can be asked away.

That is what Robert thinks is one of the things that makes the Dragon Lee special, everything is made to order and he says they are happy to make whatever adjustments a person may want. So they will cater your vegetables to you.

Another thing that impressed me about my meal was that although “fried” falls in the description of many dishes, nothing I have been served was heavy on grease. It is honestly not what I was expecting the first time I went in. It is not cheap greasy food, as much as that is delicious at times, it is good quality food at a fair price.

They hit their goal on the head. “We appreciate anybody that comes in,” Robert said. “We just want to give people good food at a fair price.”

I cannot stress enough how much I almost always feel the need to order more than an entrée wherever I am at, for fear of not ordering enough. The Dragon Lee puts those fears to rest for as little as $7.99 most days. Pho runs for $6.99 or $8.99, and while I go large by rule of thumb; I am confident the small is a meal.

While Wipa’s food is the shining star of the Dragon Lee, you can see Robert’s influence in the much of the restaurant. Firstly, he is the man at the counter, so you cannot miss him if you visit. He is very much an old school red-blooded American. Raised in Denver, Robert served in the military for 32 years before retiring and eventually meeting Wipa on a trip to Thailand.

Should you eat there?: Yes.

In the simplest of terms, much like I imagine Robert has in his life as a military man, the Dragon Lee concerns itself with keeping the status quo while also doing what some others would not. There are not many frills to the place, maybe not enough honestly, as I think there is the possibility of the Dragon Lee may lose out on heavier pockets. Seeing the outside of the restaurant, it appears just average when it really goes above that.

That being said, the place is clean and the food is fresh, which is everything I do not expect when I think of the generic Chinese restaurant. The Dragon Lee is every bit worth the money and will take you by surprise.