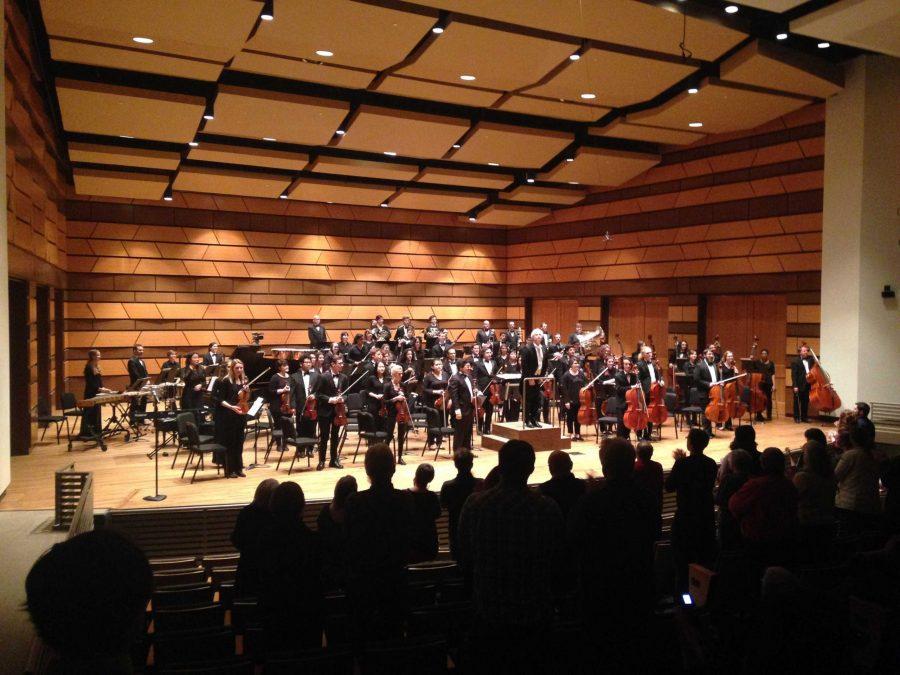 On Feb. 8, the University Center for the Arts welcomed Colorado State University students and community members into Griffin Concert Hall for the first large-ensemble performance of the semester: the University Symphony Orchestra’s presentation of Shostakovich Returns, conducted by Wes Kenney.

The performance began with the 1936 Suite provencale, op. 152d by Darius Milhaud in eight movements. The opening movement, Anime, kicked off the concert with a joyous and majestic theme. After a slow, gentle minor key in Tres modere – Vif, the orchestra returned with a full and round tone to bring the syncopated melody of Modere to life. Vif (IV) returned a slow tempo to the suite before Modere (V) showcased woodwind features and stylistic contrast to develop the piece. Vif (VI) built tension with strained high notes and ominous, pulsing lower notes in the strings. Lent and Vif (VIII) presented piccolo features, a light and playful melody, and smooth timbre to finish off the first piece.

Special guest John Carlo Pierce, tenor, joined the University Symphony Orchestra for the next three movements. The Creation, Hob. XXI:2 by Franz Joseph Hayden, began with an aria from Pierce while the condensed orchestra behind him accompanied with counter-melodies and smooth harmonization.

Saul, HWV 53 by George Frederick Handel began the fourth piece with a cheerful vocal melody, echoed by the orchestra between stanzas. The piece developed into a more melancholy, slower-paced minor key before resuming the original theme. Pierce flew through a final upbeat stanza before concluding his feature with the orchestra.

After a short intermission, the University Symphony Orchestra returned for the premier performance of the evening: Symphony no. 1 in F Minor, Op. 10 by Dmitri Shostakovich. He wrote the piece at eighteen years old upon graduating from the Leningrad Conservatory, proving his genius began early in his life. The first movement, Allegretto, began with a multitude of individual instrument solos, including trumpet, clarinet, flute and violin. The “impish” piece held a steady tempo, growing in intensity until the percussion led the group through a loud climax, back down in volume, and finally concluding with a soft return to the original theme. Allegro presented a quick tempo with sustained notes in the strings. Dynamic contrast built tension throughout the movement until, similar to the opening movement, it ended on a quiet tone.

The third movement, Lento, showcased a slower moment in the concert. Shrill high notes and occasional discord led up to an enormous close to the movement: high trills, descending arpeggios and fierce percussion. The final movement began with a timpani solo. The piece became brighter and presented a major key paired with an upbeat, lively tempo. Resolving chords concluded previous discord while the group continued to grow in volume. With one final chord, the movement ended abruptly and left the concert hall with an echo of Shostakovich’s First Symphony.