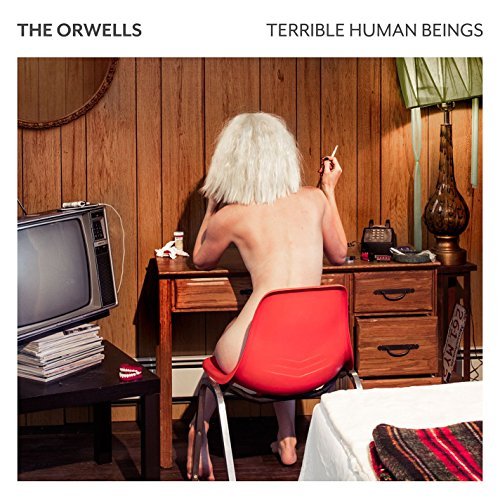 The title of this album may not be an apt descriptor of the musicians behind it. It takes a lot to release three albums in just five years. However that is exactly what The Orwells have done. Notably they have gained a lot of attention when they toured with Arctic Monkeys back in 2014. They are worthy of their own spotlight now and their third studio album “Terrible Human Beings” proves that.

Based out of Elmhurst, Illionis, a suburb of Chicago, The Orwells got their start back in 2009. They have been hard at work making a name for themselves in the eight years since. They released their first studio album “Remember When” back in 2012. It was not until the release of their second studio album “Disgraceland” in 2014 that the band’s music really started to hit the mainstream, with tracks starting to be used in commercials and even featured in the video game “Grand Theft Auto V.” The band started to really find their footing in recent years and it was only a matter of time until they put out another album. Sure enough just three short years later we finally have “Terrible Human Beings.”

“Terrible Human Beings” is a 13-track record that clocks in at around 39 minutes in length. Front to back it is everything you could expect from a punk rock record. The best way to describe the sound of this record is that it is a blend of modern day rock with some garage rock revival. That being said the tracks are pretty well mixed and the vocals are clean. The Orwells throw a few curveballs here and there with some tempo shifts mid record, but for the most part this record is all about taking a risk and trying to recapture an old sound. It has its ups, but there are certainly a few downs that come with that risk.

Musically we hear a lot of late 80s and early 90s influence in this record. That is apparent from the get-go with the lead track “They Put a Body In the Bayou,” with a huge focus on the bass line and some pretty decent background vocals. This does not last long, however, and we get some cookie-cutter, formulaic tracks like “Creatures” and “Hippie Solider” that struggle to stand out in any particular way. Then you get tracks like “Black Francis” and “Ring Pop” that perfectly describe the sound that the band was going for. Yet these moments are so few and far between. Then there is the whole issue of the ending track, “Double Feature,” which is a whole seven-minute song that seemingly does not go anywhere. It seems more like a jam session rather than a proper outro to a decent record. It felt like there was just so much that it could have done and instead it was more of a disappointment.

Lyrically what is there to say? You get the notion that the band is going for something that is a bit witty, but it does not quite land and can feel awkward, especially when they are picking and choosing when the accent comes into play. You have tracks like “Vacation” that are trying to be more eye-opening, while “Buddy,” which is one of the best tracks on the album, is too short. The vocals are so clean, however, that it is pretty easy to sing along to and is not that hard to follow. The overall feeling you are left with though is that the band was going for a lot more than what you are left with, and in the end you have a handful of clichés that are not that bad.

Should You Listen To It?: Maybe.

While it should be appreciated that The Orwells really did try for something relatively new it does not quite stick with you. If you have been a long-time fan of the band you will have no trouble getting into this record. Otherwise, if you are new, you probably will just end up cherry-picking a few tracks to listen to. It is a decent punk record for what it is, but does give off the feeling that it tried just a little too hard to be something it is not. We might have to wait a few more years until we actually see a garage rock revival.