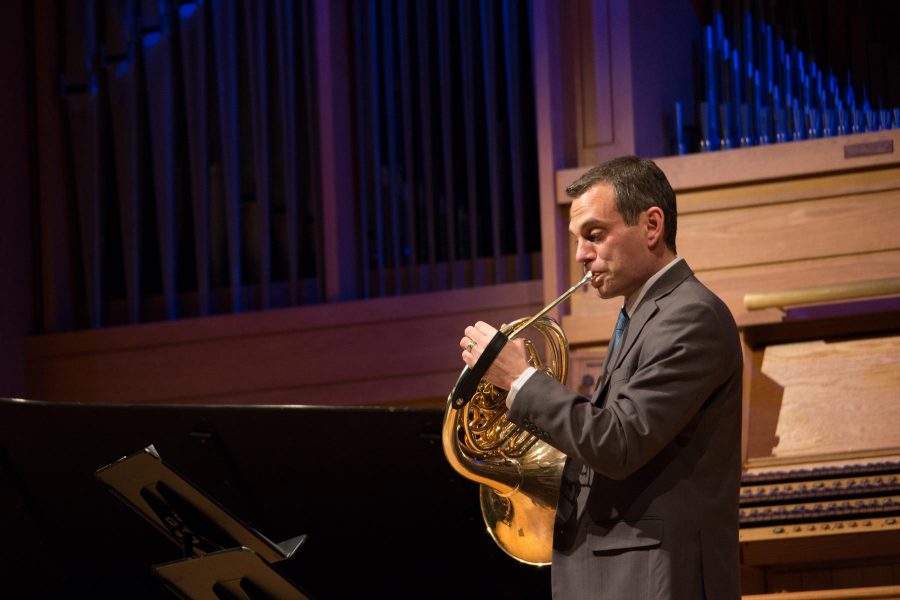 The first Virtuoso Series concert at the University Center for the Arts featured horn soloist John McGuire with Joel Bacon and Tim Burns accompanying on piano. The second movement also featured John Seesholtz as a narrator.

The concert began with “Konzert fur Waldhorn in E flat” by Christoph Forster in three movements: Con discretion, Adagio and Allegro. Bacon began the piece with a lively piano intro, and McGuire came in with fast-paced horn runs and jumping octaves. The two bounced off each other, the piano softening during horn features and McGuire stepping back from the stand during piano features.

For the second movement, the music switched to a slower pace but changed from a minor key to a major key multiple times. After the downtempo ballad, the steadily swift third movement reintroduced complex runs in both instruments. The horn rapidly jumped between low and high notes, which requires a great deal of embouchure control and years of skill development.

The second piece was, as McGuire described it, “a bit of an experiment.” Seesholtz stood at the front of the stage and recited poetry in German, then sat down while McGuire, with Tim Burns accompanying on piano, played a musical piece that portrayed the emotions spoken in the poetry.

The first movement, “On My Sweetheart’s Wedding Day,” began with Seesholtz’s voice carrying dread and malaise across the hall. The accompanying music featured drawn-out, melancholy horn and a desperate-sounding pairing. Seesholtz used his voice in “This Morning in the Fields” to mimic the sound of birds chirping and portrayed the general feeling of optimism and brightness written into the poem. McGuire and Burns then launched into a major key with high trills and a fast, upbeat tempo. Seesholtz shouted half of “I Have a Burning Knife” before the music presented a stormy piece filled with discord, anger and pain. At the end of his recitation of “My Sweetheart’s Blue Eyes,” Seesholtz faded into a contented whisper. McGuire and Burns closed the act with a slow, major-key piece that ended on a peaceful high chord.

McGuire introduced the piece “Nocturne” by Traci Mendel as one very close to his heart; the composer had presented him with the handwritten manuscript of the piece as a birthday present. The discordant notes of the contemporary solo started as low and ominous, later calling for a mute in the horn for a more strained sound. The piece resolved some chords but left others open, creating a unique sound that added a modern element to the concert.

The final piece of the concert was a well-known horn solo by Richard Strauss called “Concerto in E flat, op. 11” in three movements: Allegro, Andante and Allegro. The first movement brought a flamboyant march style with soaring high notes, runs and swelling crescendos.

The second movement presented a ballad with enormous dynamic contrast and victorious resounding notes that harmonized with the piano accompaniment.

Finally, the last movement of the night depicted equal senses of thrill and resolution with fluctuating tempos and rhythms. The syncopation in the piano accompaniment decorated the brisk arpeggios in McGuire’s horn part. Both instruments would change dynamics and burst in and out of the piece.

With a pounded chord on the piano and a slammed high note in the horn, the concert concluded to enthusiastic applause from the Organ Recital Hall.