Alec Reviews Music: As It Is brings fresh music to pop-punk 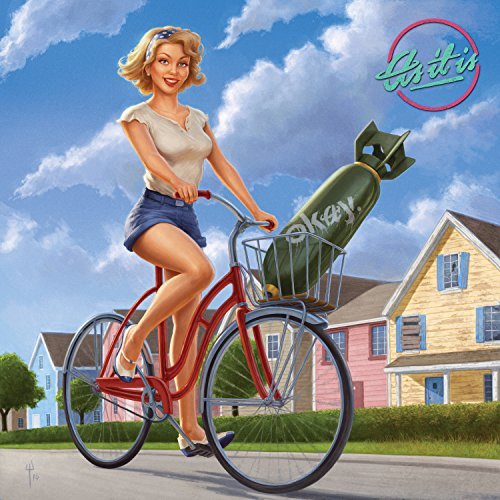 It is not often that we see bands completely open up in such a blunt way with their music. When it does happen, it is something to be impressed by. The latest release of from pop-punk band As It Is is not trying to be relatable for the sake of being relatable. “Okay.” is some of the most refreshing music to welcome into the scene. There is a lot that this latest record brings to the table.

UK based band As It Is are relatively young in comparison to a lot of the bands in the pop-punk scene. Starting back around 2012, the five-piece band are a good mix of the pop-punk and emo scenes and are some hardworking musicians as well. In their now almost five years they have released four extended plays, and one other full length record “Never Happy, Ever After” back in 2015. While the album did well in the UK, it did not climb nearly as high in the charts here in the states. It was only just a matter of time before another record would make its way out and after releasing a couple of singles in 2016, we finally have the sophomore record from As It Is, “Okay.”

“Okay.” is a 11-track record that clocks in to be around 37 minutes long. Structurally from front to back this record gets more emotional as it goes on. While it is a lot more well-rounded than “Never Happy, Ever After,” it does have some of the band’s best writing to date. It is a lot more emotionally charged than previous works. One of the most notable things is that none of the tracks necessarily feel like a filler track, everything on this record either serves a purpose or tells a story, which makes listening through a lot more enjoyable. In addition to the improved writing skills we are also seeing the band add some more heavy work in this record. There is plenty here that keeps the sound fresh and appealing.

Musically, we are seeing a lot heavier elements and more focus on guitar this time around with “Okay.” There is a lot of that classic light pop-punk sound that we have grown used to with As It Is with tracks like “Pretty Little Distance” or “Okay” but after that, the record really begins to open up with a more refreshed sound. Melodies are memorable and there are tracks with some pretty good hooks in them as well. On a technical level tracks like “Patchwork Love” or “Until I Return” really show the band’s true skill as musicians. If you really want the tracks that earn that punk title though, you do not have to look further than “No Way Out” or “Soap.” Even if you are just a casual fan of the genre, “Okay.” has a wide diversity that is appealing enough that you should not really have a hard time at all finding a favorite track.

Lyrically, we see the band open up on a lot of past struggles here, and they really emphasize the point on how it is OK to be sad. We see tracks like “Curtains Close,” which tackles the idea of divorce at an older age and what that is like to go through it. Additionally, the family element plays a big role in “Hey Rachel,” which is about not being there for a sibling. There is also a lot of reflection of the past, tracks like “The Coast Is Where Home Is.” “Okay.” is one of those records where it not only tries to reflect on past experiences but also is written in a way that looks forward to the future. There is a lot of hope with this record, whether that hope is about relationships, failures or family, there is something that everyone should find relatable here.

Should you listen to it?: Yes

As It Is might be some of the new kids on the block in the pop-punk genre, but they have more than proven their worth with “Okay.” This is one of those records that even if you are not that into the scene it is worth checking out. There is a lot here for everyone, and while it is more on the shorter side, this record is really well written both lyrically and musically. As It Is are proving that 2017 is going to be a good year for music.