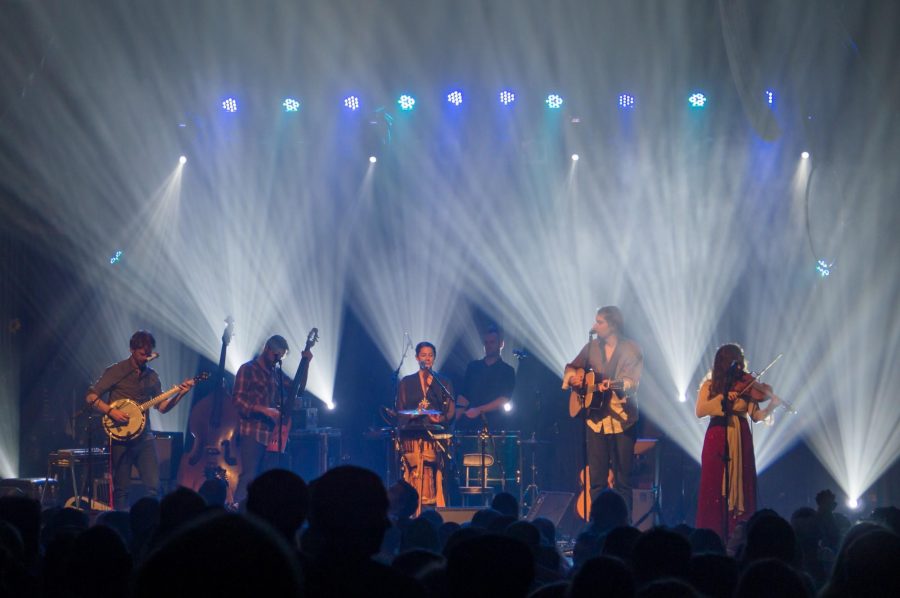 The Aggie Theatre welcomed three Colorado bands for a night of good music with an environmental message.

Elephant Revival and Gipsy Moon, both hailing from Nederland, Colorado, visited the Aggie on Friday, Dec. 9.

The night started out with Colorado band Gipsy Moon. The five-piece band from Nederland, Colorado played an eclectic mix including some songs from their 2016 album “Sticks and Stones.” They lived up to the Gipsy in their name by playing a mix of folk music incorporating many different styles and touching on music inspired by different cultures.

The band played songs anywhere from an Irish flare to a Turkish one. Switching quickly between multiple beats, the crowd happily danced along with each style of music that the band displayed. The band was excited to play with Elephant Revival, who they got connected with by friends and the Nederland community. The bands connection may have been initiated by Vince Herman from Leftover Salmon. He is influential in the Ned music scene, also his son Silas Herman is the mandolinist for Gipsy moon, according to Gipsy Moon’s cellist Andrew Conley.

“A lot of the Ned music scene is because of Vince,” Conley said.

Bluegrass bands including Yonder Mountain String Band, Leftover Salmon, The String Cheese incident and Elephant Revival are all a part of the music scene of the 2,000-person town, according to Conley. The musicians who are a part of this scene are “a lot of hippies jamming out,” Conley said. The style that music that comes from this community is “very natural, not forced,” he said.

The Plentywolf Singers, a traditional Lakota drum group from Denver, Colorado, gave a short performance of traditional Native American drumming and singing. Lee Plenty Wolf spoke to the crowd about his experience protesting the Dakota Access Pipeline in North Dakota. He spoke about the importance of water for everything. “It’s in beer,” Plenty Wolf said.

Elephant Revival continued the message of water protection throughout their set. Also from Nederland, the band had a similar style to Gipsy Moon but had a more whimsical and folky side to them. Vocalist Bonnie Paine’s delicate but haunting voice brought a magical air to the music. Paine accompanied her vocals with unique instruments including a washboard that she tapped on with metal-tipped gloves that she would adjust with pliers in between songs and a saw that she played with a bow.

The five-piece group were talented and their stage presence was warm and serene as they calmly swayed and smiled on the stage to one another and to the crowd. The crowd sang along to favorites including “Sing to the Mountain,” “Grace of a Woman” and “Ring Around the Moon.”

The songs had an emphasis on nature with songs about ravens, water, flowers and the seasons. Paine and fiddle player Bridget Law spoke in between songs about the importance of water. The song “Drop” resonated with the band and the crowd with Paine singing “once I was a big drop of water. I spread around and became part of many living in the land.”

Ariana Papousek, an aerialist acrobat, performed above the band using a hoop and ropes that were attached to the ceiling. She accompanied the song “When I Fall,” dramatically falling from the air with the chorus.

Elephant Revival ended the show with an intimate encore performance sing-along with the crowd. The mood was peaceful as everyone sang in unison.

The Colorado bands were happy to perform at a familiar venue.

For Conley, the night was special because he enjoyed the crowd and playing with his friends in Elephant Revival.

All three of the bands support valuing the environment and especially valuing water. The bands spoke about the protest and there was truck that collected items for the protesters at Standing Rock, North Dakota at the concert.

“I just like seeing people actually protest,” Conley said. “Regardless of the cause, I want them to get out there and actually fight the system a little bit.”

Beyond exercising the right to protest, Conley supports the rights of Native Americans.

“They’ve just been shat on for a couple hundred years now, so you can’t just keep taking over their treaties and cancelling that shit,” Conley said. “It’s bullshit. It’s rude. Fucking rude government.”

According to Conley, music cannot solve the world’s problems, but it is very important for the people who do try to save the world.

“Music is a good distraction,” Conley said. “A distraction in a good way, everyone needs it. You can’t focus on the shit all the time. You’ll hate your life. You’ll explode. You gotta take time for yourself and make yourself feel good. Maybe you can inspire feeling and maybe make them stronger in a way. I think a lot of real change happens at a down and dirty level that’s not pretty.