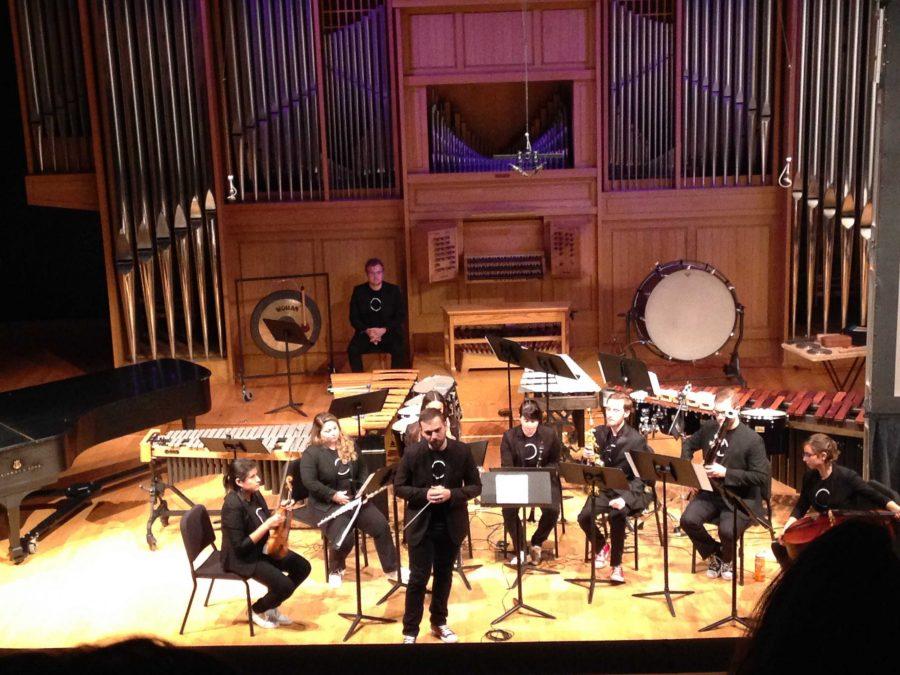 The New Music Ensemble prepares for their second piece of the concert. Photo credit: Mckenzie Moore

On Nov. 13, the New Music Ensemble at Colorado State University performed four pieces of unusual music from modern or very recent composers. The show was sold out and had a growing waiting list of students hoping to see the talented group of performers. Wesley Ferreira and Andrew Jacobson conducted the concert.

The program for the concert reads, “It Could be Anything New Music Ensemble is about collaboration. Each member is an active contributor. Composers collaborate with performers for synergistic creation. The ensemble engages with the community to achieve cultural relevance. Guest artists and composers are invited to participate for the incorporating of new ideas and vigor. What happens when this group comes together to combine its energy, talent and vision? It Could Be Anything.”

The musicians rotated for each of the four pieces. For the first, a slow-motion movie played out as strings, percussion and woodwinds played a simple melody to accompany the film. Their music gave life and emotion to the otherwise silent video and allowed the story to take on meaning. Without the simple and beautiful music behind it, the movie would have confused audience members… with it, the story became powerful. The 2004 “New Year’s Harmattan” by Robin Cox showcased each instrument and created an atmosphere of strange mystic to parallel the short film.

The 1924 “Chôros No. 7” by Heiter Villa-Lobos, who lived from 1887 until 1959, presented a piece that varied in tempo and combined strings and woodwinds for a discordant, minor sound. Multiple moving parts and counter-melodies, with a low, sustained harmony in the percussion, kept the piece interesting before resolving into a major key. The tempo kicked back up and all the instruments burst into a flurry of runs and rapid melody lines to conclude the piece.

The next piece featured a larger combination of piano, percussion, woodwinds and brass. The disconnected and discordant instrument parts created an unusual and unique sound. The brass muted and unmuted at various points in the music to fit with the aesthetic the piece provided. The piano performed solos at certain points in the music as well, and the pairing of a strong percussion foundation with dynamic fluctuation made the 1976 “Black Topaz” by Joan Tower a fascinating piece to listen to. It also gave the students taking music appreciation at CSU who attended the concert a new perspective on a unique but rarely-played genre of music.

The final piece accompanied an abridged version of the silent film “Metropolis,” with the disconnected and syncopated rhythmic patterns of the 1975 Worker’s Union by Louis Andriessen. The musicians stayed in time with the film to bring its black-and-white story to life, as the music itself sounded like the noises one might hear in the factory from the movie. The performers played traditional instruments alongside unexpected ones, such as bowls of varied sizes sitting on a plank of wood. All the performers stopped their music in precise, perfect time with the movie immediately going black, leaving the Organ Recital Hall in darkness and resounding silence.