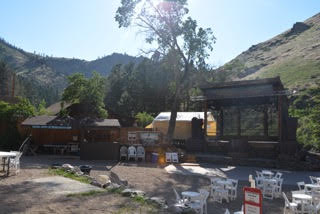 The outdoor stage at the Mishawaka Amphitheatre is situated on the Poudre River. Photo credit: Randi Mattox

Although it may feel that concert season is coming to a close, the historic Mishawaka Amphitheatre is nowhere near ready to say die. The venue has a packed fall series ahead full of some of the hottest bands in the northern Colorado music scene.

Currently celebrating their one 100 year anniversary, the Mishawaka is one of the most iconic venues in the state. With a stage right on the shore of the Poudre River, with mountain scenery, a cabin-style restaurant and indoor venue, the Mish is a popular site in northern Colorado.

Although summer may be behind us now with the impending arrival of winter, the Mish still has plenty to offer; Besides the breathtaking scenery of the Poudre Canyon in fall.

The indoor venue, the SpokesBUZZ Lounge, is a room that makes the venue’s extensive history impossible to ignore and a perfect setting to experience the exciting concert lineup that Mish owner Dani Grant “hopes will be a great experience for CSU students.”

“The Mish offers an intimate rustic setting that aims to deliver quality experience,” Grant said. “If you make the trip, you will get what you came for.”

Among the lineup are bands WhiteWater Ramble, One Flew West, BANDITS, Wasteland Hop and The Other Black. Ranging from bluegrass to hip-hop, this ultra-diverse lineup presents some of the best music northern colorado has to offer. Dates are as follows:

Fort Collins based WhiteWater Ramble has a sound described as “high-octane Rock Mountain dancegrass,” according to their website. They are currently on tour in support of their second album release “Roots & Groove.” They will be performing with American artist Derek Blake.

One Flew West was formed in 2010 and “delivers a live show that hits you in the face with the force equivalent to a kick from John Claude Van Damme,” according to the band’s website. They will be performing with BANDITS, a Denver based band “straddling the line between psychedelic and downright explosive.”

Friday Dec. 2: Wasteland Hop and The Other Black

This exciting night of hip-hop will bring some of Colorado’s most prevalent artists in the genre to the stage. Wasteland Hop is Fort Collins based and has played with the likes of Flobots, Air Dubai, Zion I, Talib Kweli and Macklemore & Ryan Lewis. The Other Black is comprised of near 30 experienced musicians who offer “an experience unlike anything you have yet to observe in the Denver music market,” according to the band’s website.

The Mishawaka will be closing out 2016 with a party featuring one of the one of the longest-running Grateful Dead tribute bands in the world, Shakedown Street. Ticket prices for this one includes a midnight champagne toast.

For more information on upcoming events at the Mishawaka Amphitheatre, their full event calendar and tickets are available on their website at themishawaka.com.