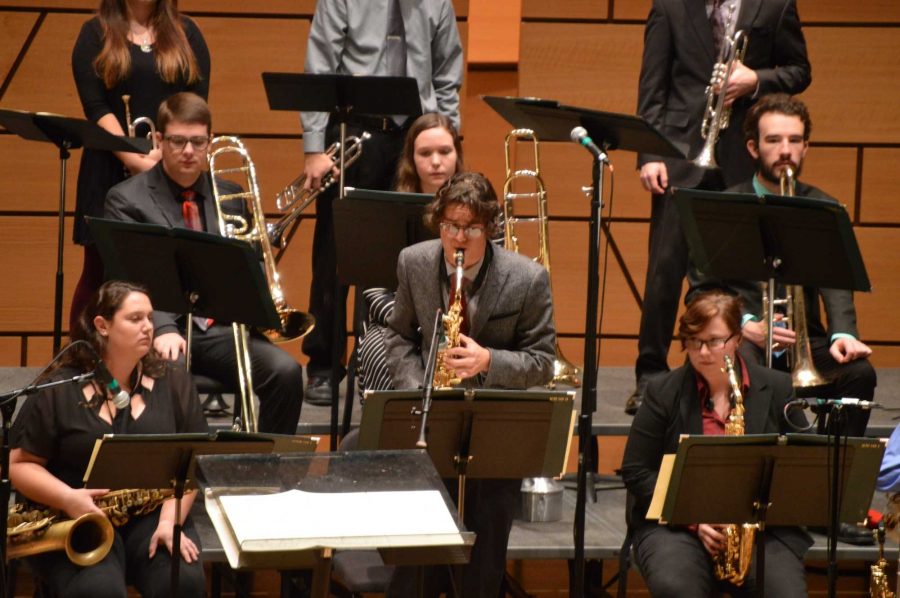 Conductor Wil Swindler strolled up to his podium, snapping his fingers in time. His band, along with the packed auditorium, sat at attention. Pianist Garrett Welch watched for his starting cue, baritone saxophonist Jimmy Ackermann ready to launch in with his solo. In this style of music, improvisation is the name of the game. This is jazz.

The CSU Jazz Ensembles performed at the University Center for the Arts Thursday night in a program titled “Jazz Ensembles Concert Travels in Time.” For their respective bands’ final concerts of the semester, conductors Wil Swindler and Peter Sommer selected a program of music celebrating the great composers for big band from the Swing era to the Cyber age.

Jazz Ensemble II kicked off the night with “Ticker” by Bill Holman. Welch and Ackermann opened with a solo before giving way to the brass section in its full glory. In between sections of the “big band” as it is called in jazz terminology, different saxophones took turns with their own unique solos, each time followed by a peel of applause. Solos in jazz music follow the chart, a description of the song’s chords and rhythms so that players can improvise while staying in beat and tune.

“Ticker” was followed by Sammy Nestico’s slower and more impassioned “Soft as Velvet.” Drummer Tim Sanchez’s snare brush created a smooth atmosphere for alto saxophonist Brittney Davis to shine in. The piece invoked scenes from old crime dramas like “Chinatown,” with the image of a seasoned New York detective walking the streets alone in the rain, pondering some troubling case. For the finale, the trumpet section quickly swapped in horn mutes.

Ensemble II pianist Garrett Welch liked the following song “The Deacon” by Thad Jones the most out of his night’s repertoire.

“I liked that tune because it just grooves with the swing feel,” he said. “It’s a lot of fun.”

“The Deacon” featured the piano prominently along with the drums to create what Welch described as the song’s “slow, bass-y tune.”

Ensemble II concluded their half of the concert with “Aachen” by Tyler Gilmore and “Mel” by Jim Mcneely. Both songs tested the skills of drummer Tim Sanchez, as he had to switch out his sticks for mallets and engage in a solo, during which it seemed as though he had the freedom to chose when to cue in the rest of the band for the finale.

Conductor Peter Sommer lead Ensemble I into a more difficult and technical set of songs in the concert’s second half. For the Billy Strayhorn song “Bluebird of Delhi,” Sommer instructed the woodwinds to tune their instruments in preparation for the song’s complex trills. Inspired by an actual Bluebird’s song Strayhorn heard outside his window while touring Delhi, this piece truly brings its subject matter to mind.

With W.C. Handy’s “St. Louis Blues,” Ensemble they went back in time to 1914 to play a composition by a claimant to the invention of jazz itself. Aidan King on the trombone and pianist Hannah Lentz let their talent out in this look into the origins of swing.

One of the ensemble’s own wrote the night’s concluding piece “The Wind-Up Bird.” This modern swing tune by Wil Swindler, taking inspiration from the Haruki Murakami novel of the same name, displayed the virtuosity of drummer Matt Brown as he played confident fills and solos. It was met with exclamations and applause from the audience after Brown concluded with a single cymbal crash that slowly faded into the walls.

In the lobby after the concert, Brown explained how the speed, energy and straight-forwardness of “The Wind-Up Bird” made it his favorite selection to play.

Further adding to the list of reasons to be impressed by Ensemble I was the fact that not only do some of its personnel play multiple instruments, but “a lot of those guys were playing instruments that were not their primaries,” Brown said. “They are playing stuff that they rarely play.”

To learn about more performances offered by the CSU School of Music, Theater and Dance, check out the UCA ticket office or go to their website here.