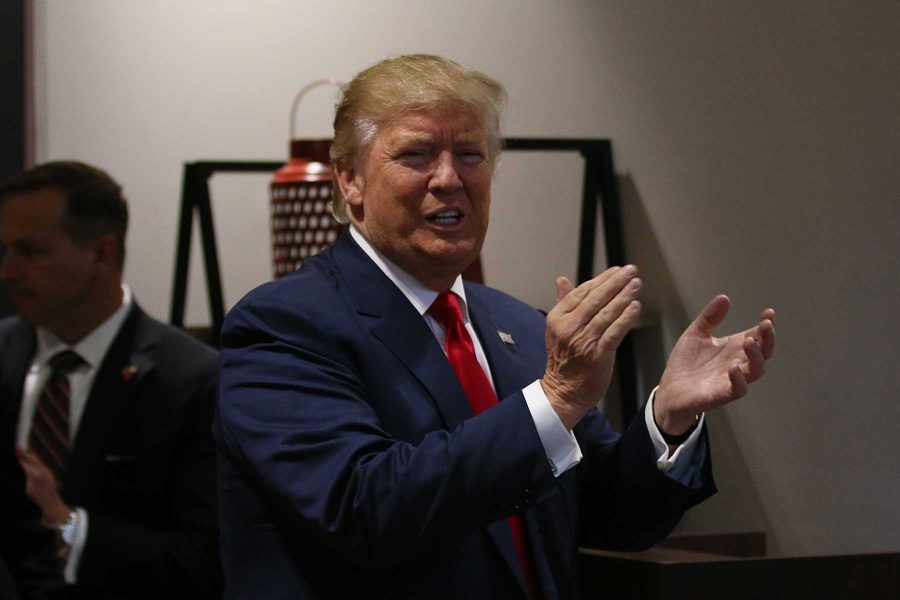 Donald Trump enters the calling rooming upstairs in the Budweiser Event Center prior to going on stage on October 3,2016. (Elliott Jerge | Collegian)

As I settled into my soda-themed pajamas, assembled my routine dinner of a day-old, half-empty sprite and a mostly-empty bag of week-old tortilla chips and prepared to write a Collegian article on the third presidential debate, I thought to myself, “How is it even possible that I’m still single?”

Donald Trump looked significantly frightened when he walked on stage and found himself face to face with his worst nightmare: the stay-puft marshmallow man with a blonde mom haircut. Trump had a significant hurdle to climb in this debate considering that FiveThirtyEight gave him a 12.6% chance to win the election. But, we all remember the famous Star Wars quote, “never tell me the odds, because they’re rigged by elitist left media, wrong, wrong, bigly wrong.”

Trump only sniffed a few times this debate, so either he got off the cocaine in anticipation of the drug test he called for, or his campaign has run itself into the ground so hugely and tremendously that an orange brother can’t even score a hit of blow from the soon-to-be walled borders to Latin America.

America’s darling Ken Bone seems to have failed in his mission from God to quell the violent rhetoric of the debates. Trump just got more and more vicious, while Hillary sat back, staring into the audience and daydreaming about finally finishing the advent calendar counting down to the presidency she made while still in the womb.

Chris Wallace really laid down the law at the beginning of the debate when he told the audience not to make any noise and to be respectful of the position one of the candidates will soon occupy. We were all then immediately treated to a super-bowl style montage of Trump and Clinton delivering their essentially patented insults at each other over inspirational fight music.

My roommate and I decided that Hillary must wake up late at night screaming and sweating, saying, “I’M NOT WRONG. I’M NOT. YOU’RE WRONG, DONALD,” then she proceeds to get a tall glass of milk from the fridge by her private server. Like we all do.

Trump also drank a whole lot of water during the debate, and if I’ve learned anything from all of the free restaurant water I nervously drink on dates when I have nothing to say, Trump himself must be in some hot water. At least he will go back to normal two years from now, and when reporters ask him about the election, he’ll just smile his charming smile and say, “What election? I never did that. That’s been debunked.”

The funniest thing about this article is that, in our pop-media hungry world, these little details are actually what mattered. The truth of either candidates statements makes no difference to anyone anymore. Only headlines, insults and rumors can convince voters. These debates are just the equivalent of two professors trying to teach one class at the same time, except neither of them say anything, only pandering to their sides.