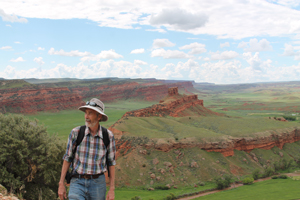 “Archaeology is frickin’ pathetic,” said professor Robert Kelly during a speech on his new book “The Fifth Beginning” at the Lory Student Center Friday.

After over forty years in the field, Kelly was ready to share what he has found out with the rest of the world.

Kelly is a professor of archaeology at the University of Wyoming. He has written over 100 books and articles on the subject, including a popular introductory textbook used in departments across the country. With this new book, “The Fifth Beginning,” Kelly hopes to put to paper his perspective on the history of human evolution and its future in a compact form digestible by laymen.

His book begins with descriptions of the four previous human “beginnings” or cultural transformations. If the history of humanity was a movie, these would be the plot twists, Kelly said.

The first beginning was the origin of technology, the first uses of tools.

Next came the origin of culture, or as Kelly would rather call it, the origin of the capacity for culture. This is when people started to conceive notions about how the universe should operate. The first artworks like cave paintings were direct results of these notions, as people saw the world operating in ways they did not understand.

Twelve-thousand years ago was the third beginning, the origin of agriculture. Hunter-gatherers did not move around as much and started trading their crops with other stationary groups.

This sedentation evolved into the fourth beginning 5,000 years ago, the origin of states. Farmers decided they would rather deal with bureaucrats and pay taxes, Kelly joked.

The classical theory of archaeology ends here with the things we can discover today. But Kelly looks toward the future. What will the archaeologists of tomorrow discover? Kelly sees a fifth beginning at around the year A.D. 1500. After this year, shipwrecks pop up in every ocean. The genetic distribution of our species changes as people migrate across the globe. Trace elements in our bones, coming from our diet and used to determine a fossil’s geographic origin, become unreliable after 1500 due to globalization; we eat avocados from Guatemala and oranges from Florida. All of the indicators of a major shift in human society are present, Kelly claimed.

If we are living in the fifth beginning of human evolution, then what big change are coming our way? Kelly likes to imagine trying to explain the moon landing to the first hunter-gatherers. Where do you start? Yes, people walked around on that, and they got there on an exploding metal tube because a leader in a democracy said he would do it with everyone’s tax dollars. There is a lot to unpack in that sentence. We are like those poor hunter gatherers, hopeless to comprehend the scale of change civilization is set to undergo. Luckily, Kelly does give some predictions.

“I have seen yesterday. I know tomorrow,” reads the inscription on Tutankhamun’s tomb, now a sort of motto for archaeologists and historians. Extrapolating trends can help us know what to expect in the future. As the nations of the world continue to align in trade deals and organizations like the United Nations, Kelly says it is not unreasonable to one day have a single government control the entire planet. He also notes that war has steadily been becoming more and more expensive, nearly to the point where it has ceased to be a viable option to solve problems with. Capitalism necessitates cheap labor. Where will all the labor go when there aren’t any developing countries left? Capitalism as we know it will definitely disappear, Kelly claimed.

All of this change, unlike the beginnings of the past, will be intentional. For the first time ever, we as a species can decide what happens next, rather than let change just happen to us as it did to the first farmers.