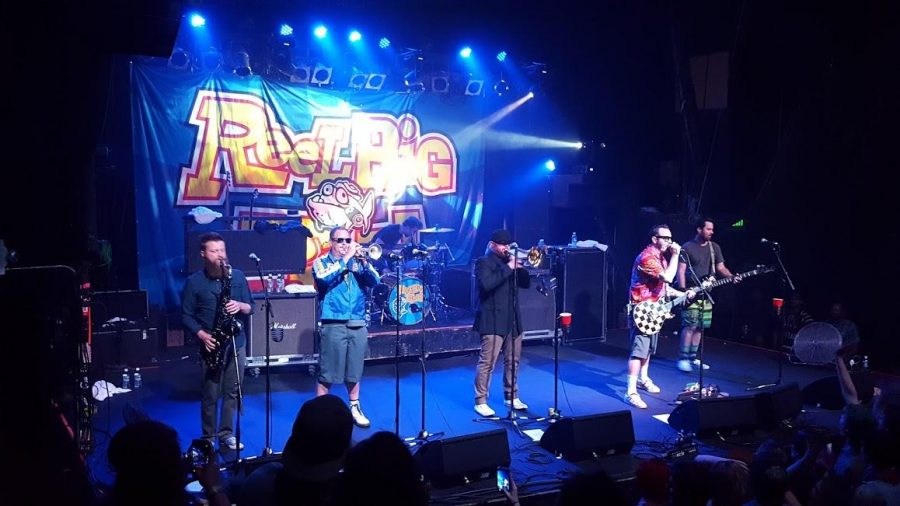 Reel Big Fish play a show at Aggie Theatre on their 20th anniversary tour for "Turn the Radio Off." Photo credit: Zoё Jennings

As part of a 20th anniversary celebration tour for the band’s 1996 album “Turn the Radio Off,” the event brought out a diverse crowd, from current college students to those who remember seeing the band in the mid-nineties.

“I couldn’t count how many times I’ve seen them,” John Hendricksen said. “At least 30 times—at least. The first time I saw them, they opened for Dispatch in the gymnasium at my college in 2001.”

The first band to play was a young, seven-piece ska band called Stacked Like Pancakes that was reminiscent of what Reel Big Fish looked like in their early days.

They played catchy pop-punk ska with soaring horn melodies and crunchy guitar solos, all the while jumping off speakers and performing synchronized dance moves.

The crowd was genial, and they embraced the gang of ragged-looking ska kids with banana patterned shorts and goofy grins.

The next act, PPL MVR, offered an enigmatic mix of electronic and metal genres with metallic-sounding vocal synthesizing. Three of the five-piece band dressed in full body suits as gigantic hairy yetis.

They put on a theatrical performance for a perplexed, yet excited crowd.

“Boys and girls, are you ready to experience 30 minutes of confusion?” asked the vocalist dressed like a Yeti-Elvis.

The band followed through on their promise of confusion. They struck the crowd with overwhelming vibrations from a bass guitar with only two strings, sang with robotic voices and frequently wandered around the crowd. A projector screen played videos of sharks swimming, animals hatching and North Korean soldiers marching.

“I like their outfits, I really do, but their music kind of sucked,” said a woman self-identifying as Miller.

She is a CSU alum who’s partied hard at Reel Big Fish concerts seven times since the mid-nineties.

At last, Reel Big Fish took the stage and began playing the traditional football chant “Olé” to get the crowd excited and set the mood for their inevitable joking tone.

As the band jumped into playing “The Setup,” the crowd burst into a flurry of mosh pits and skanking, a common style of dance for ska music.

After playing a couple of their more recent songs, including “Another F.U. Song,” singer Aaron Barnett told the crowd they would be playing the entire album “Turn the Radio Off” that night in celebration of its 20th year anniversary.

“It’s gonna be a long 38 minutes,” Barnett said with a smirk.

The album began with the song “Sell Out,” their most successful single to date. Later, they played slightly different variation of “She Has a Girlfriend Now” without the recorded version’s female vocalist.

“Ladies and gentlemen, this next song is supposed to be a duet between a man and a woman,” Barnett said.

When the time came for the two singers, the band’s gruff bearded saxophone player delivered an impressive falsetto voice for the part originally sung by Monique Powell of ‘90s ska band Save Ferris.

“Give it up for Saxl Rose!” Barnett said after the song.

Reel Big Fish tends to jump at any chance to make the crowd laugh. They performed the song “Suburban Rhythm,” before following up with brief covers of the same song in varying genres from disco, to country and death metal.

After the band had finished and left the stage, chants for an encore thundered as the crowd roared, “Reel Big Fish, Reel Big Fish!”

When Reel Big Fish returned to the stage, they ended the show with a performance of their 2002 single “Where Have You Been.” The crowd erupted into a frenzy with beer spraying into the air and the dance floor was fully revived for one last song.

Reel Big Fish began in 1991 and rode the wave of the ska genre’s popularity at the time to become one of the most successful ska-punk bands in history.

Though the genre is less popular today, the band plays for thousands of devoted fans all over the world. The band tours nonstop and plays over 250 shows every year, playing at the Aggie Theater most times they visit Colorado.