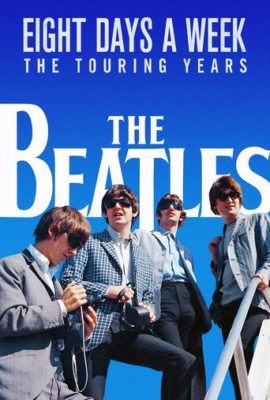 Ron Howard’s recently released documentary, “Eight Days a Week-The Touring Years,” provides new look into their early fame and success of The Beatles. This two-hour long documentary includes rare concert and interview footage that immerses fans inside the world of The Beatles from the years 1962 to 1966, and is a must-see for not just Beatles fans, but for anyone that is even a little interested in their careers.

“Eight Days a Week-The Touring Years” offers a look into how The Beatles began, their lives on tour and their studio recording process. It ultimately seeks to reveal the evolution of their career.

The concert footage is undoubtedly what makes this film most enjoyable to watch. The world was crazed with “Beatlemania,” and this phenomenon clearly shows in the concert footage. Images of screaming, crying and fainting girls are non-stop in the film. The amazing restoration of the footage and photos brings this musical experience to life.

The film put together different forms of media to show the personalities of the young Beatles. Interviews conducted during the time show The Beatles’ humor and quirky nature with the press. Audio of the band’s time in the recording studio brings the audience into the studio with them. Newspaper excerpts and radio talk show clips also work to put fans in the era of The Beatles. Footage from early TV appearances lets the audience see how The Beatles exploded into the spotlight both in the U.S. and abroad.

The interviews in the film give the audience personal accounts from people directly involved with The Beatles and current celebrities that experienced their concerts at the time. Some notable interviewees included Whoopi Goldberg, Sigourney Weaver and Elvis Costello, as well as Larry Kane, a news journalist that had the opportunity to travel alongside The Beatles on tour in the ’60s.

Of course, the movie included interviews from the surviving band members themselves. Paul McCartney and Ringo Starr provided insight on how the band met and the struggles of the young Beatles. McCartney and Starr also spoke about how they wrote their music and recorded it in studio. Old filmed interviews with John Lennon and George Harrison provided their perspective on the time in their early careers as well.

The documentary also covers the controversial moments of The Beatles that many modern fans may not be aware of. The movie highlights the backlash the band faced over the desegregation of their shows during the time of the Civil Rights Movement in the United States. One controversial interview also led them into mass backlash from fans. The movie emotionally brings these moments to light using interviews and footage from the time.

Watching The Beatles quite literally take over the world is invigorating. Australia, Italy, France, Japan and China are only some of the counties that The Beatles visited during these touring years. The movie includes concert footage at all of these places.

The only thing that the audience must be prepared for is how long the movie is. However, the two hours fly by. The documentary is very easy to stay focused on, and invests the audience in the story of the early careers of The Beatles during the first couple of minutes.

“Eight Days a Week- The Touring Years” pulls the viewer into their lives and keeps them there with its use of multiple types of media, rare footage and emotional appeal. The documentary beautifully leads the audience to fully understand why The Beatles, one of the biggest bands of all time, decided to stop touring after this period of time.

“Eight Days a Week- The Touring Years” will be playing at the Lyric Cinema Café until Oct. 13. Also, stick around until the end of the credits. Just do it. It’s worth the extra time.