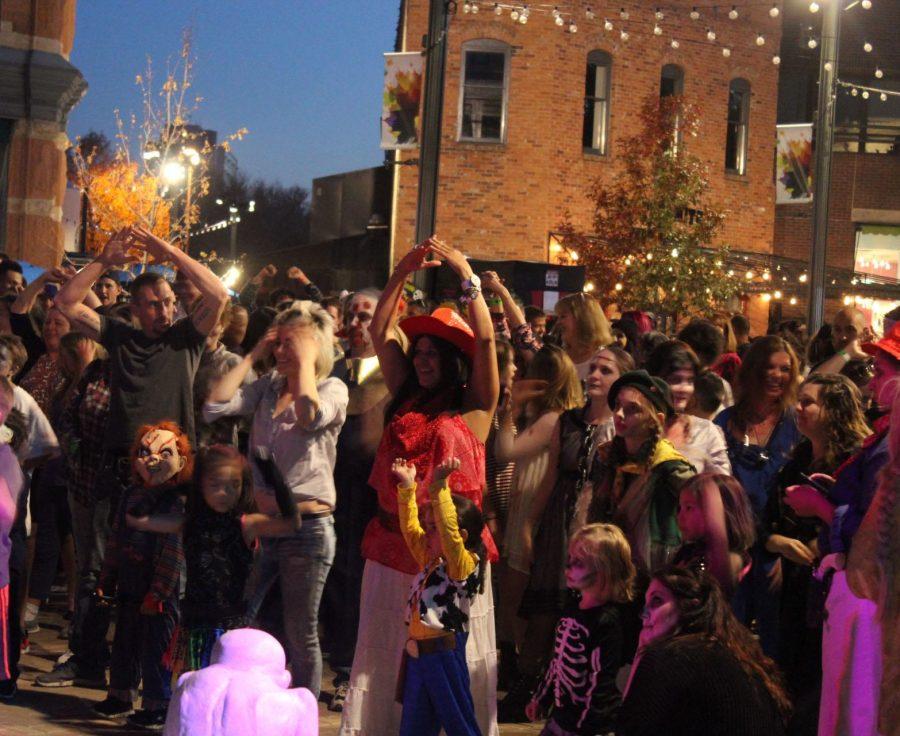 Old Town was quite the sight to see over the weekend. Zombies of all shapes, sizes and ages came out for the eighth-annual “Zombie Crawl” hosted by Turning Point. From Girl Scouts to Starbucks baristas, everyone was looking spectacularly undead.

“The entire event is a fundraiser,” said Turning Point employee Scott VonBargen. Turning Point connected with 56 local businesses in the Old Town area to raise money for their nonprofit organization that helps local youth with problems of behavior, mental health and substance abuse. Purchasing a $16 ticket got each zombie a map and a punch card. Zombies then moved around Old Town to the five businesses of their choosing and got something free for each punch.

The crawl stretched all the way down College Avenue in Old Town and branched out to the side streets, so no matter where you went you were likely to run into a participant. Old Town square was something out of a zombie hunter’s nightmare. Zombies collected by the stage to watch live entertainment. This included learning the moves to Michael Jackson’s “Thriller” and watching dance moves put on by local cheer and dance studios.

Between acts, DJ Matt kept the music going while dressed as a zombie Star Trek commander. Local kids debuted their Halloween costumes early while dancing on the stage. Some were zombies, some were princesses and some were terrifyingly realistic versions of Chucky and Freddie Kruger.

As the night went on, the entertainment got a little spookier. Fort Collins local Bryan Circus Knight took the stage to juggle skulls and twirl flames. He even balanced a flaming beam on his neck as he did a handstand, and swallowed his flames to put them out.

Also featured, was the sky-high Michael Jackson impersonator on stilts, Orange Peel Moses. He dressed as zombie MJ and bounced around and moon walked through the crowd, taking pictures with his zombie backup dancers.

A makeup tent was set up at Old Town Square for those who forgot their costumes but still wanted to participate. People from Juiced on Imagination came out to give professional looking face paint and gore to those who looked a little too living.

“We’ve been at (Zombie Crawl) since its inception,” said owner Julie Gillian. She and her team of ten offered their services all night, and charged based on the complexity of the look.

“Gore is running the most popular,” Gillian said. The gore they create looks very real, but is actually just made by building up wax, latex and a number of other materials.

“Look at this, it’s made out of maple syrup,” VonBargen said, showing off his seemingly torn up bicep. “I’ve smelled like maple syrup for hours.”

The team at Turning Point created all of this fun. They had the idea and have since been watching the event grow.

“We were looking for a niche that hadn’t been filled in the community for an event,” said Turning Point director, Stephanie Brown. “At the time there wasn’t really anything for Halloween.”

Brown talked about the changes the event has gone through over the years, including the ball after the crawl that has since being scrapped to make the main event even bigger.

“There are a lot of sad stories around Turning Point,” Brown said.“I like that we were able to create an event that attracts so many people and allows them to have a positive outlook.”