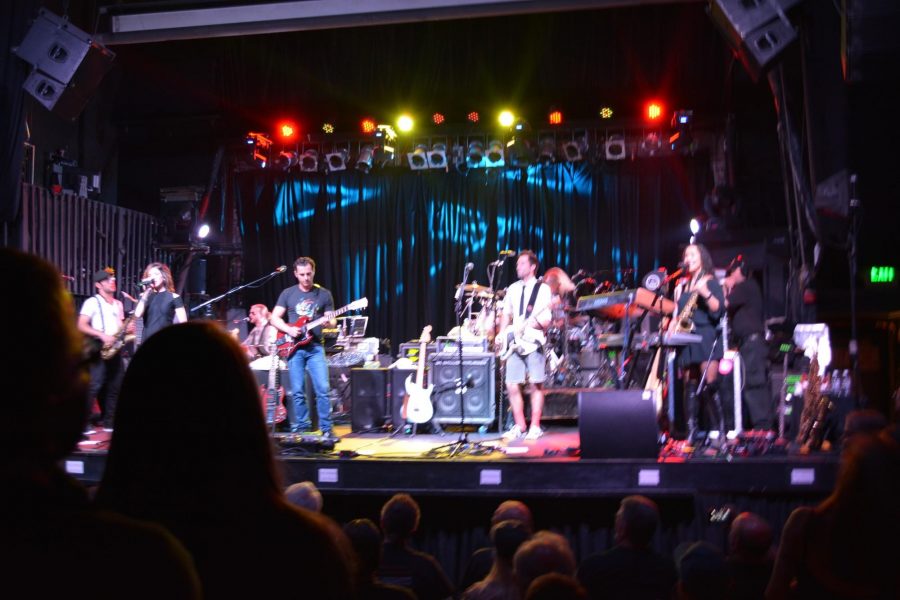 Dweezil Zappa, son of iconic experimental rock musician Frank Zappa, tours to carry on his father’s musical legacy. Dweezil Zappa is touring to celebrate the 50-year anniversary of Frank Zappa’s trend-setting album “Freak Out,” despite a nasty contractual dispute with his own family’s trust.

Dweezil Zappa played at The Aggie Theatre on his tour titled “50 Years of Frank: Dweezil Zappa Plays Whatever the F@%k He Wants – The Cease and Desist Tour” on Saturday, Oct. 8.

Originally playing under the name Zappa Plays Zappa, Dweezil could not continue to tour under this name. According to Dweezil Zappa’s website, the family dispute started with his mother, Gail Zappa, when she kept all of the merchandise revenue from Dweezil Zappa’s tours from 2006 until 2015. Following her death, Dweezil’s siblings Ahmet and Diva Zappa continue to restrict Dweezil’s efforts to play his father’s music with threats of legal action. They have sent multiple Cease and Desist letters to Dweezil Zappa. If they win the legal battle, Frank Zappa and his songs will have royalties and Dweezil Zappa will no longer be able to use his father’s name, he told the crowd during his show at the Aggie.

Despite this legal drama, Dweezil Zappa put on an entertaining show full of musical talent. The seven-part band played an array of instruments including saxophones, alto saxophones, kazoo, baritone saxophones, flute and others.

The three main vocalists had strong theatrical voices. At certain points during the show, all the members of the band joined in for moments of full and vibrant vocal harmony. Dweezil Zappa rarely sang but did his father’s songs justice on the guitar. Dweezil Zappa blew the crowd away with his talented guitar solos.

For a more expensive price, attendees sat on chairs that were lined up in the pit of The Aggie. This meant that there was no crowd of dancing people in front of the stage, which seemed odd. Some concertgoers paid extra to attend the sound check before the show.

During the show, Dweezil Zappa played his father’s music from several albums including “200 Motels,” “Joe’s Garage,” “Zoot Allures” and “Freak out!”

Dweezil Zappa and the band performed Frank Zappa’s songs in a way that captured their intended weirdness and this entertained the crowd full of mostly Frank Zappa fans. Dweezil Zappa and the band played the 1988 song “Black Napkin.” While playing “Teen-Age Wind,” Dweezil Zappa referenced his family’s legal battle while referring to the line “we must be free.” During the show, he told the crowd he was considering starting a crowd funding campaign to help pay for his legal fees, the crowd responded with cheers.

From the 1979 album “Joe’s Garage,” Dweezil Zappa played his father’s songs, which were provocative for their time including “Catholic Girls” and “Wet T-Shirt Nite.” Dweezil Zappa bantered with the crowd by saying “this song may offend some of you, but it’s okay, it’s music.”

Dweezil Zappa saved “Watermelon in Easter Hay” for the last song before the encore. According to the Zappa website, before his death, Frank Zappa forbid anyone from playing what he considers to be one of his signature pieces except for Dweezil Zappa. During the song, Dweezil had to wipe back tears between guitar riffs, as he became verklempt.

Dweezil Zappa also played “Doreen” and “Packard Goose,” which were crowd favorites. For the encore, Dweezil Zappa came back to play four songs including “Ride My Face to Chicago” and an unplugged version of “Cosmic Debris.” Dweezil Zappa’s set lasted for well over two and a half hours. With no openers, the crowd was engaged and happy to be listening to the endless flow of Frank Zappa music. The night ended with the band members bowing three times to a tired but grateful crowd.