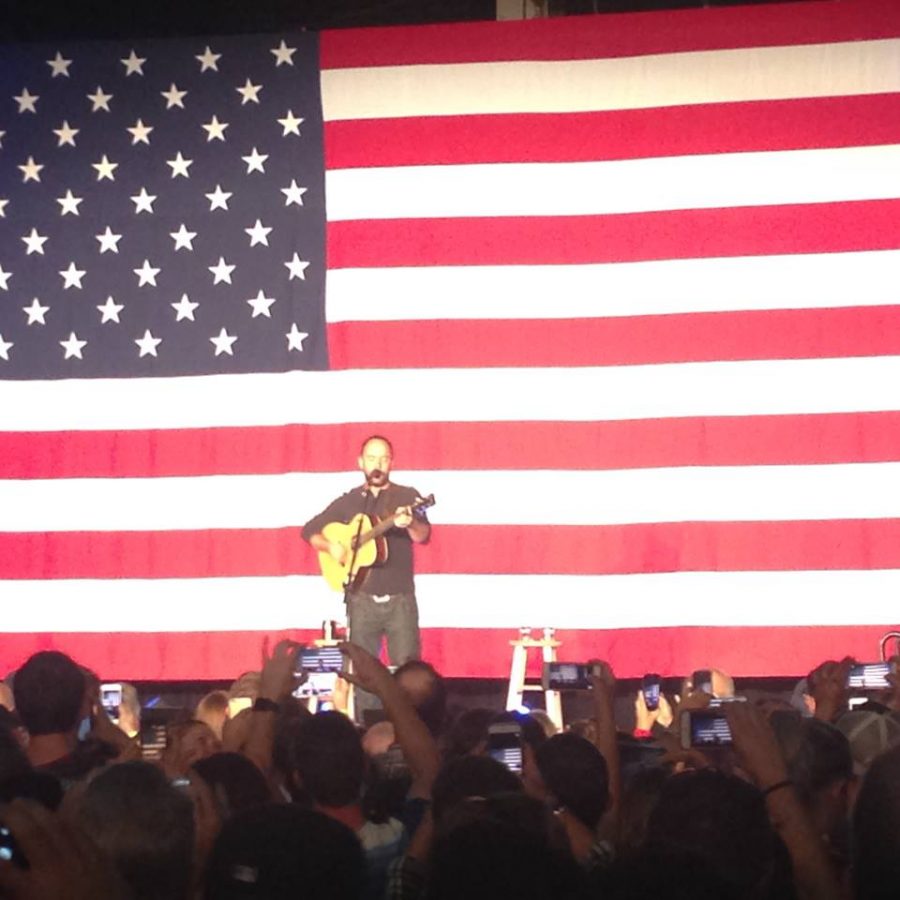 Dave Matthews performs at Get the Vote Out Concert Photo credit: Zoё Jennings

Bennet came out before the concert at about 12:45 p.m. to give a brief speech stressing the importance of voting in Colorado and attesting to the nice character of Kaine, who is Bennet’s personal friend.

Before Matthews’ performance, several other people spoke about their experiences of being undocumented immigrants in the United States. A transgender speaker told the crowd that they had a big stake in election in terms of LBGQ rights.

After the introductions, Matthews, with his signature mischievous smile, came onto the stage with acoustic guitar in tow. “I wanna get this out of the way,” Matthews said before playing one of his most popular songs, “Ants Marching.”

“I’m an immigrant,” Matthews said. “I didn’t come to take anybody’s jobs. I came to work.”

Matthews is an immigrant from South Africa and lightheartedly joked about the stereotypes that are often attached to immigrants who live in the U.S.

Matthews pointed out that the crowd is standing on “colonized ground.”

Matthews played songs from many of his band’s albums although the band members were not at the concert.

“It’s different to be alone,” Matthews remarked about his solo performance. “I kind of like it.”

Matthews played songs from his older albums including “One Sweet World” from his 1993 album “Remember Two Things” and “Don’t Drink the Water” from his 1998 album “Before These Crowded Streets.”

Matthews was able to entertain the crowd with his extensive vocal range and his typical screams and sound effects along with his talent for playing the acoustic guitar.

Matthews played “Loving Wings,” which has been released on six of Dave Matthews Band records. Matthews first played the song at the Pepsi Center in Denver in 2002.

Matthews also played one of the band’s new unreleased songs called “Samurai Cop.” It was apparent during the show that Matthews is a true performer and thoroughly enjoys playing music.

The crowd cheered when Matthews played the popular song “Satellite.” The acoustics of the complex made the song sound full.

Matthews closed out the set by wishing for a world “with less bombs and more peace.” Matthews told the crowd that it almost seems silly nowadays to want peace. He never explicitly told the crowd to vote for Hilary Clinton but seemed to be more interested in promoting the ideas that the campaign has promised to accomplish in the office.

After the performance, Tim Kaine came onto the stage and immediately praised Matthews for his humanitarian efforts including his Bama Works fund that donates to Charlottesville area nonprofit organizations.

As Kaine spoke, Matthews sat on the stairs and stared at Kaine for his entire speech.

Kaine started out his speech talking about the second presidential debate. He described Clinton’s performance in the debate as “steady as a rock” and insulted Trump’s performance.

“I’m glad she added me to the ticket,” Kaine said about his nomination as the vice presidential candidate for Clinton.

During his speech, Kaine addressed several issues that seemed to be targeted for a Colorado audience including climate change, equal rights, affordability of college and progressive values.

Kaine continued the theme of the event about immigrant acceptance by comparing the diversity of people in the U.S.

“We are a beautiful tapestry because everyone adds the beauty of life,” Kaine said.

Kaine labelled the Democratic Party as the underdog party.

To close out his speech, Kaine stressed the importance of voting in Colorado, calling it a “critically important state.” He told the crowd to go to iwillvote.com and to volunteer for the Clinton campaign.