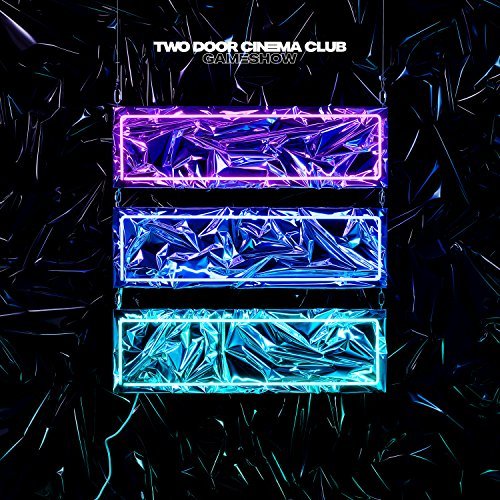 Alternative synthetic rock is something that for the most part has become relatively well received in recent years. Most bands rise to the top with this genre without much recognition, and we hardly see multiple successful releases in the genre. However, there is one band that has managed all of that and more. Two Door Cinema Club has been so closely associated with the genre for recent years that it is hard to imagine it without them. Now, after four long years, we have “Gameshow,” the follow-up record to the critically acclaimed “Beacon.”

Based out of Northern Ireland, Two Door Cinema Club has traditionally been labeled as indie pop, which is a label that is a little unfair to some of their music, but more than fair enough to justify the influence of Alex Trimble, Kevin Baird and Sam Halliday, the band’s three members. In the band’s short history, they have managed to take over aspects of pop culture with only two albums. “Tourist History” was released in 2010 and helped give the band some mainstream notoriety as the new kids on the block. It wasn’t until two years later with the release of “Beacon” that the band got some serious recognition for their work. Finally, they were reaching the top of the charts in multiple countries around the world. Most their music was being used in everything from films and TV to video games. There is a good chance you have heard some of their work and not even realized it. After touring and the release of another E.P., we have the band’s third studio album.

“Gameshow” is a 10 track record that clocks out to be around 40 minutes long. From front to back, it’s meant to be more of a dance record than its two predecessors. You won’t get much progression on this record, but you never really had much progression on the last two records either. At least for this record, the tracks are different enough where they just don’t blend into one homogeneous track. There is just enough there to have something stand out, but it doesn’t mean that it isn’t a commercial record.

Musically, the use of synthesizers is the main driving factor for everything. “Gameshow” as a whole is seemingly less risky than anything else. There is a ton of pop-funkish rock here that is more reminiscent of something from the mid to late 80s than anything from this century. When you look at tracks like “Are We Ready? (Wreck)” and “Invincible” you can see the influence of some of last century’s music on the record. The rhythm is more or less the same throughout the whole record because it is designed to get the listener on their feet and moving along to the beat. It becomes more apparent when listening to “Fever” or “Ordinary.” I wouldn’t call the melody anything but basic. The whole record is built on this generic, radio single era style. For the most part, it works for the band, but it doesn’t drive a whole record.

Lyrically, this is where the record becomes one in the same. It isn’t even that different than the last two records. It doesn’t matter if you are listening to “Je Viens De La” or arguably the most standout track “Gameshow” where it’s not so much about the subject matter as it is the delivery. Trimble on lead vocals is pretty strong. On this record though, his vocals begin to take a back seat to the rest of the music. Trimble really only has a couple of standout tracks on his side like “Good Morning” and “Lavender.” The main point here is that this is more of a dance record than anything else, and the lyrics are not nearly as important when it really comes down to it.

Should you listen to it?: Maybe

“Gameshow” is a fun and enjoyable record to listen to. Is it for everyone? No. It’s a basic generic synthetic pop record made for the radio. If you have been a long time listener of Two Door Cinema Club, you should definitely pick this record up. If you want a chill dance track, however, this record has some of that too. “Gameshow” isn’t different, but it is also not completely safe.

If you want to catch Two Door Cinema Club live, you can see them in Denver on Monday, Nov. 28, at the Fillmore Auditorium. Tickets are available at twodoorcinemaclub.com.