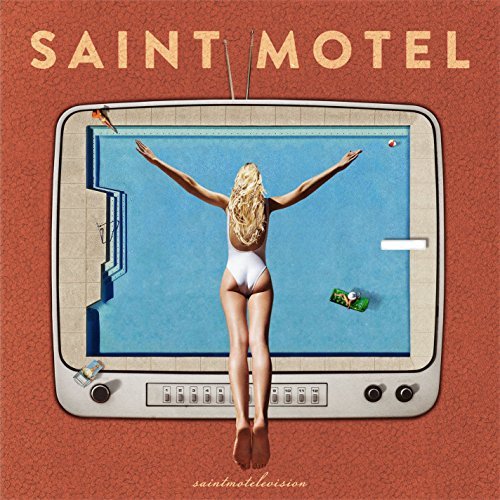 To most indie bands today, success is often defined by becoming a one hit wonder. For Saint Motel, their success seemed to be limited to their massively acclaimed single “My Type.” The band was mostly unnoticed by major outlets following the release of their first album “Voyeur” back in 2012. Now, most people recognize the name of one of the hottest indie bands to take over airwaves in recent years, and all in anticipation of their newest release “saintmotelevion.”

Los Angeles-based Saint Motel is best described as an indie rock band. However, pop is better suited to represent the bands musical styling. It isn’t often you see a band gain much critical acclaim from a E.P., yet that was exactly the case after Saint Motel’s release of “My Type” in 2014. The E.P. climbed multiple Top 40 lists around the world. Now, with a whole new momentum behind them, we have finally reached the release of their sophomore release “saintmotelevision.”

“saintmotelevison” is a 10 track record that clocks out to be just around 32 minutes long. From front to back, it is a pretty strong indie album that is best described as a dance-pop record. This is the band’s debut release under Elektra Records. The same record company that notable acts such as Love and The Doors have been signed to. We see much of Hollywood’s influence in this record. From past L.A.-based bands to the glamour and showmanship of the entire record. Everything about this record has a purpose. It is designed to deliver you a experience and unique listening than anything else.

Musically, “saintmotelevison” might officially fall under the alternative label, but it should really be classified as a dance-pop or even pysch-rock filled album. Influences of past eras reflect in the music, and there is a blend of modern synthesizers with the rhythms and tempos made standard back in the day. From the first track we see that the tone of this record is set to be very upbeat and fast paced with the aptly named song “Move.” Saint Motel delivers on trying to inspire the listener to either get up on their feet or just nod along to the beat of the song. All the tracks really try their hardest to stand out from one another, whether you are listening to the brass in “Destroyer” or the piano-centric “Local Long Distance Relationship (LA2NY).” The record speeds along and has trouble slowing down. It’s always on the up, and before you know it, the 30 minutes are up and you keep coming back to listen again and again.

While the musical stylings of the record may have been complex, the lyrics are a lot more basic in every way possible. The main themes here focus on relationships and that’s really about it. It doesn’t matter if it’s “For Elise” or “Getaway,” everything about the lyrics is trying to be relatable. The only track that stands out and maybe not for the right reasons is “Born Again.” The religious undertones are less than subtle in this track, and the overall tone of the whole thing makes it the most awkward part of the entire record. While it is not nearly as bad with any other track, nothing really shines like “Happy Accidents.” Overall, lyrically there isn’t much depth or substance to the record.

Should you listen to it?: Yes

While it isn’t the most compelling record that has been released in the last year, it is one of the most entertaining records to listen to. Its main goal is to get you on your feet and moving along to the music, and it succeeds. Saint Motel found a whole new rhythm following “My Type” and have used that to their advantage. While “Move” might be the overall standout track of the whole record, it isn’t all that hard to find something that you will enjoy. It’s a pretty strong record and worth at least checking out. Glamour is the name of the game, and Saint Motel are the ones making the rules.