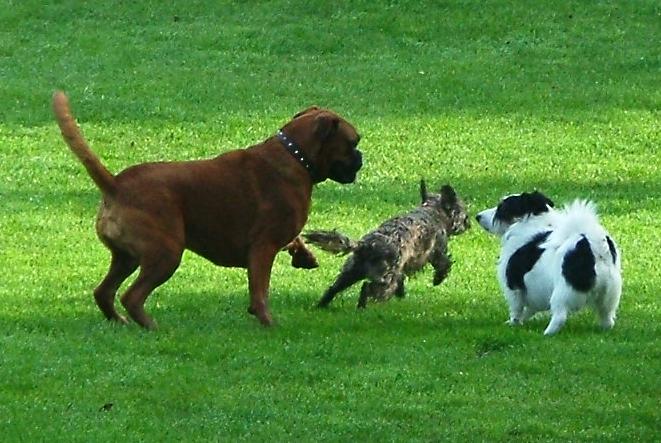 All dogs were welcome to compete in the events regardless of their skill level. The categories included catching games, obstacle games, retrieving games, running games, obedience games and a few fun trick games.

LAPP President Mary Fristoe was there to help organize the event as well as compete with her two dogs.

Fristoe said the purpose of the Doggie Olympics is to “build the bond with their animals and help them get out and do fun things.” It also serves as LAPP’s annual fundraiser,” according to Fristoe.

The event was sponsored by a number of pet friendly companies. Booths were set up for animal shelters, Colorado State University’s Pets Forever Club, dog photographers, veterinary clinics, pet stores and everything in between. The vendors handed out information and treats. Some booths were sponsors for the event and others made donations to the LAPP to be featured.

The LAPP is an organization that brings therapy dogs to places in the community where they are most needed through Animal Assisted Therapies.

Dogs of all sizes and ages competed in the Doggie Olympics, and a wide variety of breeds were represented including Great Dane, Australian Shepards, German Short-Haired Pointers, Springer Spaniels, Chihuahuas and many others.

Favorite events included the Frisbee Catch, the Classic Obstacle Course and the Monday Morning Obstacle Course where dogs had to get out of a bed, take a bath in a kiddie pool, get dressed by their owner and run out the gate as fast as they could so that they didn’t “miss the bus.”

There were a lot of different things for the dogs to jump onto and over, multiple toys to retrieve from water and land, and many, many distractions the dogs were tasked with ignoring while obeying their owners.

There was also a special event for dogs to show of their personal best tricks for the crowd. Some dogs jumped through hoops, some put their own toys away and one dog even balanced on his owners feet while she laid on her back.

Some dogs went through the games with ease, making their owners proud. Other dogs weren’t so concerned with the obstacles because they wanted to find the treats and make friends with dogs from outside their neighborhood. The hot dogs were just too inviting. Their owners were still just as proud.

The Doggie Olympics is the LAPP’s biggest event of the year, but there is always next year. So start training your pups now, and they might win next year’s gold medal.

For more information about the LAPP, go to www.colapp.org or find them on Facebook.