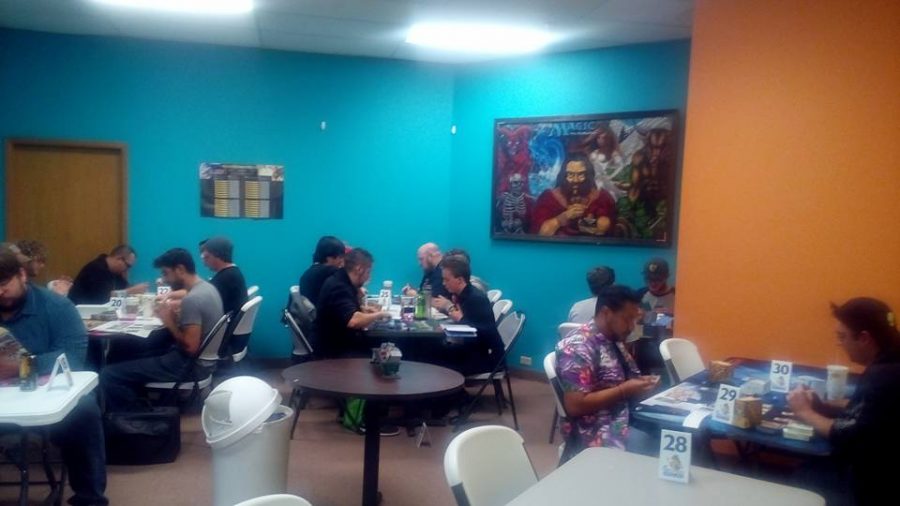 Gryphon’s Games & Comics in Fort Collins attracted over 200 people at a pre-release event held this weekend for a new Magic the Gathering set.

Friday night’s midnight pre-release event started off the weekend with roughly 35-45 people who signed up for the “Sealed” version of the pre-release.

The terminology used for Gryphon’s Magic the Gathering pre-release breaks down into two sections: “Sealed” and “Two Headed Giant.”

“Sealed” is where each attendee opens their pre-release box to discover their random promo card and six booster backs. All of the cards in the set have never been seen before, and no one knows what they will get upon opening the packs. Once that is done, each player then constructs a 40 card deck using those cards and participates in a six round tournament with other for a chance at winning prize packs.

“Two Headed Giant” is the same thing, but done in teams, so the matches are two vs. two instead of ones vs. one.

Compared to last pre-release that drew roughly 150 people two months ago, this pre-release is expected to attract more. This is mainly due to the set’s art style of bright vibrant colors and the new and returning gameplay mechanics.

“The set has a gorgeous art style,” said Austin, an employee of Gryphons.

“(The set) is appealing to players of every style because no color is unplayable,” said Donald, another employee.

New mechanics that were introduced into the set include new creature types called “pilots” that need other creatures to crew them for power boosts, “energy” that is a resource in the game that can be used for a wide range of things and a returning creature type called “dwarves.”

With no color being weak or unplayable, each card in Magic is colored to follow suit with a certain deck and play style.

Gryphon’s is expected this upcoming pre-release set to be its biggest event yet.

“It’s a great community here,” said Gryphon’s employee, Isaac. “Everyone comes together to trade and play matches against one another.”

Upon attending the sealed pre-release event on Saturday, anticipation filled the air as everyone was eager to see what cards they would pull from the packs.

Every card has its worth with most cards not being worth much in currency standards, while others held a high dollar value with this set’s best card being valued at $60.

While the value for some cards were higher compared to others, player’s decks for the tournament were not solely based on card value as much as they were with complimenting the deck.

The players with winning records at the end of the tournament were rewarded several price packs for having decks whose cards may not have been valued at much, but each card worked together to make the $30 spent on the pre-release well worth their money.

The winners for the second and fourth rounds won a respective prize pack, and while this was good for some players, there were many players who never won those rounds but won other rounds that there were no prizes for.

The event was structured differently at Gryphon’s compared to other stores where players said the winner of each round walked away with a prize pack and at least one or two “pity” packs were complimentary to every player who attended the event.

Despite the majority of players who left disappointed with the structuring of the event, it was a worthwhile experience.

“It was fun and energetic,” said Edward, an attendee. “It ran a little long and could have been capped at 5 rounds instead of six, but overall it was good.”

The event that began at Saturday 6 p.m. on Saturday ran until 1 a.m. Sunday for players who stayed until the very end.