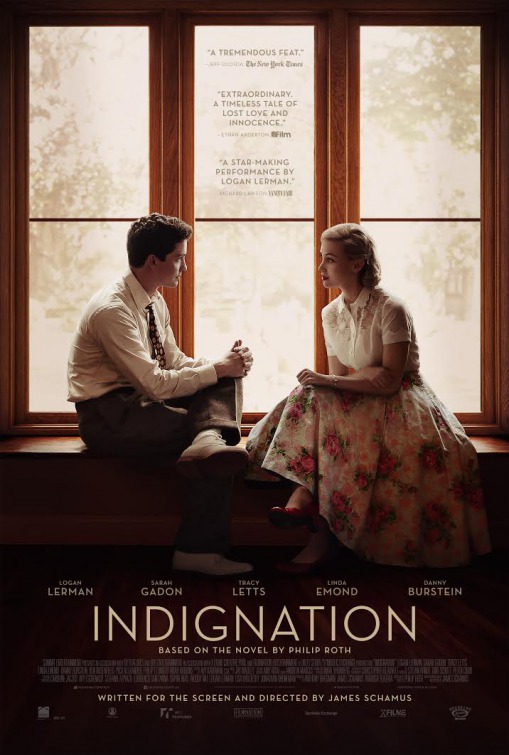 Based on the novel by Phillip Roth, “Indignation” takes place in the early 1950s during the Korean War. The story follows Marcus Messner (Logan Lerman), who decides to attend college on scholarship, avoiding the war draft. After arriving to college, Messner, who was raised by a working-class Jewish family, becomes heavily targeted by the dean (Tracy Letts) for his religious views. Messner also faces new feelings of adoration for a fellow student, Olivia Hutton (Sarah Gadon), and a love story unfolds. The film follows the ups and downs associated with Messner’s experience in balancing all of these outside factors with his new found college life.

“Indignation” is a very well-rounded film. It is believable and relatable. The film covers topics that we all endure. From falling in love to finding your beliefs, “Indignation” captures the universal difficulties of being a young adult. The film also covers the challenge of wanting to make your loved ones proud of you, but struggling to do so while staying true to yourself.

I particularly enjoyed the plot of this film. I have always been a huge fan of the 1950s, and I think this film captures the feelings of that era perfectly. I also just love the take it has on what it actually means to be in college. A large majority of films show college as a time to party. And although there is nothing wrong with having a little fun, this film shows the other side. The side where we challenge others and ourselves with our beliefs.

I felt very drawn to the film as I watched it, and when it was over, I was left with a lot to think about. This was mainly due to the religious aspect of the film. It was interesting to see how much has changed when it comes to the role of religion in schools.

The title “Indignation” matches the film perfectly. Once you see how angry and frustrated the protagonist feels from being forced to partake in activities that he doesn’t want to, you will begin to feel for him. It may even remind you of a time that you were upset by something that you thought was unfair treatment.

If you are tired of all the remakes being released by Hollywood this year and would like a new story, you should definitely see “Indignation.”

“Indignation”will be screening at Lyric Cinema Cafe, located on the north side of Old Town, now through Sept. 1.