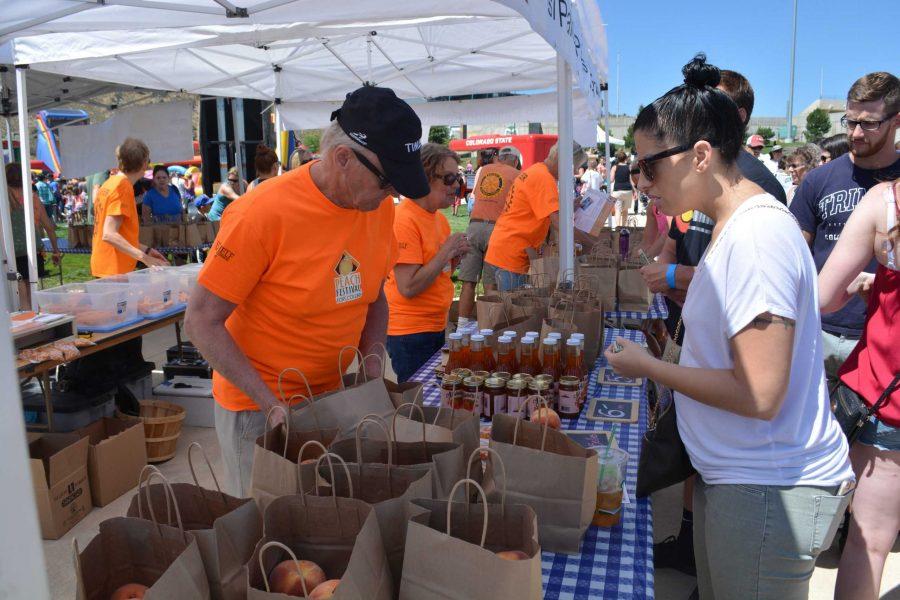 With summer coming to a close and the start of a new school year, the mood among students can be bitter sweet. Fort Collins’ sixth annual Peach Festival let attendees taste the sweetness of summer one last time.

Presented by the Rotary Clubs of Fort Collins, the festival got people of all ages outside under clear blue skies to experience everything peaches.

“An event like this starts out as a small concept, a small idea, at a local club,” said seven year Rotarian Ken Grack. “It’s an event that got bigger every year.”

The annual event started in 2011 at the Gardens at Spring Creek and had a turnout of over 3,000 peach lovers. Looking for a larger venue, the event moved to Hughes and continued to grow every year. By the fifth annual festival, participant turnout surpassed 15,000 attendees.

Numbers for this year’s event have not yet been released, but the Fort Collins Peach Festival Facebook page shared a post, which described this year’s successful turnout: “This was by far our BEST year yet, and it wouldn’t be possible without all of you. Thank you from the bottom of our hearts.”

The festival had over 60 sponsors including CSU, which helped the rotary raise money for service work.

“We got more and more contributions from people and businesses in the community that wanted to help support us,” Grack said. “We’re just an instrument to do service around the world and service in the community.”

Money raised went straight back to the community to ensure that all third graders in Fort Collins would receive a brand new dictionary. Peaches were sold by the bag ranging from $5 to $40 for a box. With every box sold, a dictionary could be given to children in the community.

Walton, who made her first appearance at the festival this year, brought eight unique scented peach soaps, such as peach cobbler and peach lavender, as well as peach lotions, essential oils and lip balms.

The festival also featured the Wolfpack from NBC’s America Ninja Warriors. Wolfpack members Ian Dory, Meagan Martin, Brian Arnold and Noah Kaufmann came out to meet and greet, as well as show off their skills on a miniature, yet challenging obstacle course. The group is making it their mission to reduce the growing childhood obesity and diabetes epidemic and encouraged everyone who came out to try out their course.

The festival would not be complete without the peach and peach pie eating contests. With four contests throughout the day, raffled contestants were chosen to sink their teeth into fresh Palisade Peaches or devour an entire peach pie within five minutes, forks and knifes optional. All contestants walked away with their own commerative Palisade Peach and full bellies.

The event, made possible by the Rotary Clubs of Fort Collins, encourages community members, including CSU students, to get involved with rotary work. Go to rotarycluboffortcollins.org for more information.