CSU kick-starts the semester at RamFest, The Head and The Heart headlines 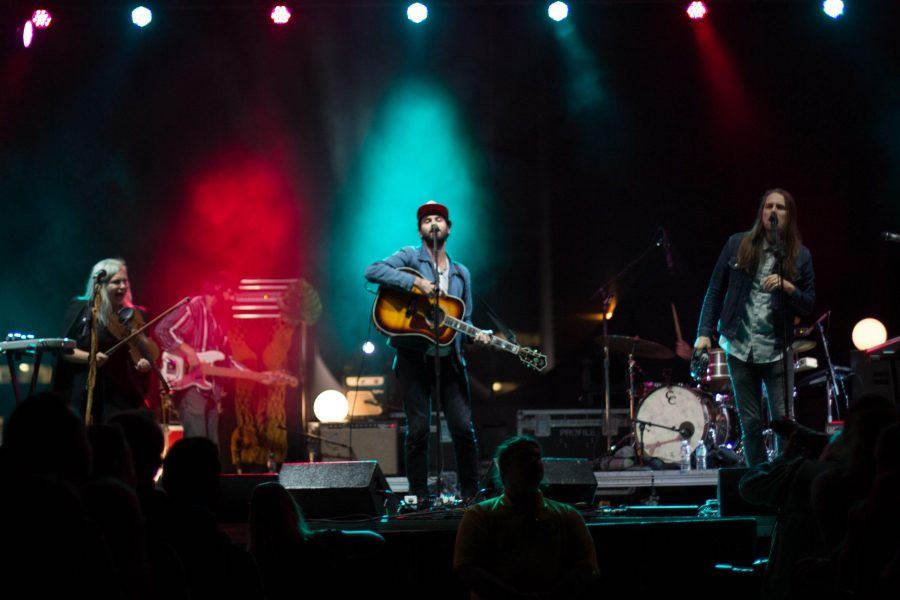 Jonathan Russel, guitarist of The Head and the Heart, plays during RamFest. (Chapman Croskell | Collegian)

As the first week of classes ended, students at CSU trickled through the gates of the stage area at RamFest, the annual concert organized by RamEvents. Fans who gathered were treated to food trucks from Corndoggies, Ba-NOM-a-NOM, The Silver Seed and Austin Taco.

As the crowd waited in anticipation for the music to start, the first opener took the stage: Coleman Hell. Hell, from Ontario, Canada, worked his magic to get the fans fired up with his high-energy performance and electronic rock sound. His songs used a combination of electronic melodies alongside heavy drumbeats.

Hell constantly engaged with the audience, asking which side of the crowd is more excited, and both sides roared.

“There’s something about Colorado that feels spiritual,” Hell said to the audience.

The band ended their performance with the song “2 heads,” which had attendees singing and dancing along. By the time Hell left the stage, the crowd was getting hungry for more music.

The second opener, R City, completely changed the sound around.

The group’s DJ appeared on stage first, donning a black jacket, bow tie, purple mohawk and a black mask. As he started spinning, music and the bass started pumping through the IM fields. The crowd went wild when R City’s two members ran out on stage. The duo, consisting of brothers Theron and Timothy Thomas hailing from the Virgin Islands, is best known for writing songs featuring other performers such as “Locked Away” featuring Adam Levine.

During the show, R City pointed out just how many top-40 songs they had worked on, saying “bet you didn’t know we made this,” while playing songs including Miley Cyrus’ “We Can’t Stop.”

By the time R City left the RamFest stage, the sun was setting and everyone in attendance was excitedly awaiting the headliner.

Following a brief cameo by Cam the Ram, The Head and The Heart took the stage to a thunderous applause. The Seattle-based band sounded perfectly at home in Fort Collins.

“I love the signs on the ground with a dude with rollerskates around his neck and carrying a skateboard,” said Charity Rose Thielen, who plays violin and sings in the band. The group stopped at CSU Friday night before their sold-out Red Rocks show on Saturday.

The Head and The Heart brought a sort of laid-back energy to the performance that matched the feeling of finishing the first week back to school. With intricate piano, soothing violin melodies and group vocals driving their sound, the crowd was singing and dancing along to hit songs such as “Ghosts” and “Lost in my Mind.” The band also premiered a new song called “Colors” for the first time, saying that they hoped all the rams in attendance liked it.

The band finished the performance with “Down in the Valley.” As the band left the stage, the crowd cheered for an encore. After a few minutes, the band returned and played the song “River and Roads,” which featured a heartfelt vocal solo by Thielen. The band seemed super excited to be performing at RamFest, and fans in attendance seemed satisfied to have ended week one on such an exciting note.