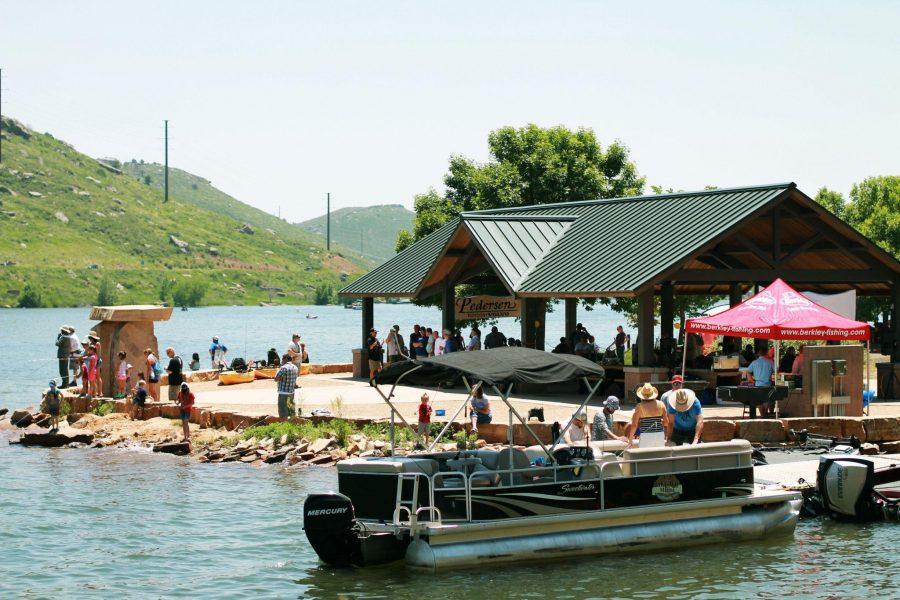 In its fourth annual year, the Fishful Thinker’s FishFest brought out more than 100 locals to the shores of Horsetooth Reservoir to learn about new techniques and try them out on the water. The event was coordinated by Chad LaChance, who hosts the World Fishing Network TV show “Fishful Thinker,” which is now in its 15th season.

The event boasted over $2000 worth of raffle prizes, which FishFest donated to the Fort Collins Boys and Girls Club.

An array of various vendors and anglers alike came out from noon to 4 p.m. to present breakout sessions, fish in the reservoir and teach new techniques and skills to the crowd.

Ronny Castiglioni, a guest host on Denver ESPN’s Terry Wickstrom’s Outdoors, offered tips on the best type of lure to use specifically at Horsetooth when the water level is high.

Jim Stawbridge, president and owner of Galaxy Custom Rods, offered his services and expertise as a custom fishing rod maker. While his job as a custom home builder brings in the money, Strawbridge said he treats the custom rod business as a legitimate side gig.

“I started looking at good quality rods… and they were running 300 or 400 dollars for some of the top names,” Strawbridge said. “I figured if I can build a home, I can build a rod.”

Strawbridge said every person looking to take their fishing ability to the next level should learn how to build their own rod.

“Rodbuilding isn’t as hard as you think it is. It’s just about having the confidence to understand what you are doing,” Strawbridge said. “You’re gonna have mistakes, you’re gonna have learning curves… but get the guidance to do it.”

Whenever someone at the event caught a fish, LaChance made sure to give them a reward. Unfortunately, one girl lost her fish right as she was about to bring it out of the water, watching it leave the hook right as it breached the surface, but she still received a reel for her effort.

LaChance puts on the event each year with the help of the Fort Collins City Council, who allow him to use the space at the south beach of Horsetooth Reservoir without payment as all proceeds from the event go to charity.

Rocky Mountain Collegian Editor Erik Petrovich can be reached at editor@collegian.com or on Twitter @EAPetrovich.