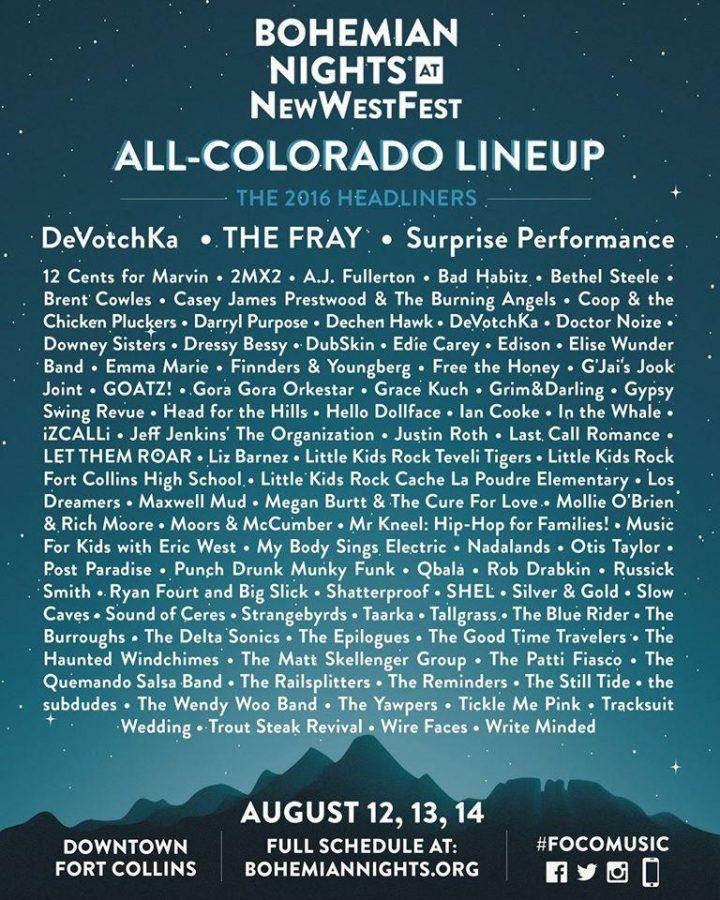 You know what is better than one free day of music? Three free days of music. Not just any music either, but three days of all local Colorado-based music. From new up and coming artist to national headliners, you can catch them all right here in Fort Collins in August. Beginning August 12 though 14, over 80 local bands will take the stage in downtown Fort Collins for the annual Bohemian Nights at NewWestFest, and each of the three nights will feature an overall headliner.

“Bohemian Nights is about showcasing new, emerging and established Colorado artists, and this year’s festival is truly a testament to the tremendous talent pool in our state,” said Bohemian Foundation Music Programs Director Tom Scharf in a press release.

Bohemian Nights at NewWestFest will feature classic big name Colorado bands like The Fray, who will be headlining Saturday night. It will also feature bands that are best described as up and coming like My Body Sings Electric. The festival has such a large variety in genres this year that anyone will be able to easily come out and have a great time.

This year’s lineup will perform on a total of six stages, and one of the stages on Saturday and Sunday will be dedicated to family friendly acts.

Beginning on Friday night, eight bands will perform, including a special reunion show for Fort Collins-based band Tickle Me Pink. Here are the other bands performing Friday night:

On, Saturday there will be a total of 44 acts. Here is the lineup for Saturday:

Finally, 34 bands will finish the festival on Sunday including a surprise headliner that will be announced later in July. Here are Sunday’s acts:

Go to BohemianNights.org for more information about Bohemian Nights at New West Fest, or download their app.