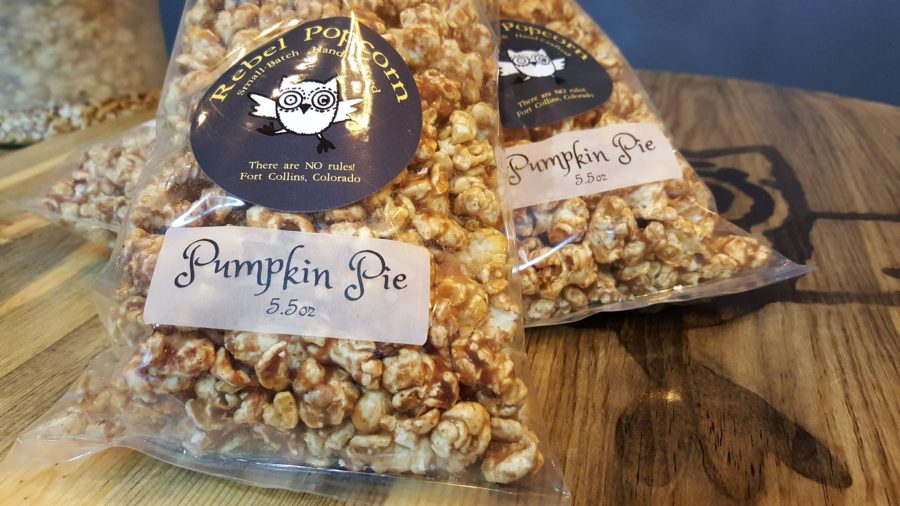 Rebel Popcorn began when co-owners Elizabeth Solley and Heather McQueen were looking for a new project to take on after their youngest children headed off to kindergarten. Solley said the initial idea was to create a granola company.

“Our husbands were both home brewers, and they had all of this grain left over from brewing that that wasn’t being used for anything,” Solley said. “Well, we found out why people don’t use them. Those grains were a pain.”

After making this discovery, the couples decided to sell the granola they had already made at a craft fair and think of a new idea. Just as any avid foodie would do, the couples cooked up a unique concoction to handout while they were at the fair.

“We decided to throw in some popcorn with granola clusters at the last minute,” Solley said. “Everyone thought it was the best popcorn ever. They wanted to know why we weren’t selling the popcorn, and we decided that we probably should be.”

Rebel Popcorn was born. The couples began cooking popcorn in a commissary kitchen and selling it at local farmer’s markets around Northern Colorado. The success of this small business was evident immediately.

“We were growing our business and doing whole sale before we even opened our store,” Solley said. “Odell’s Brewery was the first brewery to take us. One brewery heard about us and then another one heard about us. It just grew from there. We are now in 35 stores.”

Throughout the process of selling popcorn at farmer’s markets and breweries, Rebel Popcorn accumulated a large fan base. The couples quickly ran out of space at the commissary kitchen to meet the demands of their costumers. So in late October, Rebel Popcorn opened up shop, with 130 flavors of popcorn to purchase.

“We use super jumbo mushroom popcorn,” Solley said. “It pops like brains. It is giant and beautiful. It doesn’t break. And it is really nice and crunchy. We hand make it fresh every week. We use whole ingredients and whole spices.”

Rebel Popcorn’s flavors ring true to their slogan, “There are no rules.”

The available flavors range from birthday cake and dill pickle to beer cheese soup and Thai coconut. Sea salt caramel is Rebel Popcorn’s number one seller, followed by butter pecan and chai. Perhaps the most intriguing flavor is fear the reaper. This flavor creates the hottest popcorn in the world through a heavy coating of Carolina reaper spices. Rebel Popcorn also offers a wide array of holiday flavors, such as gingerbread and eggnog.

Solley said the couples and their children are always keeping their eyes open for new and interesting flavors.

“We are all big foodies,” Solley said. “Our friendship grew over food. And we think that anything in food form needs to be in popcorn form. My husband used to be a flavor chemist. He definitely pulls from that knowledge in creating the flavors. We just mix spices until we get the right taste. It is a lot of trial and error.”

Rebel Popcorn is definitely a rapid growing trend in Fort Collins, as made evident by the immense success the couples have already experienced. And although they intend to continue growing, Solley said that remaining a community-focused business in their main goal.

“It’s two families and we do everything ourselves,” Solley said. “It is important to us they we stay a small business and give back to the community. We can do donations and fundraisers as much as we want. It is really fun to have that freedom. It is a big part of our company.”

One of the ways Rebel Popcorn stays active in the community is by offering a chance to win free bags of popcorn through challenges and games in their store. In addition to selling popcorn, Rebel Popcorn offers catering services for parties and weddings. They also ship worldwide.