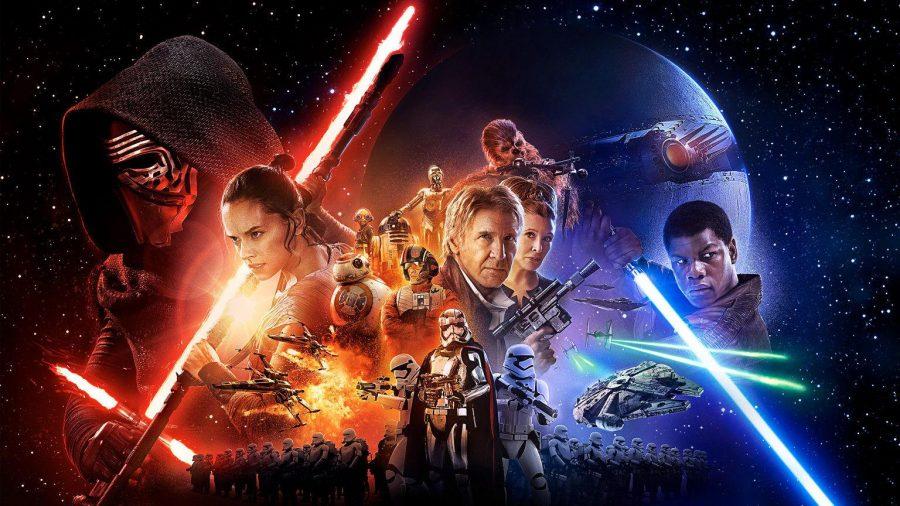 As a note, this review is completely spoiler free, because I want everyone to experience the events of the film on their own.

To many, “Star Wars” is one of the most significant and influential stories of all time. It is a saga that spans generations, and is deeply rooted in nerd culture. With this being said, the newest film in the franchise, “The Force Awakens,” has a lot of hype to live up to.

“The Force Awakens,” which opened Friday, marks the start of a new trilogy that directly sequels the original films from the ’70s and ’80s. Directed by J.J. Abrams, known most recently for his Reboot of the “Star Trek” series, this new story follows old characters and new 30 years following the events of “Return of the Jedi.” The fall of the Empire has given rise to the threatening new First Order, Led by Kylo Ren (played by Adam Driver) and the sinister Supreme Leader Snoke (played by Andy Serkis). Finn, a stormtrooper (played by John Boyega) and Rey, a scavenger (played by Daisy Ridley) are drawn into the conflict between the First Order and the Rebellion, and find that their lives will never be the same. The setup of the plot is interesting, and is a fresh take on the Star Wars story, while still maintaining ties to the old story.

I personally struggled a bit with the cast and the characters. I did love Boyega as Finn, and I like the idea of a stormtrooper leaving the First Order and struggling with the moral dilemma faced with that decision. I’m excited to see  Boyega become well-known for his acting ability in this film. The x-wing pilot Poe Dameron, played by Oscar Isaac, was also fantastic, and he feels like a new-age Han Solo with his rougeish charm. However, I’m honestly not sure how I feel about Rey yet. I loved Ridely’s performance, but Rey seems to be inconsistent with her emotions. However, I will absolutely admit that I went into the film with an expectation for Rey that I had gathered from the trailers. Overall, I’m curious to see Ridely develop as an accress. Driver was absolutely the best of the new cast in my opinion. Rather than the power that Darth Vader exuded in the original films, Kylo Ren has a sort of madness in his power that makes him terrifying. The character has a lot of depth, and is probably my favorite “Star Wars” villain since Vader.

The returning cast was also a bit jarring for me. While I cheered as loud as everyone to see Harrison Ford and Carrie Fisher return as Han Solo as Leia Organa respectively, I felt as if the characters were more references to themselves than the characters themselves. Unlike the new “Star Trek” films, where Leonard Nemoy playing an older Spock felt like a callback to the original series, trying to imagine Ford as the same smuggler from the original movies and not as Ford playing a special guest character was difficult for me. Fisher and Ford simply didn’t feel like they belonged in the universe to me anymore, which is sad considering that they are the reason I’m a fan in the first place. Overall, I really did love the characters, and I was happy that they brought back classic actors to play many of the parts.

As far as the film itself, it looks simply amazing. To me, it felt like Abrams found a happy mixture between the practical effects of the original series and the CGI we are so accustomed to these days. Many of the alien characters are real costumes, and it was refreshing to see many species from the original series still looking like muppets. One of the biggest complaints of the prequel series is how much of the film was CGI, and it’s obvious that Abrams learned from that mistake. The times that CGI is obviously used, it’s used exceptionally well, and many of the space scenes look mesmerizing. The movie was also filmed with actual film cameras, and although the difference is subtle, it does give a certain nostalgic feeling.

Speaking of nostalgia, the film is riddled with it. Obviously this is a series that wanted to play off of the fans of the original movies, and it was done well most of the time. Plenty of the character and object introductions are done flawlessly, including one that had the entire theater nearly in tears because we were cheering so hard. Most of the references are to the original trilogy, and it was an amazing experience to have both myself and my father, who attended the original movies when he was my age, giddy in our seats because we were seeing our favorite characters on screen again.

However, without spoiling anything, this nostalgia at times is unnecessary. While I loved the nods to the old films, It would have been nice if some plot elements hadn’t felt so recycled. Certain scenes are predictable due to their similarity to the old movies, and I’m hoping they get away from this as the next two films come out and the hype is less. Overall, “The Force Awakens” is a classic fan’s dream come true as far as throwbacks to the old films go, and seeing the premiere with a group of classic “Star Wars” fans was an experience I won’t soon forget.

Simply put, the best thing I could say about “Star Wars: The Force Awakens” is that it feels like “Star Wars” should. I’m more excited to see this trilogy play out than I have for a franchise in a long time, and I’ve rarely been so excited for a premiere that I arrived five hours early, and felt that it was absolutely worth it. This movie is completely worth seeing for anyone, classic “Star Wars” fan or not, and I recommend seeing it as soon as possible, because the spoilers are something that everyone should experience on their own.