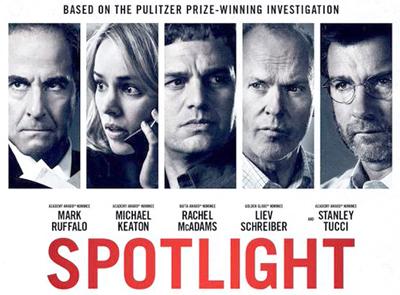 The beauty of “Spotlight” is how the film takes us from essentially nothing to one of the greatest revelations in modern journalism.

At first, it is admittedly cliché. Editing and cinematographic choice are standard, and don’t draw attention to themselves. The dialogue seems unimportant; the lines are typical. Each character seems to be a regular guy you could meet on the street. But, as you’ll discover, this is intentional. The transformation of each of these elements into one of the most powerful endings in recent memory is certainly an accomplishment.

The majority of attempts to expose corruption are so unfortunately often met with defeat. That’s why the Boston Globe’s victory with this story on child abuse by Catholic priests was so refreshing. “Spotlight” faced the same dilemma as “All the President’s Men.” It told a story about something already heavily engraved in the public’s mind. “Spotlight” succeeds in the same way “President’s Men” does by making the story about the journalists themselves, using only their point of view.

Good art shows new perspectives on things, and in doing so, gives those things new meanings. This is what “Spotlight” is all about. By showing us details of the character’s stories; Sacha Pfieffer (Rachel McAdams) and Mike Rezendes’ (Mark Ruffalo) backgrounds with Catholicism, how Matt Carroll (Brian d’Arcy James) actually lived by an abusive priest during the investigation and how Walter Robinson (Michael Keaton) came to terms with the fact that he was the one who passed the story on the priests five years prior. And all of these actors portray their counterparts with so much accuracy, and so much honesty, you quickly forget three of them are some of the biggest stars on the planet. That is after all the point of acting — to mask your own persona with someone else’s.

Of course, it isn’t just about these four people. We are shown conversations with survivors who will break your heart, as well as lawyers and priests who will make your blood boil. Of course, these things are not dependent on film to create an emotional impact, although seeing their faces and hearing their tones of voice certainly helps. We could feel the same response from the newspaper article itself.

The fantastic film decision here is the choice of scene location. We are always in the streets of Boston. And as we are taken further into the story, and the characters find out more and more about the powerful grip of the Catholic Church on the city, so the Church takes hold of the film. Many of the exterior locations have churches in the background. This is not unintentional. In the beginning, you don’t notice this. But as the image of the Church as a corrupt institution takes hold, you notice the buildings as just that: buildings. Buildings which could employ pedophiles. Pedophiles who could endanger your kids. Then, more scenes with children playing in the background start to show up. Schoolhouses. Playgrounds. Churches. Sometimes all in the same shot. You cannot help but to cringe. And it is the film that inspires this cringe, not dialogue, not action, but pure film.

In addition to this is one of the most haunting montages since the baptism/murder spree in “The Godfather”. It’s a sequence of somber epiphanies among the main characters of how corrupt the Church actually is and how many children its priests have sexually abused, all set to a children’s choir singing “Silent Night,” in no other place than a church on Christmas.

At the end, the post-titles tell us the impact of the story in Boston alone. Then, in a brilliant move, it shows how many other scandals were found in other states and countries. The list goes on for what seems like hours. Hundreds of places. At this point, an oceanic feeling comes over you; for each one of these places, there must have been a group of people just as hard-working, just as passionate as the characters we’ve just spent two hours emphasizing and suffering with. I’ve never been so moved by seeing facts I already know.

“Spotlight” will play nationwide this Friday.

Collegian Film Critic Morgan Smith can be reached at entertainment@collegian.com or on Twitter@MDSFilms.